The Bachelor is never predictable. Just when fans think it’s going to swerve right, it swerves left — and vice versa.

Monday’s Season 25 finale was no exception. After tearfully breaking up with Michelle Young because he said he realized he wasn’t in love with her, the franchise’s first Black Bachelor, Matt James, met Rachael Kirkconnell by the lake and said he couldn’t propose to her. But he still wanted to be her main man because he is in love with her. He said he could see Rachael as the mother of his kids and that he wanted to make sure his love was enough. The two kissed and said they were going to start dating, like for real.

Before Matt said he couldn’t propose, Rachael told Matt she would choose him “everyday from here on out, if you’ll let me.” The road to kisses and promises was certainly bumpy.

UPDATE: During the After the Final Rose post show, it was revealed that Matt and Rachael split up. Click here for more info. 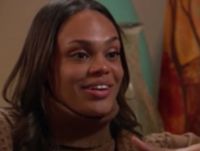 The finale opened with Michelle, 27, meeting Matt’s mother Patty and his older brother John. Rocking rap-tastic braids and gold grillz, John held a glass of white wine and grilled Michelle on her feelings. But John ultimately decided that she would be a good match for his younger bro. Patty also seemed to really like Michelle, saying that she could see why her son Matt had feelings for her. The meet-and-greet ended with Michelle and Matt enjoying a lighthearted snowball fight.

The next day, Rachael met Patty and John with the latter saying the connection between the two was tangible. Patty said she thought Rachael, 24, was cute and liked the way the two could be themselves around each other. A teary Rachael said she loved that Matt prayed for the group of women the first day, which made Patty cry as well. The love of God clearly matters to Matt’s mom. When it was all over, Matt kissed Rachael goodbye and said he felt relieved that his mom and brother liked her as much as he does.

But later, when Matt talked to Patty and John, Patty said she didn’t want her son to rush into anything because love is fleeting. This, of course, made Matt think about how his father let his mother down. (Dang, Matt’s momma! Your outlook is bleak.) Matt went to host Chris Harrison for guidance, and Chris basically said that Matt’s mom was tripping and that he should trust his heart despite his mother’s pessimism. Ultimately, Matt said he had to figure out if he wanted to propose to either woman. 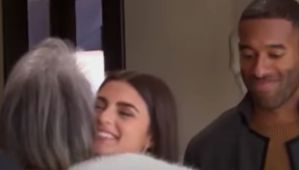 For anyone who has been watching Season 25, there is no denying the chemistry Matt had with Rachael, a graphic designer from Georgia. Matt took Rachael on multiple one-on-ones, including a shopping spree and skydiving date. During the skydiving excursion, which was part of hometowns, Rachael suffered a hard landing and badly bruised her face. This was when a worried Matt said he didn’t know what he would have done if something had happened to Rachael and his care and concern for her deepened. He also told Rachael every time he saw her that he had been thinking about her.

Matt met Rachael’s parents, Darrell and Kim Kirkconnell, who seemed to like their daughter’s suitor for the most part. But Darrell did voice his reservations about the speed of the process and the fact that Matt was dating multiple women. At the end of the hometown round, Rachael also expressed disappointment that Matt didn’t ask her parents for their blessing for a potential proposal. And when Matt took Michelle and then Bri on fantasy dates before her, Rachael really struggled outwardly with her feelings of insecurity, which she expressed with teary pouts during confessional interviews.

When the time came for Rachael and Matt’s fantasy-suite date, the two made ceramics Ghost style and had a heart-to-heart about Matt’s intensions. They wrapped the night with a romantic dinner where Rachael wore the dress Matt got for her during their spree and a Disney World level fireworks show that Matt’s two other prospects — who happened to be Black — did not get.

Rachael was also the one he looked at rings for and although he canceled their date that day, he was still thinking about her and considering what a proposal and ring would look like for her. Matt picked a beautiful pear-shaped ring and stared at it and said it represented what his father couldn’t give his mother.

As for Michelle, Matt clearly enjoyed spending time with her, too. Although the school teacher from Minnesota joined the show weeks after the original group, the pair wasted little time hitting it off. Their initial one-on-one included ziplining, a hot-air balloon ride and a deep dinner conversation about the police murder of George Floyd and the effect it had on Michelle’s students. Michelle and Matt also laughed a lot and shared a future vision that included a marriage with three kids. Matt often gave his first roses to Michelle and it was Michelle whom he told about his difficult but helpful reunion with his estranged father, Manny James.

Both former collegiate athletes, Michelle introduced Matt to her students virtually and her parents, LaVonne and Ephraim Young, in person. Although her parents also appeared skeptical of The Bachelor dating process, they trusted Michelle’s judgment when she said that despite the rapid process and other women, she loved Matt. Later, during the fantasy suites portion, Matt and Michelle enjoyed a Dutch spa day where they rubbed butter on one another and dipped their feet in oatmeal. 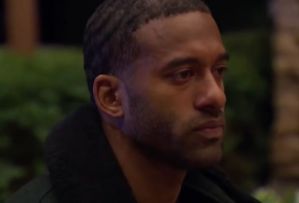 Their final date had them scaling down a tall building so they could sit on a couch and talk about Matt’s mom and brother by a warm fire. Michelle said she loved Matt’s mom and her honesty and then asked Matt about his emotional health. They kissed but Matt said he still wasn’t sure what he wanted to do even if Michelle was sure.

That night, Michelle gave Matt his and hers sports jerseys with Mr. and Mrs. James on the back and said he was the teammate in life and love she had been searching for. But a still uncertain Matt was like, “nope.” He said he couldn’t give Michelle the love she deserved and left them little jerseys on the couch. An understandably confused Michelle said she wondered when his love changed like the “flip of a switch” and Matt said it wasn’t like that. He just didn’t feel sure about her anymore. So, like a switch then. They both cried and hugged goodbye and then he was gone. He later cried some more and told Chris that he loved Michelle but wasn’t in love with her.