Spoiler alert: Turn back now if you haven’t watched the DuckTales series finale, which is currently available to stream on the DisneyNow app.

Scrooge McDuck and his flock of unflappable adventurers ruffled their last feathers on Monday with the highly anticipated series finale of DuckTales.

The reboot’s three-part swan song was full of satisfying developments, from the gang’s final battle against F.O.W.L. to the emotional reveal about Webby’s true connection to the McDuck family. But what we need to discuss right now is that incredible, chill-inducing cameo from Keith David, which finally (sort of) brought Gargoyles into the DuckTales universe. 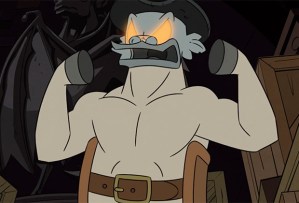 Among the episode’s many — actually, make that Manny — revelations, we learned that the hoof-clapping intern is actually a Headless Man Horse… of the Apocalypse! He was brought to life via the magic of the Blessed Bagpipe in a sequence that included a taste of the classic Gargoyles theme song, as well as David speaking his character’s iconic “I live again!” line.

“Manny the The Headless Man Horse turned into a cult favorite on the show and ended up turning into a major player in every finale,” executive producer Francisco Angones tells TVLine. “I always liked the idea that the strangest looking dude on our show just wanted to be a regular guy. Personally, he’s the most normal dude in the world. We were toying around with the idea of doing a family reunion episode — and maybe even a full Manny episode — in Season 3, and [executive producer Matt Youngberg] was the one who came up with the idea that ‘Well, of course, Manny is the Man Horse of the Apocalypse.’ And we also set up the Blessed Bagpipes, because we knew that Gargoyles was the one show we hadn’t touched.”

Gargoyles, like the original DuckTales, aired during the beloved Disney Afternoon block of programming throughout the 1990s. The DuckTales reboot has managed to work in nearly every other show from the lineup — including Bonkers, Chip ‘n Dale: Rescue Rangers, Darkwing Duck, Goof Troop, Quack Pack, TaleSpin and even Adventures of the Gummi Bears — but Goliath and his winged pals never made an appearance, much to fans’ dismay.

Angones explains, “We wanted to reference all of the Disney Afternoon shows, but it was tricky when those shows involved humans. With the exception of Quack Pack, we didn’t do humans. We’re not saying [Manny] is Goliath. It’s more of a fun little Easter egg. One of Matt’s favorite design elements in the entire show are those little claws that hook Goliath’s wings like a cape. Manny has tiny hooves attached to his. And Keith was just so game to do it. He said, ‘Anything to keep Goliath alive, I am here for.'”

The executive producer says it was harder to get outside Disney characters approved early into DuckTales‘ run, “but after [they saw what we did with] Darkwing Duck, they started to trust us a bit more. There’s a certain mouse that remained off-limits to us for corporate reasons, but other than that, they’ve been very supportive and understanding.”

“When you reboot something, you can’t just make more of something,” he says. “You have to make it the best version of the show you think you remember in your head, because kids have that imagination to build out those worlds. When I was watching the Disney Afternoon, because there were all these little Easter eggs hidden throughout, I assumed it was a shared universe. Just as DuckTales launched this golden age of the Disney Afternoon, we thought, ‘What if we took that made it literal?’ It felt like something that kids would want.”

Your thoughts on DuckTales‘ big sendoff? Grade the series finale below, then drop a comment with your full review.