Sunday’s episode of The Walking Dead put a whole new spin on “Look at the flowers” (as walker guts spattered dandelions). It trotted out some gnarly new grotesquerie (unless you can recall ever seeing the skin of a walker’s arms accidentally yanked off). And it introduced Robert Patrick as Mays. Yet it still managed to be a wild boar. Er, bore. Read on, and we’ll see if we can pinpoint why.

‘WHAT DOES GOD THINK OF YOU DRINKING AND GAMBLING RIGHT NOW?’ | As “One More” began, Aaron and Gabriel — the only two regulars in the whole episode — were near the end of the most dispiriting supply hunt ever. Aaron wanted to head back; he missed Gracie, and Maggie’s map of possible hot spots had been a nonstarter. Gabriel insisted that they check out, as the title suggested he would, one more — and was soon punished for his optimism: He was attacked by a walker while wading through muck, rendering what had been an almost useless map… well, totally useless. D’oh.

Soon, the guys happened upon what appeared to be an unoccupied warehouse in which someone had amassed a large number of Bibles. Mmkay. While Gabriel searched its office for booze, Aaron heard a noise in a back room. “My name is Aaron,” he said. “I’m a friend.” Receiving no response, he opened the door and shrieked. Gabriel, upon seeing that Aaron had found and killed a wild boar, cracked, “That was quite the scream,” then proceeded to laugh for so long, you might’ve thought the episode would otherwise have run short. (It didn’t.) That evening, they pigged out, played poker and got drunk on extremely expensive whiskey while the preacher schooled his pal like he was in a bourbon-centric version of Sideways. (Gabriel himself had been taught, if you were dying to know, by an old mentor, one who always said the right things to his congregation without it looking like he was trying.) 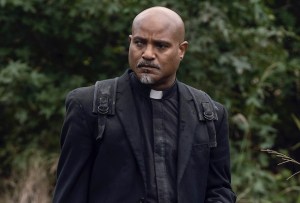 ‘EVIL PEOPLE AREN’T THE EXCEPTION TO THE RULE, THEY ARE THE RULE’ | The more soused Aaron and Gabriel got, the more intense their navel-gazing became. (Hey, been there… ) When Aaron encouraged the preacher to return to the pulpit, Gabriel’s response was so bleak, you’d swear he’d just lived through 2020. Later, after Aaron stole away to take a whizz, Gabriel woke up to find the sun out — and his friend still not back. “What were you cookin’?” asked a figure emerging from the shadows. It was Robert Patrick, his face a leathery mess of scars that only Dwight’s could possibly rival. As the stranger chowed down on leftovers, Gabriel endeavored to inquire about Aaron and his whereabouts. It didn’t go well.

The stranger, you see, was ticked that our protagonists had eaten his boar and drunk his whiskey. So sorry, said Gabriel. They thought the place was deserted. Mm-hmm, replied the stranger. “You figure that boar got into that room by itself?” One point for the stranger, zero for Gabriel. So sorry again, the preacher said, adding that they meant him no harm. At that, the stranger produced Aaron’s mace. “Does this say ‘no harm’ to you?” Two points for the stranger, who asked Gabriel why he wore the priest’s collar. Probably the same reason the stranger kept Bibles around, Gabriel reckoned — as a reminder of the good in the world. “Toilet paper,” said the stranger. “I like the thin pages.” Game, set, match to the stranger. 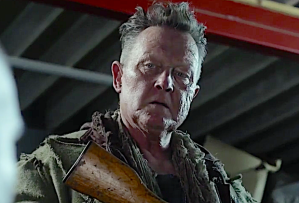 ‘A DRUNK TONGUE’S AN HONEST ONE’ | The stranger wasn’t buying any of Gabriel’s BS, anyway. He’d overheard all of the preacher’s cynical talk the previous evening, so he knew Mr. Holier-Than-Thou was full of it. He was close, though — to enlightenment, which the stranger hoped to provide by wheeling into the room a tied-up Aaron and forcing the men to play Russian roulette. Only they each had a choice: They could point the pistol at their own head… or their friend’s. “Winner,” the stranger said, “goes home.” Gabriel went first, aiming at his noggin… empty. Aaron followed suit… empty. Once more, Gabriel went. Nada. Then the stranger heard it. A revolver “makes a different sound when chamber loads,” he noted.

Desperate, Aaron pleaded with the stranger. He and Gabriel and their friends, they were like family. Blah, blah, blah, the stranger more or less replied. He’d saved his brother and his family countless times, and yet in the end, his brother had tried to rob and kill him. But, he added, his brother had given him something invaluable in that moment: enlightenment. Blah, blah, blah, you probably said at that point. (Just me?) Finally, despite his eagerness to get home to Gracie, Aaron moved to shoot himself, only to have the stranger stop him at the last nanosecond. Finally, the stranger allowed our heroes to convince him believe in them, in their community. He untied Aaron and revealed that his name was Mays. And with that, Gabriel bashed his brains in with Aaron’s mace. “It’s OK,” Gabriel told Aaron. “We’re good.” Meaning something altogether different, Aaron asked, “Are we?” 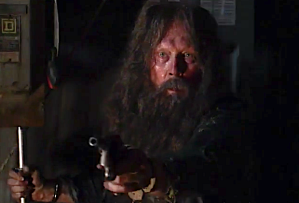 ‘HE MADE ME PLAY’ | As the episode drew to a close, Aaron and Gabriel looked around the warehouse to see where Mays might have been hiding to overhear them. Holy crap! Up in the attic was his chained-up brother and the remains of his brother’s family. Apparently, Mays had made his twin play Russian roulette as punishment for his treachery — and he’d killed his own family. “We are not going to hurt you,” insisted Gabriel (and who’d believe that after what just went on downstairs?!?). As he moved to untie Mays’ brother, the man grabbed his rescuer’s gun and shot himself in the head. So all in all, not a great trip for Gabriel and Aaron, who had to be going home more disillusioned than ever. What did you think of “One More”? A bit too much navel-gazing for me, especially if no lint’s gonna be found. Anyway, hit the comments with your reviews.