Warning: The following contains major spoilers for Sunday’s Shameless. Proceed at your own risk!

After 11 seasons of committed love, Shameless‘ Kevin and Veronica have finally made their relationship legally binding. In Sunday’s episode, Kev surprised his other half by decking out the Alibi in decorations and announcing that the courts were, once again, performing weddings, virtually. So wearing her mother’s wedding dress, a beaming V and Kev got hitched in front of a computer, her mom and their daughters. The monumental moment was made even sweeter by the fact that star Shanola Hampton, who plays V, directed the episode.

Looking back at the hour, the actress describes it as “the finale for the V and Kevin storyline in so many ways, because it wrapped up exactly the way Steve [Howey] and I wanted it to. Not with an open ending, not with a, ‘Oh, he’s still married,'” Hampton tells TVLine. “So for me to be the person that really wrapped that relationship up in the most beautiful bow meant so much to me, it meant so much to Steve, and I was honored to [direct] it.” 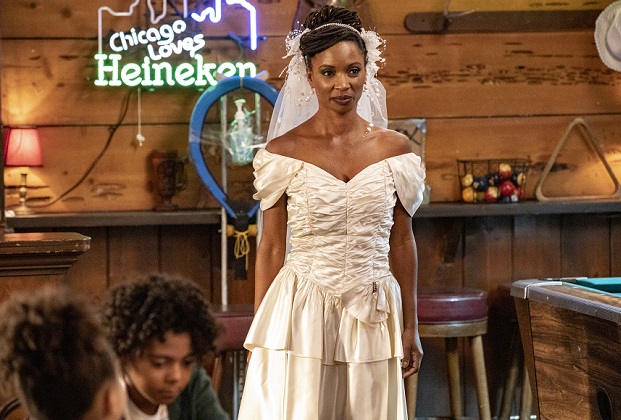 “There was something so cool about standing in the wedding dress and looking into Kevin’s eyes, and saying, ‘Are we going to do this? Are we really doing this?’ and him saying, ‘Yes,’ and then us walking over and doing it, then me going right into, ‘Cut!'” Hampton continues. “It was sort of a surreal moment to be in that moment and then also go back to directing it. It was quite funny and a feeling that I will not forget.”

Hampton credits writer Sherman Payne for setting up the scene “so beautifully” and singles out Veronica’s attire as a thoughtful touch. “I think it’s funny that she wears Carol’s dress, but also quite sweet,” Hampton says. “It’s ’80s, and it’s perfectly Shameless, but not necessarily V’s style, but then so perfect in the same way, because we’ve been waiting for such a long time [for them to get married],” so the “the symbolism of it being a long-time-ago dress” also works as a nod to how long “we’ve been waiting, as characters, to really seal the deal.” 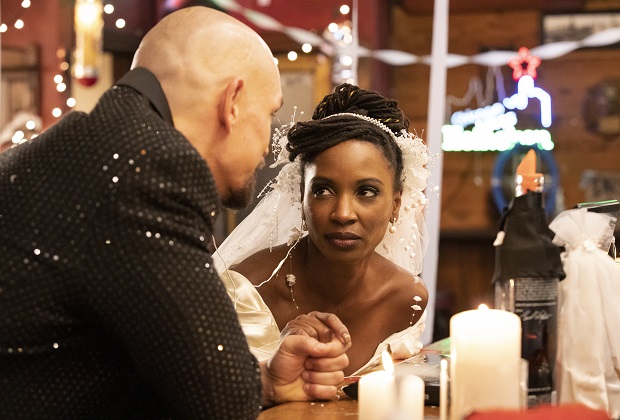 In helming Kev and V’s major milestone, Hampton “just wanted it to be nice and pretty and a simple love story,” she shares. “That’s the only thing I wanted to capture is telling the story in a way that was sweet and did justice to these characters that we’ve grown to love.”

Now that the couple is officially hitched, Hampton is feeling good about how her character’s journey wraps up with the series’ conclusion next month. “I love it. [Kev and V] are always each other’s everything-for-life. They are lifers,” Hampton says. “So it’s beautiful to have had the chapter that we have in Episode 8 and to know that it’s solidified. I like leaving [the relationship] that way. I’m not left with any sort of, ‘Oh, I wish she would have… Oh, I wish they would have…’ It feels right.”

Shameless fans, what did you think of Kev and V’s long-awaited wedding? Hit the comments!