Agent Phoebe Donnegan has been working to take down the Good Girls since last season, and on Sunday’s episode, someone finally took the fall.

A promising new business opportunity for Boland Bubbles turned out to be a sham set up by the Feds, with Dave, Phoebe’s boss, going undercover in hope of sneaking a look at the business’ books. Despite Phoebe’s incessant objections, it wasn’t Beth who hitched a one way ride to prison. Rather, the high-ranking agents only had eyes for Dean, and as Episode 2 came to a close, he became the ladies’ accidental fall guy. But what happened during Beth’s dinner with Fitzpatrick, and who made a surprising drop-by to the Hill household? Let’s recap from the top.

We open with Rio facing police questioning over the discovery of Lucy’s body, but as always, the gangster is cool, calm and collected. He’s armed and ready with a fake alibi, and manages to walk out of the holding room unscathed… for now.

Beth shows Annie and Ruby the earrings their favorite hitman gifted her, and asks them for advice on what to do with the date proposition. “Maybe it’s just dinner?” Beth asks, to which Ruby quips: “…if they’re serving vagina!”

Dean interrupts their chat to tell Beth that Big Kahuna, a large brand of spas, wants to meet with them. He’s all smiles, as he explains what a big opportunity this is for the hot tub store. (Uhh, Dean? It’s a trap!)

Naturally, the Big Kahuna head honcho turns out to be Dave undercover, and he wants to review the company’s books before he makes his “big business decision.” Beth awkwardly tries to stall before Dave lures Dean away with flattering compliments and promises of booze. 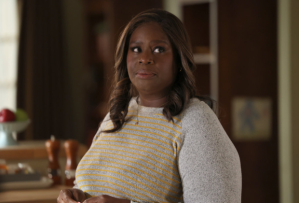 The Hills are surprised when Sara’s donor family shows up for another unexpected visit. Carl and Jenny have decided to move to Detroit, which immediately puts Ruby and Stan on high alert. The couple is concerned the donor family is going to shake them dry, especially since the drop-bys don’t seem to be stopping any time soon. After Stan invites them to dinner again, their guests bring up the topic of money. They want to set up a financial arrangement, but before they can finish, Ruby bites Carl’s head off. “Your life is not our fault. We don’t owe you a thing!” She understandably pops off, only to feel sheepish once the family offers them $87. Their actual intent is to set up a payment plan to pay the Hills back for the car they gifted them. Awkward!

With Beth stalling on the books sitch, Dean grows wary that she may be trying to hide something… especially after she unexpectedly fills their home with new furniture. When Beth brings out the trash, Rio’s waiting outside. He forces her to give up the business’ routing number so he can move around some funds. Always shady, that one.

Meanwhile, Dave and Dean hit a bar, and after copious rounds of shots, Dean secures the account (or so he thinks). But, he reveals that he straight up gave Dave their books. “We’re in the Kahuna family,” he tells Beth, who is all sorts of shook by this news.

At dinner, Fitzpatrick woos Beth with wine and radish expertise (weird flex, but OK), yet Beth is still confused as to why he can’t just get the job done. When Beth’s salmon comes out rare, Fitzpatrick takes it into the restaurant’s kitchen and busts open the cook’s face (because that’s toootally the rational thing to do). Meanwhile, Phoebe is seen digging through the Boland’s trash.

A background check Stan ran on the donor family reveals that not only is their record squeaky clean, but they’re not even the right donors. The car accident that took their daughter’s life happened a day after Sara received her organ transplant. When Stan asks if Ruby is going to call to let them know, she asks, “Haven’t they lost enough?”

Phoebe reveals her trash treasure to Dave: It’s dryer lint mixed with starch, linen and cotton. “She literally launders her money at home in her dryer,” she says. But her findings still aren’t enough for the Feds. In the middle of the night, there’s a stern set of knocks at the Bolands’ door. It’s the Feds. “I’m sorry,” Beth says to Dean, stepping forward to accept her fate. But they aren’t there for Beth. “Mr. Boland, you’re under arrest,” a cop says, putting Dean-o in cuffs.

“You’ve got the wrong person,” Phoebe repeats to Dave, but her comment once again falls on deaf ears.

Surprised Dean went down for the ladies’ operation? Will Fitzpatrick ever finish the hit? Tell us your thoughts in the Comments!