Well, guys, we did it. After five long, emotionally manipulative weeks, the American Idol Season 19 auditions have come to an end — and no one is more tired than Katy Perry’s cow-print suit. (Rest easy, old friend. Your me-moo-ry will live on forever.)

Let’s start with Sunday’s surprise guest stars, which ultimately yielded polar opposite results: First, Season 18 finalist Francisco Martin dropped by to support his brother (and plug his new single), joining him in harmony for a performance of Season 17 runner-up Alejandro Aranda’s “10 Years.” (Yes, synergy!) Unfortunately, Martin took the lead on this one, which left his brother to flounder in a sea of nerves. To add insult to injury, the judges told Kiko that he wasn’t quite as “ready” as Francisco was when he auditioned. Honestly, I blame Ryan Seacrest for jinxing Kiko by asking which brother is the better singer. That’s an Andy Cohen line of questioning right there.

On the flip side, Season 16 finalist Catie Turner also came to support her boyfriend, Zachary D’Onofrio (aka “Sinatra Boy”). Despite losing touch after their whirlwind romance on Idol a few years ago, Turner and D’Onofrio have since been reunited by the gods of fate, and their truly one-of-a-kind chemistry was in full effect during their performance of Harry Styles’ “Falling.” They fed off each other’s energy, constantly pushing each other to be better, and the result was an extremely sweet little duet. Sure, Turner won’t be there to hold her prince’s hand in Hollywood, but I’m pretty sure the judges would have put him through based on his initial performance of The Beatles’ “Golden Slumbers” either way. The only question is: Am I more excited to see how he fares in the competition, or what he wears next?

Read on for this week’s most memorable (successful) auditions:

MADISON WATKINS, 25 | There’s something I just can’t help but love about this Arkan-sassy Angeleno. From the moment she stepped through the door, I wanted the best for her. But because my support was not enough, she also brought her dad along to hear a piano ballad she wrote for him called “Your Little Girl.” Emotional lyrics complimented her soaring vocals, and I loved every second of it. Also, were you even the least bit surprised when Watkins was revealed to be a hair model? That’s one superb mane.

LIV GRACE BLUE, 17 | Perry made Blue’s day by recognizing a little bit of herself in her, and Blue made everyone’s day with a sultry, stripped-down cover of Perry’s “I Kissed a Girl.” There’s something very chill and unassuming about her, and I thoroughly dig it.

AVA AUGUST, 15 | Another Perry fan, this Orange Country singer-songwriter made me feel older than time itself when she recalled attending one of Perry’s concerts at just nine years old. (Deep breaths.) Anyway, their roles were reversed this time around, and Perry relished every bit of August’s private show. I appreciated the sweetness in her voice, while the judges complimented her on sounding like an old soul.

DESHAWN GONCALVES, 19 | A blessed fountain of purity and light, this proud member of the Jackson State University marching band blew the judges away with a soulful performance of “Everything Must Change.” (The only thing I would have changed? More tuba!) “God saw fit to put you in front of us,” Lionel Richie told Goncalves, which was a lovely sentiment… even if everybody knows that God only watches The Voice. 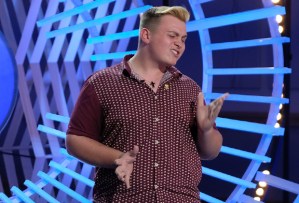 TRYZDIN GRUBBS, 15 | The only one of his siblings who chose anything else over sports (relatable!), this poor guy was severely bullied — both online and at school — simply for sharing his interest in music. The judges weren’t crazy about his first performance, with Luke Bryan expressing his concern over Grubbs’ “lack of confidence,” but he won them over with a more confident delivery of James Arthur’s “Nobody.” Part of me feels like Grubbs is more of an imitator than an original artist, but the other part of me just appreciates his potential and is excited to follow his journey.

ANDREA VALLES, 23 | Didn’t think you’d ever heard someone compared to Gwen Stefani, Madonna and *checks notes* Rita Ora in the same conversation? Well, life’s full of surprises. And Valles was one of the good ones, delivering a bold performance of Fleetwood Mac’s “Landslide.” (Those runs!) I was already sold on the pink-haired powerhouse, but the judges needed a little more convincing, which they got via Valles’ take on Dance Monkey’s “Tones And I.”

BRIANNA COLLICHIO, 15 | After talking about her lifelong struggle with cystic fibrosis, this inspiring performer — who had to reschedule her original audition due to an emergency surgery — brought her story to life through Alessia Cara’s “Scars to Your Beautiful.”

COLIN JAMIESON, 22 | I never would have pegged this guy for a former boy bander, but he indeed opened for the likes of Ke$ha, Big Time Rush and Victoria Justice as part of a group known as Kick It. Allegedly. (My Google search yielded nary a result.) And although his take on Billie Eilish’s “Six Feet Under” was a little breathy for the judges’ taste, there was something very smooth and natural about his voice.

VAHHLEY, 23 | “Your singing is real good, but your fight is incredible,” Bryan told this young single mother, who blessed the judges with a passionate performance of Whitney Houston’s “One Moment in Time.”

WYATT PIKE, 19 | Having a beautiful voice is one thing, but this teen showed that he has a beautiful soul to match, performing a song inspired by his relationship with his sister, whom he supported during her recent mental health issues. Am I crazy for detecting some John Mayer vibes there?

ALTHEA GRACE, 21 | Closing out the final night of auditions was a young mother who didn’t even know that she was pregnant until she was already seven months along. She moved the judges with “Saturday Morning,” an original song about all the little moments we don’t realize we’ll miss until we can’t experience them anymore, a song that draws inspiration from Grace’s baby girl (named Lennon, like the Beatle!), who received a life-saving liver transplant several months ago.

Which of this week’s singers will you be rooting for in Hollywood? Cast your vote below, then drop a comment with more of your thoughts.