Kyliegh Curran can’t spill all the beans about what Friday’s Secrets of Sulphur Springs Season 1 finale (Disney Channel, 8/7c) has in store for fans because she does co-star on a show with secretiveness in the title.

But Curran is willing to give fans a taste in advance of the season closer. “Oh, I am so excited for the finale,” she tells TVLine. “So we saw Harper, Savannah and Griffin together last episode. Well, we’re going to see more from Harper, Savannah and Griffin in the finale, and it’s going to be intense. I’m super excited. I’m a huge Stranger Things fan, and I binged the first season three times. I’m super excited about the parallels and the comparisons, and you’ll definitely feel that in the finale.”

Viewers will also learn more about Harper and her quirky brood on the Disney Channel series, the Miami native says.

“It’s time for healing these families. We’ve spent the last nine episodes healing Griffin’s family and getting to know them, and now we’re onto Harper,” Curran reveals. “We’re getting to know more about her and her family and their backstories. This episode especially touches on that. We find out a lot more about Jess.” 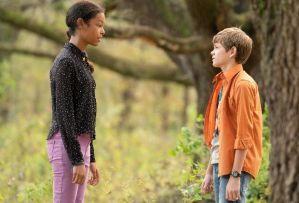 Unlike the kids on Stranger Things, Harper and Griffin (Preston Oliver) get to travel in time and meet the younger versions of their parents and try to correct past mistakes. Griffin and his family also live in the spooky Tremont Hotel in New Orleans, a place where many of those “mistakes” took place over the years. But time travel has its hiccups, and while Harper is close to her mom Jess (Diandra Lyle), she bumps heads with the tween version of her mother, Young Jess (Izabela Rose).

“Harper is very artistic, and I love art and have quite a few sketch books. And she cares a lot about her friends, and I do as well,” Curran says. “But she’s a little bit adventurous for me. If I were Harper, I would probably take a good week or a few days to plan out my time travel so I wouldn’t accidentally prevent my birth, but Harper jumps right in. I was worried at first that Harper would accidentally set off some chain of events where Jess and [Griffin’s dad] Ben do end up marrying, and Harper just slowly fades away.”

Time travel also allows Harper and Griffin to switch up their looks and blend in with the times, which is also a job perk for Curran. “It’s super fun because we’re always playing different eras, so there are different wardrobes, different hairstyles,” she says. “The highlight of playing Harper is definitely her boots and her art. Because all of her boots and artwork tell a story, and you kind of see that as things progress in the series.” 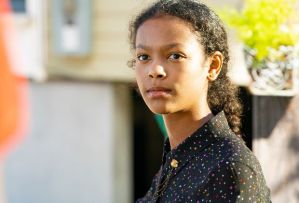 Viewers must be enjoying that sci-fi feeling because Secrets of Sulphur Springs is the No. 1 basic cable show among girls ages 6 to 11, according to the network. This is especially impressive because the series doesn’t underestimate its audience. For instance, when Harper and Griffin traveled back to the Tremont Hotel in the 1960s, Harper had a brush with racism, and Griffin couldn’t relate.

“I was very happy that they gave me the opportunity to bring that up in the series, especially since it’s a very heavy topic, and since this show is directed towards kids, they had to be a little sensitive with the topic,” Curran reveals. “And I think they addressed it very well. Harper knew exactly what would happen as soon as they went into the ’60s. And Griffin didn’t really understand. I don’t think Preston thought about it. I’m not sure. I never asked him. But I did know, and so did Harper. Going into the 1960s, there are going to be quite a few racist bumps along the road for Harper.”

Curran adds that “as soon as I saw that in the script, I was like, ‘Good. We’re touching on that.’ I was most happy that they wrote it in the script that Griffin listened to Harper and didn’t brush her off. He knew he wasn’t going to be able to understand, but this is what it was like back then, and it still happens. I’m 15. This is not at all the first time I’ve dealt with the subject of racism. You don’t always know what to do. So the best thing you can do is try your best to spread awareness, tell people what is going on and listen to people who have had to experience racism. I hope the kids who are six to 11 years old who are watching haven’t experienced it, but it’s also good that we didn’t sugarcoat racism that has happened in the past and still goes on today.”