The challenge on Friday’s episode of RuPaul’s Drag Race may have been inspired by Freaky Friday, but with all those buses the queens threw each other under, it felt more like we were watching Mean Girls.

But first… The eight remaining contestants sat down for a group session with Char Margolis, easily my favorite reality TV medium since Allison DuBois on The Real Housewives of Beverly Hills. And what did she do, you ask? Why, simply the most! In a single session, this woman made peace between Tina Burner and her late father, put Utica Queen in contact with her childhood calf (Clara says “Moo!” by the way), and even exposed Rosé and Denali as each other’s werkroom crushes.

Per Char’s intuition about which queens could learn the most from one another, Ru put together some truly unexpected pairs for the Season 13 makeover challenge. (What, you thought they were going to bring in outsiders again? Not in this pandemic, baby!) So let’s see how well some of these polar opposites managed to embody their partners:

UTICA QUEEN & SYMONE | We might as well start with the best, right? Believe me, I was just as surprised as you to see Utica transform into an “ivory enchantress” on that runway, especially after she told Symone that a look based on the 1987 movie B.A.P.S. “might be too inappropriate.” Fortunately, Utica learned an important lesson about appropriation vs. appreciation (“Don’t worry about the skin, worry about what’s within!”), rocking the main stage and doing her partner proud. It was also a trip to see how fully Symone embraced her inner Utica, serving moves that were “awkward” and “not sexual” but still fun — and if that isn’t Utica in a nutshell. The word “brilliant” was mentioned during Symone’s critique, and I do not disagree. Well done, ladies! 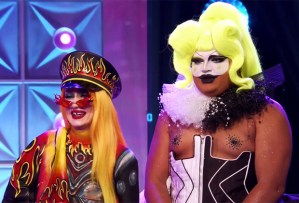 GOTTMIK & KANDY MUSE | Kandy made it clear, both in a confessional and on the main stage, that she and Gottmik had the most work to do, since their vastly different body types prevented them from simply “shopping each other’s racks” like the other pairs. That’s why Kandy became particularly incensed when Denali commented that Gottmik looked more like Tina than Kandy. (In addition to confirming that Tina does not have ownership of the colors red and yellow, Kandy added, “You never see Tina Burner coming down the runway like a ho, looking flawless!” Um, ouch?) With all that said, the judges were impressed by both partners’ transformations, especially the undeniable Gottmik “branding” all over Kandy. (Side note: Has there always been this much talking during runways? Some of those girls were serving dialogue during their walks.) 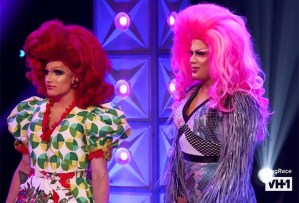 TINA & ROSE | These New York queens, who didn’t know each other very well before filming this season, made for a perfectly serviceable pair. Rosé nailed Tina’s mannerisms, even if her exaggerated movements made it look like she was starring in Tina Burner: The Musical, and Tina… you know… learned to embrace the color pink. The judges weren’t overly impressed by this duo, but the bottom two were clear from the jump. 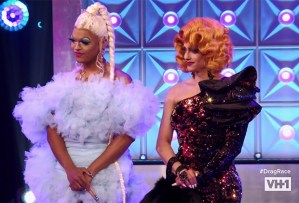 DENALI & OLIVIA LUX | With that long ponytail and light-blue tulle, I actually thought Olivia was a dead ringer for Denali. Unfortunately, the reverse was not also true. As Michelle Visage put it, Denali “could have been anybody” walking down that runway. Where was the big hair? Where was the bubbly personality? As Denali would come to say in her confessional: “I’m in the bottom for errors my partner has made. That sucks.” I swear, if any more bus-throwing occurred this week, we’d need a traffic light installed in the werkroom.

As if the episode hadn’t been shady enough, Ru then asked the queens which of their competitors should be sent home this week. Rosé, Tina, Symone, Utica and Gottmik all picked Olivia, while Kandy chose to target both Olivia and Denali because of the aforementioned comments about Gottmik’s look. (Hell hath no fury like a drag queen scorned!) As for Olivia, she was the only one to single out Utica, which she said was “based on the entire competition.”

But the lipstick writing was already on the wall. After being announced as this week’s bottom two, Olivia and Denali took center stage for a ludicrous performance of Mary Mary’s “Shackles (Praise You).” I call it ludicrous not for the actual performances, but because of the song choice, which even Symone referred to as “some comedy f–ing gold.” (As someone who once watched this song performed at a church in my younger days, I have to agree.)

Despite her reputation as something of a lip sync assassin, Denali didn’t contribute much to this battle, mostly because her Olivia outfit wasn’t exactly built for kicks. She was able to do more once she hiked up her dress, but Olivia already had it in the bag by then. And just like that, Denali was sent skating away.

What’s your take on this week’s challenge? Elimination? Group psychic therapy lesson? Vote for the queen you’d have sent packing below, then drop a comment with more of your thoughts.