The following post contains spoilers for WandaVision, up to and including the season finale.

For all the questions we got answered in WandaVision‘s season finale — and there were many! — other aspects of Episode 9 left us feeling like a suddenly-self-aware White Vision: We request elaboration.

In the Disney+ series’ final episode, we learned, among other things, the true identity of Evan Peters’ “Fietro,” Agatha Harkness’ and Tyler Hayward’s respective endgames, and whether a familiar face from the Marvel Cinematic Universe would pop up for the last installment. (Answer: Nope!)

But even after the Hex came down and Doctor Strange in the Multiverse of Madness was teed up in a post-credits scene, there was still much to mull about the show’s conclusion — and we went straight to the source for insight. 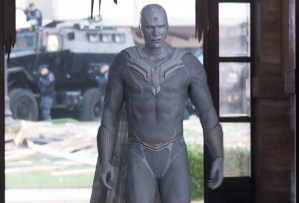 IS WHITE VISION NOW THE REAL VISION? AND WHY DIDN’T HE GO TO WANDA? | After the two Visions’ philosophy discussion, Hex Vision restored White Vision’s original data, allowing White Vision to remember his relationship with Wanda and the Mind Stone’s destruction. “I am Vision,” White Vision then stated, before flying off… somewhere… and disappearing for the rest of the finale. But is he actually the original Vision once again, now that his data has been retrieved?

“I’m sure there will be plentiful opportunities in the future to answer that completely,” Livanos hints. “We found it very compelling that he does get the data back. Whether or not that makes him a full and complete Vision is left unanswered, but it’s probably safe to say that he still has some growing to do. We’ll see what the future holds.” (And because White Vision’s data retrieval “doesn’t quite make him the same guy” that he once was, Livanos says that may explain why he didn’t immediately fly over to Wanda and help her take down Agatha. “We’ll just have to see where he pops up next and what his journey is,” she shares.)

WHY DIDN’T DOCTOR STRANGE MAKE AN APPEARANCE? | Amid the rampant fan speculation about which MCU or X-Men characters might make a cameo, Benedict Cumberbatch’s time-bending character always made the most sense; the Sorcerer Supreme was even name-dropped in WandaVision‘s finale, making his eventual absence from even those post-credits scenes a bit of a head-scratcher.

“There were a lot of conversations. We had conversations with the team on Strange 2, and this is how it all happened,” Schaeffer tells us, when asked if Cumberbatch’s appearance was the initial plan that simply couldn’t come together. She’s even more tight-lipped about whether the WandaVision team reached out to Cumberbatch’s camp to make it happen, telling us, “I can’t talk about that kind of thing.”

WAS DARCY MEANT TO HAVE A BIGGER FINALE ROLE? | Kat Dennings’ quippy astrophysicist delivered exactly one line in Episode 9 — “Have fun in prison!” she told Hayward after T-boning his vehicle — then was conspicuously missing from a mid-credits scene that seemingly should have included her. To Livanos’ knowledge, “I don’t think [Dennings’ absence] had to do with anything COVID-related,” even though WandaVision‘s final days of production did happen mid-pandemic. “We love Darcy as this elusive, wacky character, and I find it particularly delightful that Darcy could pop up anywhere in the universe.”

WHAT’S UP WITH MONICA AND CAPTAIN MARVEL? | Per Livanos, the apparent friction between Monica and Carol Danvers — which was strongly hinted at during Episode 4 — wasn’t necessarily meant to be resolved during WandaVision‘s run. With Monica next popping up in Captain Marvel 2, Livanos confirms, “We do hint at the notion that there’s a little bit of tension there for her and Captain Marvel in the future, but we’re excited to explore that at another time.” 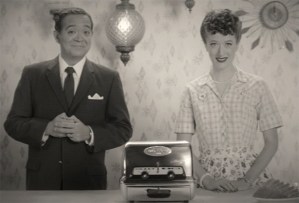 WHAT HAPPENED TO THOSE COMMERCIAL ACTORS? | Wanda’s commitment to sitcom life extended all the way to WandaVision‘s commercials, which Shakman confirms were Wanda’s creation along with the rest of the broadcast. “Wanda gave roles to almost everyone in Westview,” he clarifies. “Those two actors, or townspeople, that we picked to be in the commercials were meant to be the same as everything else — that they were iterating through time, in the same way that Wanda’s car is a red Buick that iterates through time. Wanda has cast these two to be her commercial actors, and they appear in every single episode, and they are part of the broadcast.”

And though the commercials were partially for viewers’ entertainment (and a fun Easter egg hunt for MCU fans), “it was also meant to be a repository for Wanda’s unconscious,” Shakman tells us. “She’s putting something into these commercials that are clues to some of the bigger thematics in the show.”

AND THE BEEKEEPER? | With the commercial stars presumably safe now that Westview has been de-Hexed, what are we to make of that S.W.O.R.D. operative who became a beekeeper upon piercing the barrier? Wanda “rewound” his ominous appearance in Episode 2, and he was never mentioned or seen again. Is he trapped in some kind of Westview purgatory?

“It was so fantastic to see the world’s response to the beekeeper,” Livanos admits with a laugh. “You know, at the end of the show, Wanda takes down her Hex in order to save the people of Westview from the trauma she was projecting. So hopefully he’s OK. We all hope for the best for him.”