I scream, you scream, we all scream for… hot gossip about Hope and Landon’s relationship, apparently.

At least that was the Necromancer’s first question when Landon waltzed into his ice cream parlor from hell on Thursday’s Legacies. The frozen food establishment was apparently his personal prison, courtesy of Malivore, complete with shackles that wouldn’t break until he did the one thing he’d “never” do: humiliate himself in front of his customers. Cue the most disturbing performance of “If You’re Happy And You Know It” ever recorded.

The Necromancer proposed an “old-fashioned team up,” which lasted for all of five minutes before he and Landon were quite literally at each other’s throats. That is, until Landon did the one thing he would never do, pummeling the crap out of the Necromancer with his bare hands. He even managed to escape the mysterious dark realm, winding up stuck in a fiery new prison world. (I’ll admit, I’ve never been an expert on these prison worlds — and that dates back to The Vampire Diaries — but is anyone else especially confused about what’s going on here? I’m not even going to pretend that I know what’s really happening with Landon. I’m just going to keep watching and silently nodding in the hopes of looking smarter…er.)

And things weren’t any less of a nightmare back at the Salvatore School. Most of the students have apparently transferred to other supernatural institutions — the whole black magic/Necromancer thing was the last straw for their already nervous parents — leaving a major void to fill in the student body. So it was up to Hope and her few remaining classmates to win over the few prospective students still willing to enroll in one of the deadliest schools in the country. (Side note: Do we think that this sudden downsizing was merely a convenient way for the show to cut down on bodies while filming during a pandemic? It makes sense!)

Unfortunately, no one was in the mood to fake smile for a bunch of strangers — least of all Hope, who remained fully haunted by the memory of her relationship with Landon. (But don’t take our word for it, just ask any of the prospective students sent flying by Hope’s uncontrollable emotional energy blasts!) Plan B was more of a divide-and-conquer strategy, but that proved fairly disastrous, especially when Alaric found himself alone with a young vampire who only showed up to get revenge on the hunter who killed his family. I’ll give you one guess who that hunter turned out to be.

Hope formed a surprisingly strong bond with one of the prospective students, Cleo, who offered some insight into her erratic behavior. “I know I’m supposed to start moving forward, but I don’t know how,” Hope admitted, to which Cleo replied, “In my experience, you’ve already done the hardest part. You’ve said it out loud.” The two had an honest chat about the real dangers of life at the Salvatore School, which Cleo found refreshing enough to enroll mid-semester. The final slot went to another girl who turned out to be Wade’s online Dungeons & Dragons buddy. Small world! 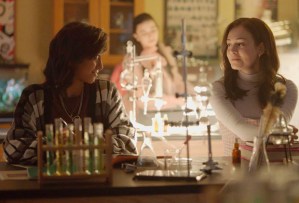 On a much lighter note, Josie’s first day at Mystic Falls High School — where Dorian is now the principal, because apparently everybody’s getting a turn at that gig — went off without any supernatural drama. Just, you know, regular high school drama. Fortunately, Josie’s new crush Finch and new bestie Ethan were there to lend a sympathetic ear, helping her to feel less guilty about being the person who got out of a bad situation. (Sorry, Lizzie!)

We should also probably talk about MG, who is finally standing up for himself. [Insert clapping emoji.] That means no more pretending to like D&D (“Just because I like comic boks, it doesn’t mean I have no dignity!”), no more holding onto Alyssa’s stuff, and no more letting Lizzie use him to make herself feel better. As he explained to her, “If you keep searching for someone to fill this void, you end up putting your happiness in other people’s hands — but our happiness is our own job.” Damn, can somebody get that into a fortune cookie please?