There is no denying that grown-ish‘s Zoey (played by Yara Shahidi) and Aaron (Trevor Jackson) have a complicated relationship.

The minute one moves on with someone else, the other seems to dip back in and tear things up. And as fans saw on this Thursday’s installment, “All in Love Is Fair,” it is Zoey’s turn to take on the role of Tasmanian Devil. After previously telling Aaron she’s in love with him and kissing him, the two got really intimate and consummated their relationship as an episode opener. OK, then. That’s an attention grabber. 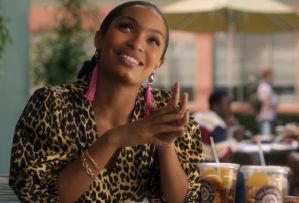 But reality set in — doesn’t it always? — and after all those loving and lusty feelings ended, a text from Aaron’s girlfriend Rochelle (Raigan Harris) shook the two homie lover friends out of their post-coital bliss. That’s when Aaron jumped up and said he had to go. He knew what he had to do, he had to get back to Rochelle. But Zoey, in contrast, was all too comfortable hanging on to her denial, even going so far as to declare to her girl Ana (Francia Raisa) that Aaron was going to kick Rochelle to the curb to be with her.

That’s not what happened, of course, but a love-drunk Zoey didn’t realize this until she saw Aaron and Rochelle walking around campus hand in hand, as if what happened between him and Zoey never happened. Because, sadly for Rochelle, she doesn’t know what happened. That’s when Ana’s warning to Zoey that she was the #sidepiece truly kicked in and Zoey realized she had become just that — a piece on the side.

Aaron and Zoey met up later and argued about her status with him. He said she wasn’t a side piece, and she insisted she was. Attempting to offer clarity, Aaron instead described Zoey as “the girl who floats in and out of my life whenever she wants, and just kind of screws with my head.” Hurt by his frankness, Zoey curtly corrected Aaron and told him that she actually quit her styling job with Joey Badass and is going to re-enroll in school. Yikes. 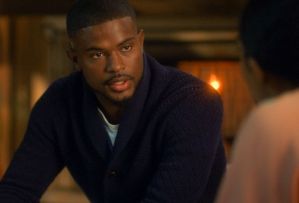 The two parted ways, and the next morning Zoey received a DM from Rochelle saying she wanted to “talk about Aaron.” A freaked-out Zoey ran to friends Ana, Jazz (Chloe Bailey) and Sky (Halle Bailey) for advice, and all three basically told her to ready herself for a beatdown from Rochelle. Afraid her friends were right, Zoey showed up to meet Rochelle dressed for a fight right down to a pair of fresh Timberlands to ground herself while taking a punch. But when Zoey got there, Rochelle was wearing a sundress and sandals… and offering apologies. What?!

Rochelle said she was sorry she told Zoey to leave Aaron alone and she hopes that all three of them can be friends. And it was in that moment that a very guilty Zoey realized that in the game of love, Rochelle had played the right way and that she had cheated. What is all of this going to mean moving forward for Aaron and Rochelle and Aaron and Zoey? Something tells us all the juicy details will be revealed in next week’s Season 3.5 finale!