A bathroom floor at the mall probably isn’t the most ideal spot for a teenager to give birth.

HBO Max’s latest series, Generation, debuted Thursday with its first three episodes, following a diverse group of high school students whose exploration of sexuality is often at odds with their conservative community and families. In the premiere’s very first scene, two mallrats are absolutely losing it as Delilah (Speechless‘ Lukita Maxwell) screams in pain while yelling to her friend Naomi (Kevin (Probably) Saves the World‘s Chloe East) to Google “how to give birth.” Is the girl actually pregnant, though? Before we can properly diagnose her, we cut to three months earlier to meet the rest of show’s rambunctious zoomers. Read on to find out what else goes down in Episode 1.

A boy named Chester (The Get Down‘s Justice Smith) struts his way into school in a crop-top and teeny sunglasses, an ensemble that snags him his third dress-code violation. He’s told he needs a guidance counselor to sign off on his infractions, which leads him to meet the school’s newest employee, Sam (Misfits‘ Nathan Stewart-Jarrett). From their conversation (which is loaded with chemistry, by the way), we learn that Chester is a star water polo player with a 4.1 GPA and a low tolerance for “giving a f–k.” Chester also tells Sam that he’s “like, a lot,” which just minutes in, is pretty undeniable. Their chat is flirtatious, at least on Chester’s end, which is only confirmed later when he checks out Sam stretching at the track.

Chester is a popular student, crushing it at practice and confidently owning the school’s hallways. We see him email a selfie to Sam with the subject: “This is what loneliness looks like.”

Riley (Betty‘s Chase Sui Wonders) texts him saying she and her friend Nathan (Divorce‘s Uly Schlesinger) want to meet him, so Chester makes a cameo at her party. Before he can find them, Sam calls to see if he’s OK. He says he needs to meet with Chester on Monday because he’s worried the kid wants to hurt himself. Is Chester just being Chester, or is there an inkling of truth behind that email? Or maybe Chester’s just trying to secure a little more of Sam’s time.

Chester finally finds Nathan, who claims he’s having the worst night of his life. Chester asks if he’s been crying. 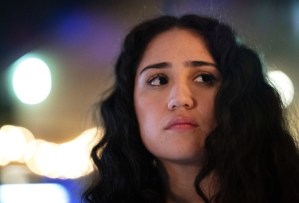 We rewind a bit and cut to Greta (Redress‘ Haley Sanchez), as she watches Chester walk by at school. Greta seems to be crushing on Riley, who asks her if she’s coming to the party.

Greta lives with her aunt, and when the subject of her mom comes up, the girl immediately cops a ‘tude and does not want to talk about it. At the party, Riley finds Greta, who almost opens up about her situation, until Chester interrupts their conversation.

Next up is Nathan, who we meet while he pleasures himself in bed. His mom, Megan (Raising Hope‘s Martha Plimpton), is an uber-conservative stickler for scheduling, so much so that she and her husband schedule sex dates with a purple dot on their extremely extravagant wall calendar. Nathan’s sister is Naomi, who’s caught up in the drama of dating Jack (Ballers‘ Connor Chavez).

While sitting in church, Nathan receives a very sacrilegious pic on Snapchat; Naomi sees and takes a picture of it. Nathan claims it was a joke and that he isn’t gay, but Naomi is mad he’s hiding secrets. Apparently, Nathan isn’t out of the closet yet and is clearly struggling with his sexuality.

Jumping back to the party, Nathan starts slamming booze and asks Jack if they can talk for a minute. They head into a bedroom and immediately start making out. The penis in question was Jack’s, but Nathan assures him Naomi doesn’t know it was his. Nate attempts to go down on him, but before anything can actually happen, Jack explodes in his eye — which is why Chester thought Nathan was crying.

Riley asks Nathan if he told Naomi he was bisexual. (Of course, he didn’t.) He feels guilty for hooking up with Jack. The episode ends with Riley jumping into her pool fully clothed. Might she have feelings for her buddy Nathan? She sinks to the bottom of the deep end, clutching her knees, leaving us to wonder.

What did you think of Generation‘s premiere? Grade it below, then hit the Comments!