Clarice Starling is no stranger to danger, but after Thursday’s episode, she might think twice the next time she decides to fly solo. (Eh, who are we kidding?)

After a search for Marilyn Felker (a.k.a., the leader of the clinical trial that the murdered women participated in) led Clarice to sister Luanne Felker’s medical facility, Starling found herself pumped full of psychotic drugs and chained to a hospital bed by none other than Marilyn, herself. Not being able to tell reality from psychosis, Starling’s trauma and PTSD ran rampant in her brain as she struggled to figure out how to escape the newfound horror show she found herself in. And while she wasn’t actually trapped in Buffalo Bill’s pit of despair, she might as well have been, seeing as she was once again in a fight for her life at the hand of a mad(wo)man.

Below, TVLine speaks with series lead Rebecca Breeds about Clarice’s traumatic past, the torture she endured during her imprisonment and how the Aussie actress learned to speak that tricky Appalachian dialect.

TVLINE | Clarice goes through absolute hell in Episode 5. Even though you’re mostly bed-ridden throughout, was this episode difficult to shoot?
REBECCA BREEDS | This episode nearly killed me. [Laughs] It was so intense because even the times when I’m just lying in bed, the psychological trauma she’s going through is extreme. And then there’s all the pulling myself around on the floor in a drug stupor, paralyzed from the waist down… it was a very intense episode physically, emotionally, everything. It took so much of me and it was just so rewarding at the end of the day. You start the day off with these pages going, “How the hell are we going to do this? How am I going to act that and do that truthfully?” So much of it was stuff I’d never experienced. Line by line, moment by moment, I just threw myself into it with complete abandon. Every single part of this episode to me was like jumping off a cliff, like “I don’t know how to do this, but let’s go!”

As an actress, I went to places I couldn’t have conjured with my rational intellect. It was very much an instinctive experience and at the end of every day, I went home completely spent but so satisfied, like “Whoa, I did that today and I think it came out really good, and I’m really proud of that.” It was a huge learning experience for me. 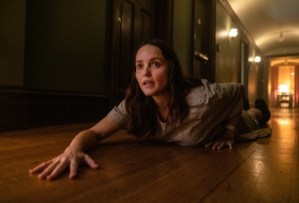 TVLINE | We see a lot of Clarice’s trauma manifest itself through the dreams and visions she has. I’m curious: Is it her trauma that drives her or is she simply running away from it?
BREEDS | Such a good question! It’s a really great thing to ask because we’re at a point in the show where she doesn’t know yet. I think that’s one of the reasons why she avoids dealing with her trauma because what if it is the thing that’s driving her? What if it is the thing that makes her good at her job? It’s like a really good musician. Once you find the love of your life and there’s no drama anymore, are you still going to be able to write a good song? If you feel like greatest hits are all break-up songs, what happens?

I think that’s part of her resistance to looking this stuff in the face. Will she completely fall apart? Maybe. Will she lose some of her drive or her efficacy as an agent? Is she going to be a better agent than ever? They’re all very real things she doesn’t know the answer to, and there could be some sacrifice there once she heals and deals with the trauma and puts it aside. What’s it going to take for her to finally say that maybe my well-being is more important than my job? I think we’re at a point where we’re pushing to a boiling point, where she might start to think that, but she’s not there yet.

TVLINE | Why is it that Clarice always seems to work by herself, despite all of the danger she gets herself into? What is it about her past or her makeup that makes her a bit of a loner?
BREEDS | I think she’s a martyr, for sure. She would rather put herself in danger than endanger others — because the whole point is to rescue people, to silence the lambs, not to put more people in harm’s way — and I don’t think she has a high self-value. She’s like, “Well, if I die, I die… I don’t want to put Ardelia or Esquivel in danger,” or “This could be nothing, I’m just following a hunch.” I don’t think she necessarily anticipates things to go as dark as they do. A lot of the times she’s just using her initiative and chasing a lead. I do that in my life often. I’m like, “Hey, I’ll just do it and show them how clever I am!” [Laughs]

[Clarice is thinking], “There are important stakes here, we have to save these people, more people could be getting killed, let’s just get on with it!” I think on an even deeper level, subconsciously, her dad worked alone as a nightwatchman. He got out there and did the job. He’s her hero and she wants to emulate him. He looked darkness in the face every night and he got on with his job, and she likes to think that she can do the same.

TVLINE | I really liked the final scene in this episode between Clarice and Ardelia. Are the two friends going to be able to patch things up?
BREEDS | I think beyond patching it up, they’re perhaps in a state of evolution. I think they’re going to have real chats… it’s real talk time! They’re going on this journey together and I think with their sense of family and friendship, they are committed to having the hard talks and eating the humble pie. They’re committed to learning and growing together, and when you do that your love only grows deeper. We get to witness that evolution, that journey, which is nice, but hard. It hurts, but it’s for the greater good, I think.

TVLINE | Lastly, you absolutely nail the West Virginian accent. How difficult was it to get that down?
BREEDS | Actually, the broad strokes of it came so quickly. I listened to a couple Appalachian accents on YouTube, and then I tried them and they just sat so well in my mouth, I don’t know why. There were a few exercises like “I might fly my kite” and “I thought I caught that dog,” and a couple of mouth positions. It happened in a couple of hours. From there, it was just a matter of gentle finessing, so I worked with a coach and he helped me with pronunciations and bits and pieces. Then, I just applied it to the work, and it really brought the character home for me. Getting the accent was a game changer.