Six months after South Park explored the origins of the coronavirus (we wish we could forget what Randy Marsh and Mickey Mouse did in that back alley!), the series returned to Comedy Central on Wednesday with an equally tasteful “vaccination special.”

The hour-long marathon of madness began like any normal episode, with Cartman pulling a period-related prank on the gang’s = teacher in an attempt to lift his friends’ collective spirit and ease the strain this past year has put on their “bro-ship.” An extremely not-amused Ms. Nelson quit her job on the spot, lamenting that was literally risking her life by showing up to teach these ungrateful little demons.

This unexpected vacancy in the faculty at South Park Elementary School ushered in the long-awaited return of Mr. Garrison, fresh off his “controversial” sabbatical as POTUS. And because he previously identified as “president,” Mr. Garrison now came equipped with his own Secret Service detail. Ladies and gentlemen, say hello to Mr. Service. Just like a Winnie the Pooh, he’s business on the top, party on the bottom. 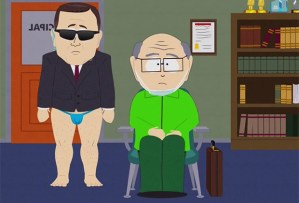 Unfortunately — and for the life of us, we can’t imagine why — Mr. Garrison found himself just as unwelcome by his students as by his fellow South Park residents. Except, of course, for lingering supporters like Bob White. (“All of us Whites were really on your side!”) Bob and his fellow QAnon conspiracists even bent over backwards to decipher what they believed was a coded message from the former president (“Blow s–t out your d–k hole!”), ultimately forming an “educational” group known as… Tutor-non. (“The elite want to f–k with our kids? We’ll f–k theirs!”)

Thus began the most misguided educational experiment in South Park history — and that’s saying a lot. From Hollywood’s insatiable thirst for adrenochrome to the truth behind Jeffrey Epstein’s alleged suicide, Tutor-non’s curriculum was exactly what you would expect it to be. (“Do you know what pedophilia is?” one tutor asked. “Here, let me show you.”)

Meanwhile, the boys attempted to set things right by getting Ms. Nelson back at school. And because vaccinating the teachers was the only way to ensure that, the boys enlisted a kind old lady’s assistance breaking into the most elusive club in town: Walgreens. In true South Park fashion, of course, the boys’ plan was sidelined when everyone in town started hitting them up for vaccines — either by guilting them (“Your mom and I aren’t spring chickens,” Gerald reminded Stan), or by offering to pay. 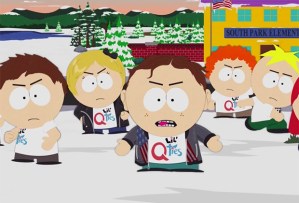 Despite nearly giving into temptation — Stan literally caught Kyle trying to replace some of the vaccines with Cactus Cooler — the boys eventually brought the vaccines to South Park Elementary, only to encounter yet another obstacle: an angry mob of Li’l Q-ties, led by a fully radicalized Scott Malkinson.

Elsewhere, Mr. Garrison turned to the Whites for answers, which (shocker!) only led him further down the rabbit hole. Within minutes, he became fully convinced that the adrenachrome-chugging “elites” were trying to turn the world against him, and the only solution was to stop the teachers from getting vaccinated. What’s more, he ended up striking a deal with the invisible elites to get his old life back — and he knew he got his wish when Mr. Service magically turned into Mr. Hat.

The elites further bathed South Park in benevolent blessings by sending an Air Israel plane to deliver enough vaccinations for everyone in town. “I think I owe you all a big apology,” Mr. Garrison told everyone. “I came here expecting things to go back to normal, but we’ve all been through the proverbial butt hole of hardships lately. I thought we could all just magically be friends again, but relationships are very fragile things. And in times of crisis, when we need each other most, it’s sometimes when we grow furthest apart. But through it all, Mr. White here has taught me a very important lesson: Make sure you’re on the side of the people with the most power.” 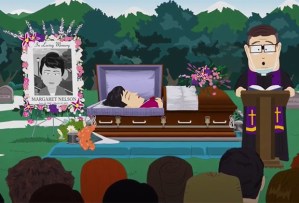 The people of South Park were overjoyed to finally be vaccinated, but not everyone got the happy ending they deserved. (R.I.P., Ms. Nelson!) In fact, the special also ended on a pretty low note for the boys, who agreed to formally dissolve their “bro-ship” and share custody of Kenny on alternating weekends.

Your thoughts on the South Park vaccination special? Grade it below, then drop a comment with your full review.