Good Trouble‘s Callie and Mariana are getting a check-in from their mamas in this Wednesday’s episode (Freeform, 10/9c), which finds the Foster and Hunter clans uniting for a goodbye bash.

With Brandon and Eliza headed to Amsterdam, her parents throw the couple a Dutch-themed party, complete with costumes and a dance performance by both families! During the eventful shindig, Lena and Stef also learn of some surprising choices that their kids have made. But what about Stef’s decision in the Good Trouble holiday special to go to Venezuela as part of Amnesty International?

“We are still talking about that because the date is arriving soon that she’s going to be leaving,” Sherri Saum, who plays Stef’s wife Lena, previews. The move is “one of the points of tension” for the couple, because “Lena wants to be supportive, obviously, and loves her wife and is excited for her to have a new chapter, but it’s scary. They’ve never spent that kind of time apart, that kind of space apart, and that’s still very much in the forefront in this episode.”

Below, Saum talks about slipping back into her Fosters role, her easy chemistry with co-star Teri Polo and the “extra awkward” tension between the Fosters and their in-laws in this week’s reunion.

TVLINE | Most actors, when their series ends, they don’t get to play that role anymore. But that’s not the case here. So when you get those calls from the producers like, “Hey, we want to have you back for this special episode,” what’s your reaction?
First, it’s usually cartwheels, followed by a phone call to Teri [Polo]. It’s really nice that they feel that the mamas are integral to the continuing story of the girls in their lives, and it’s only natural in the sense that these girls didn’t just come out of nowhere. They have a huge long history that the fan base maybe are aware of. So I like that it makes sense, and it’s so much fun to do. It’s like a win-win all the way around. 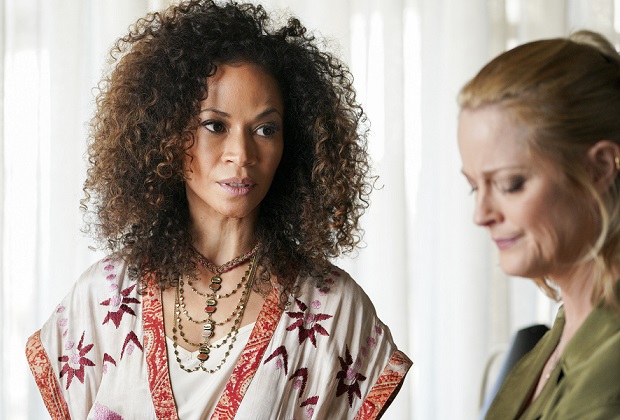 TVLINE | Lena and Stef have such great chemistry. Is it just there the instant that you and Teri get back on set?
Yeah, it’s seamless. We have a language beyond what’s written on the page. We have a language and a rhythm and a music that we each understand, instantly. It’s so refreshing and exciting to be able to tap into that again. I miss her so much. I miss the cast so much.

TVLINE | Do you keep tabs on the show when you’re not on it, like, “Oh, I gotta check on my TV kids. What are they up to?”
Yeah, I’m a little afraid. Part of me is extremely possessive of these children that we faux raised. [Laughs] I’m not ready to know what’s happening. It’s probably like a real parent, when they have their kids go off into the world, and part of them really wants to know everything, and part of them really absolutely does not want to know. Because I do feel possessive of them and these big girl decisions that they’re making, and it’s a little scary. But I do keep up on it. I do drop in and spy a little bit to see what’s been going on. It’s also kind of exciting to go in a little blind, because that’s what happens in real parent-kid relationships. Your parents come to town, and you tidy that closet and you kind of put on your best face.

TVLINE | This coming Fosters reunion episode is a really fun one. What can you preview for the fans in terms of the family dynamics and the shenanigans that are in store?
Oh, my gosh. It’s interesting, because this time around, there are surprises, for sure. But I’m actually very proud of how well Stef and Lena are weathering the roller coaster that is the decisions their children make on their own. Even though we’re extremely affected by them and extremely involved in the outcome of their decisions, it also feels like a little bit of letting go, a little less heart attack-inducing stress from these decisions. I felt like, at least this time around, that we were just kind of cutting the cord a little bit with the decisions that we’re watching our kids make and not fully having a full-body panic attack, as we might have done prior. 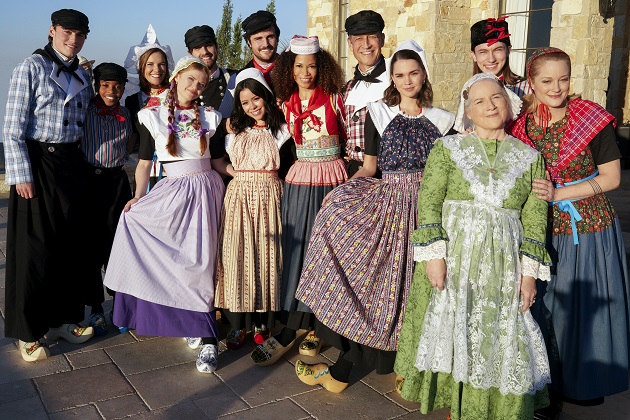 TVLINE | In addition to all the Fosters being in this episode, we also have this gigantic, extended in-law family. It’s a lot of personalities that you’re putting into one room. Can you talk about the dynamics and the tension and the humor that we’re going to be seeing?
It’s really difficult, because we met the in-laws on different turfs, in different ways, through the years. But this time, we’re kind of on their turf. A lot of the hot-button issues that crop up, I feel like it’s a little extra stressful because we’re not in our home court, and we’re also in this very disorienting get-up that we are kind of gently forced into. [Laughs] So it’s a little extra awkward, which makes it all the more fun.

TVLINE | Stef is a little more obvious with her distaste of her in-laws.
That’s a nice way to put it!

TVLINE | Do you feel like Lena has to play the mediator role in this episode?
Oh, absolutely. That’s the dynamic, no matter what. That’s the dynamic in real life. I’m always like, “Let’s not jump off the cliff, at least not in front of the people.” I’m always kind of reeling that in, while secretly at the same time loving her badassery and her willingness to just say what everyone’s thinking. So it’s a nice little tightrope that Lena continues to walk. 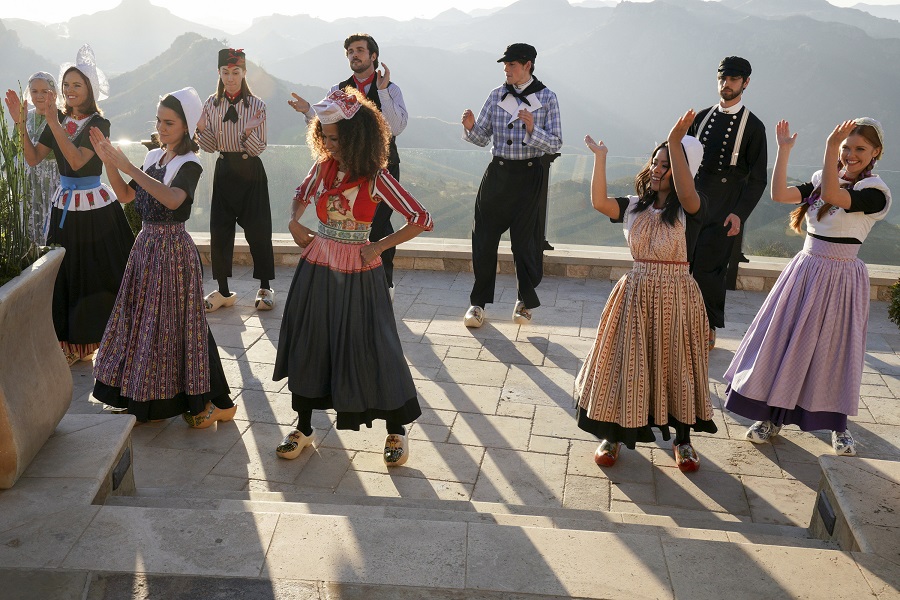 TVLINE | What was your reaction when you saw those outfits and found out you’re going to have to do this whole dance?
Oh, my gosh, I was excited, because as an actor, I’m always so, so thrilled when I get to learn a new skill, and I’m basically being paid to learn it. I’ve always wanted to learn, whether it’s horseback riding or those kind of things, and a lot of times, you get those kind of opportunities as an actor. So this was just another chance to learn something really oddball and fun that you might not have thought of before, and I had a ton of fun. The only part I’m lamenting was the corset, because it did require me to breathe about three breaths every hour. So that was a little restricting in the Malibu heat. That was not fun, and I needed to be horizontal as much as possible when we weren’t filming. So that was a little difficult, but you suffer for your art.