The FBI: Most Wanted crew dug deep this week to catch a pedophile on the loose — all while initiating a new team member.

It all begins with a mother and her son as they go over a school project about the weather. Things take a dark turn when a man named Samuel shows up and kills the mom in cold blood, taking the boy — whose name is Caleb — with him.

Meanwhile, Jess visits the stables to apologize to Sarah (Yellowstone’s Jen Landon) for overstepping and asking her out. But Sarah wasn’t so much miffed as she was caught off guard by his request since she just got out of a serious relationship. Now prepared to answer the question again, she agrees to go out on a date with him. It’s the episode’s only moment of levity, given the sensitive nature of the squad’s latest case.

Enter Special Agent Ivan Ortiz (SMILF‘s Miguel Gomez), who’s just coming in from the counterterrorism unit in Washington, D.C. He’s earnest in introducing himself to the team and makes the mistake of referring to LaCroix as “Jesse,” which Ken is quick to correct (“It’s Jess or boss”). But there’s no time for niceties because they’ve got a missing boy, and the clock is ticking.

Intel leads Jess and Cheryl to Samuel’s house, where they learn that he has a strict Christian upbringing and was often locked in a closet. He was previously arrested 11 years ago when Daniel, another 8-year-old boy, went missing and presumably drowned. The police officer who worked this previous case firmly believes Samuel is a pedophile, and a visit to Daniel’s parents confirms it (the mother caught him spooning their young son and fired him a week before he went missing). 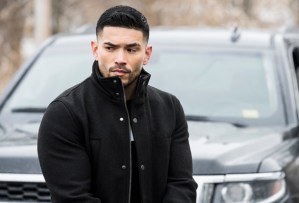 Ivan and Cheryl track down Samuel’s boss, who believes that Samuel is a standup guy. An upset Ivan vents his frustration to Cheryl, who asks him to clarify a rumor going around about him. Word on the street is that Ivan didn’t cuff a suspect tight enough and that person got away, costing the department $20K in overtime manual labor to catch him. Ivan confirms the truth, noting that the incident taught him to pay attention to the little things.

As we’ll come to learn, attention to detail is crucial in solving this case. The team figures out that after purchasing shovels and air tanks, Samuel is probably going to bury Caleb alive. Surveillance footage reveals that he hasn’t been working alone. The task force tracks down his partner in crime and forces him to set up a meeting with Samuel in a parking garage. Realizing he’d been caught, Samuel leaps to his death — taking the squad’s best lead to Caleb with him.

But all is not lost. Jess picks up on Samuel’s phrasing (“You’ll never find him”) which suggests Caleb is still alive and they can still save him. They track the pings on Samuel’s cell to a house close to where Daniel went missing a decade before and find a teenager. It’s Daniel, who’s been brainwashed into believing his name is “Laz” and that Samuel is his father. Jess gets through to Daniel by reminding him of his mother and convinces the scared adolescent to give up Caleb’s location. The gang finds the burial spot and, after realizing the oxygen tank is empty, frantically dig to get Caleb out. Then, Ivan jumps into action, performing CPR to revive the young boy. He succeeds and Jess bids him a job well done, a gratifying end to his first week on the job.

At the hospital, Cheryl follows up with Ivan on the story of the loose handcuffs and reveals that she knows he covered for his partner. It’s a moment of mutual understanding as Ivan confirms he took the fall for his partner, who was retiring soon.

The hour ends on an emotional note with Daniel finally reuniting with his parents while Ken and Jess look on.

What did you all think of this episode? What do you make of the task force’s newest recruit? Let us know your thoughts in the comments!