Close friendships are hard to find. Perhaps that’s why the established bond between besties Delilah (How to Get Away With Murder‘s Maahra Hill) and Tamara (Girlfriends‘ Jill Marie Jones) feels so believable in the Season 1 premiere of OWN’s new legal drama Delilah.

When Delilah’s ex-husband Gordon (Lyriq Bent) created drama and confusion at Maia’s violin recital, it was Tamara who ran interference so that the two wouldn’t argue in front of their kids. And all of those lunches and after-work dinners together really helped keep both attorneys grounded as they navigated the stresses of their day-to-day lives and careers. 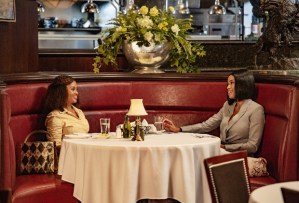 But as viewers learned in Tuesday’s series opener, their close friendship will be put to the test in future episodes as Delilah takes on Leah’s (In the Dark‘s Saycon Sengbloh) case against military supplier Osborne Tactical and Tamara defends them in court. After all, if Tamara takes the case and wins, she could make partner. Because the stakes are so high for her, Tamara even tries to convince Delilah to kick Leah, their old college chum, to the curb to avoid any possible personal or professional conflicts.

But Delilah is too much of a social justice crusader to walk away from a good fight against a bully. Not to mention the fact that Osborne Tactical is shady AF and possibly murdered Leah’s morally compromised former coworker Gary just before he could tell Delilah the real deal on those faulty radios the company manufactured. That, coupled with the way the company tried to buy Leah’s silence, definitely has Delilah pulling receipts. Delilah also has something Tamara doesn’t: Mason (The Walking Dead: World Beyond‘s Joe Holt). He’s the detective and clean-up man of sorts that snoops around and gets Delilah the intel she can’t dig up on Google. 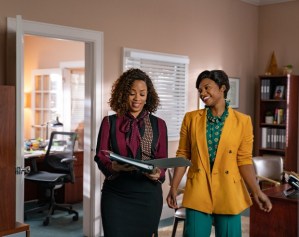 And her team, which also includes her diligent assistant Harper (Superior Donuts‘ Ozioma Akagha), could be expanding. Although Delilah told that fresh-out-of-law-school grad Demetria (Susan Heyward) that she didn’t have the budget to hire her, something tells us she will find a way to add her to her staff. Delilah will have to rely on all the help she can in order to take down a company like Osborne Tactical.

Other touches of note in the premiere include the use of Mary J. Blige’s “Work That” in the opening credits. Not coincidentally, this is the same song Vice President Kamala Harris walked out to when she and President Biden won the election. Delilah, in addition to taking care of her own two kids, is also helping to raise her adorable nephew Dion. He’s the son of her younger brother, a military veteran whose injury during his second tour has left him wheelchair bound. Yup, Delilah is a bona fide superwoman, but she’s still human, and she even wears a silk bonnet on her hair when she goes to bed. And chile, it doesn’t get more authentic than that.

Give the Delilah series premiere a grade in our poll, and hit the comments to share your first impressions. Will you keep watching?