After nearly a year since he was last seen at New Amsterdam‘s hospital, Dr. Floyd Reynolds returns to his old stomping grounds in this Tuesday’s episode (NBC, 10/9c).

The cardiovascular surgeon is back with a mission: to save the life of his former colleague Dr. Vijay Kapoor, whose battle with COVID has destroyed the muscles around his heart. But much has changed at the hospital, leaving Reynolds feeling like an outsider, his portrayer Jocko Sims previews in the following Q&A.

TVLINE | How does Reynolds feel about being back at the hospital?
He’s feeling a little bit like he should’ve been there. He’s feeling guilty because his hospital had three deaths. New York had, unfortunately, way more than that, as we know, and he’s feeling pretty sad about that. He’s also feeling like an outsider. He’s not in the computer system anymore, and it seems like his colleagues, at some points in the story, like they’ve just kind of moved on. When you make a return for whatever reason, you want to be missed. You want to know that you had some sort of impact. And the thing about New Amsterdam, and perhaps real hospitals all over the country including Bellevue, is that that’s a machine. It doesn’t really have time to stop and mourn, because there are people on ventilators, and there are life-and-death situations going on. He’s kind of dealing with that a little bit, which is interesting.

TVLINE | At the end of the season premiere, Max calls Reynolds, and the first thing Reynolds says is, “How can I help?” Were you excited to utter Max’s catchphrase back to him?
I was! I got to do it at least one other time when Max came to seek advice from me because he was actually in an African-American community, attempting to give medical care to the men that were in this little barbershop. He comes in, and he says, “Reynolds, I need your help,” and I turn and say, “How can I help?” It was fun and funny and light in that sense. What I’ve learned between watching Ryan [Eggold] have to say the line, me saying the line in a light moment, and then me having to say it at the end of this episode is there are so many different implications there. There are so many different ways to say it. Finding the right tone for [the season premiere’s] line was essential. Peter Horton directed that episode, and we tried it a bunch of different ways. He couldn’t sound too eager when he answered the phone, like, “How can I help?!” He needs to be confident and happy in the space that he’s in, but there needs to be an element of him being happy to hear from Max. And also, we can’t let on that I know, obviously, what’s going on in the storyline. So we settled on like a nice, little smooth welcome-Reynolds-back-type, “How can I help?” and that was great. So I said it a lot, and I’m over it. I don’t know how Ryan handles having to say that line so many times. [Laughs] 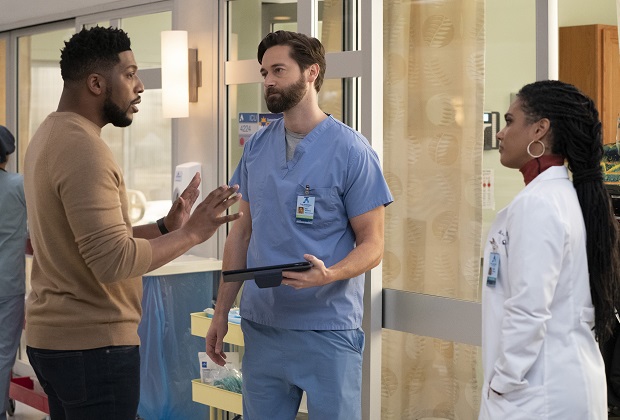 TVLINE | It was the perfect endnote for the episode. Looking ahead at Episode 2, how does Reynolds help? What can you preview about Vijay’s condition and how Reynolds plays into that?
Well, Reynolds, naturally, would be there because his friend needs him. But at the same time, Reynolds is not the end-all, be-all, ultimately. He’s not perfect. He doesn’t have all the answers. So things don’t go smoothly. It’s TV, it shouldn’t. He’ll have to figure out what he can do to save Kapoor’s life, and it will be a collaborative effort.

TVLINE | This is also a colleague and friend of his that he’s seeing in this really terrible condition that he has to help, in a medical sense. So what does that do to Reynolds?
What I have found in doing this part of the show and even having seen pieces of it, ultimately, I see that Reynolds is the consummate professional, regardless. And through this tough time, he’s actually there moreso for his colleagues around him who are suffering through this, as well for Kapoor. He remains pretty strong, vigilant and adamant about saving his life, and he keeps it pretty professional.

TVLINE | Do you think that’s because they have been there through the whole arc of Vijay getting sick, whereas Reynolds has been away in San Francisco, so he’s able to kind of separate himself from it a little bit more than they can?
Well, in my mind, I would’ve written it maybe the opposite, perhaps, and this is why I’m not a writer. I would’ve made the mistake of Reynolds being so affected by what he’s seeing, seeing his friend. And that’s not to say that if someone were to go that direction with creating this story that that would be wrong. It’s just an interesting choice to have Reynolds know why he’s there, know what he needs to do and put all of his effort into that. I will say if something happens with Kapoor, the writers have the ability to know when there will be some time for him to deal with that. But right now, he’s all about saving his life and getting it done.