“This is what I’m meant to do,” Olivia Liang’s Nicky Shen says in the first trailer for The CW’s action-drama Kung Fu, a reimagining of the 1972 classic starring David Carradine.

Kung Fu, which premieres Wednesday, April 7 at 8/7c, finds Liang (Legacies) starring as a Chinese American who decides to drop out of college following a quarter-life crisis. After a life-altering journey to an isolated monastery in China, she returns home to find the town rife with corruption and crime.

Shen uses her “martial arts skills and Shaolin values to protect her community and bring criminals to justice… all while searching for the assassin Zhilan (Yvonne Chapman) who killed her Shaolin mentor Pei-Ling (Vanessa Kai) and is now targeting her,” the official description reads. 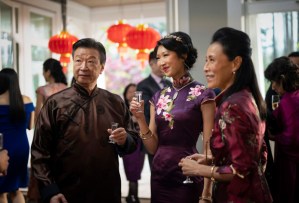 In addition to Liang, the CW drama also stars Tzi Ma as Nicky’s father Jin Shen, a restaurant owner with secrets of his own that could bring down their family business; Kheng Hua Tan as Nicky’s mother Mei-Li Shen, a woman who helped her husband with his business and also holds damaging secrets; Jon Prasida as Nicky’s brother Ryan Shen, a quick-witted pre-med student; and Shannon Dang as Nicky’s tech-savvy older sister Althea Shen, who just got engaged and is focused on planning the perfect wedding for her perfect life.

Watch the trailer below and let us know in the comments how you feel about this forthcoming series.