You have concerns about NBC’s Debris sticking around for the long haul, and the sci-fi drama’s co-lead, Jonathan Tucker, is here to address them.

Airing Mondays at 10/9c and created by Fringe‘s own J.H Wyman, Debris stars Tucker (Kingdom) and Riann Steele (The Magicians) as Bryan Beneventi and Finola Jones, agents for the CIA and MI6, respectively, who have been paired up to track down the fallen debris of an alien spacecraft wreck that was spotted six months prior by Finola’s late (?) astrophysicist father.

Given the series’ decidedly sci-fi trappings and how impatient broadcast-TV can be with genre fare, some have been reluctant to get invested. Here, Tucker speaks to those valid concerns, while also previewing the mind-bending twists to come.

TVLINE | When reading this pilot, what specifically jumped out at you and made you say, “I’ve got to do this”?
Well, I’ve gotten to this point, 27 years later, since I first started working as an actor, of understanding that you really have to look at the whole package. And what’s exciting about doing television is that it’s a writer’s medium and you’re going to be executing the vision of the showrunner. So it might be a great script, but if the showrunner isn’t as good, you’re going to run into trouble. Having done a bit of sci-fi with Westworld, I understand how exciting that genre can be for an actor, because there is no realm of possibility that’s off limits. [Upon meeting Joel Wyman] I was like, “Oh, this is definitely a showrunner that has navigated these waters successfully before.” And then I was like, “Well, is he a good guy? Are we going to creatively get along? And does his creative process align with mine?” We sat down and had lunch, and I don’t know if I’ve connected to somebody so quickly and so well as I did to Joel. He’s not just a successful and talented writer, he’s a truly decent man.

Some of the people who are sci-fi fans, they’re like, “Does the show know where it’s going?” Yes. Yes, it does. “Does the show have enough of a story engine to get there?” I can affirm that it does. Then it’s like, “Will NBC cancel it, before it has time to get there?” [Laughs] I can’t speak to that with the degree of confidence that I can having read all of the scripts and having spoken to Joel, who knows the last line of the first season and he knows the last scene of the last season, but I can say the partnership with NBC, up until this point and particularly after the premiere, has been remarkable.

The networks understand, now, more than ever, people are consuming content in a very different way. They recognize that there might be a whole group of people that are not going to watch a single episode of Debris until we conclude our 13 episodes, and then they’re going to binge it all on Peacock. They’re being patient in that respect. 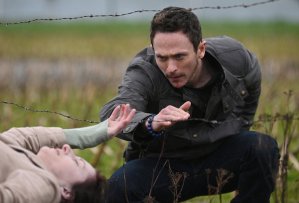 TVLINE | Give me a sense of the different ways that the debris will interact with the world. I assume it won’t always be as touchy-feely as in the premiere.
That’s correct. The debris is a lot like a mirror, in that it’s not really good or bad; it’s kind of what you put in front of it, and it affects the weekly storyline as much as it does the overall mythology and the two partners, Bryan and Finola, who are tasked with retrieving it and with dealing with the fallouts and the people that come in contact with it. The first five-ish episodes, I think, provide a pretty good handrail for the audience, getting them onboard and into the world. And then from there it really starts to build out into the mythology and the character development of this partnership.

TVLINE | Will the debris’ effects ever be scary versus just eerie?
The episodes we’re shooting now are not even really all that eerie, they’re almost like… I think sometimes we toggle between the brothers Nolan [Memento‘s Christopher and Westworld‘s Jonathan] and like a vintage [Steven] Spielberg, in terms of we’re having a bit of fun but there’s also real mind-bending elements in it. The two episodes that we’re shooting now deal with lapses and cascades of fractures in time. So, we get a lot of different elements into the show every episode. 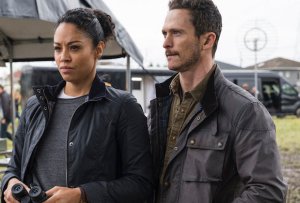 TVLINE | I liked how we picked up with Bryan and Finola already working together. But will we ever flash back to their first days, their introduction?
I don’t think so. I don’t think so. I think it’s a unique time in which we’ve found them because, yeah, they know each other and have been working with each other, and there’s not the typical adversarial sort of partnership that you see in a lot of shows — you know, where he’s brash and she’s conservative. I don’t want to do that. And we don’t have a romantic relationship, which is fun, too.

TVLINE | They’re just two people who are very good at their job and are working together.
Right. Right. And we’ll have to be better to succeed. And we’ll have to recognize in each other that we both have a skillset that the other one should use and leverage. In the pilot of X-Files, I heard, they tried to push a bit of a romantic relationship between Gillian Anderson and David Duchovny, but they recognized pretty quickly it didn’t work, and it was a lot better [to start] with them being platonic. I think we’ve hit it pretty squarely in the pilot where these two characters are, and that dynamic will continue to play out.

TVLINE | Is there a specific reason why Bryan was emotionally taken aback in the pilot, when Isla talked about losing her brother, growing estranged from her mother?
Yes. We’re shooting the big Bryan episode next, which provides all that back story on that PTSD, what he experienced in combat, and how Maddox found him and why Maddox is that kind of father figure. I kind of laughed with Joel on a call, I said, “You realize the logline for the first season is essentially the same as any Pixar movie — somebody trying to find their father and somebody saying goodbye to their father.” 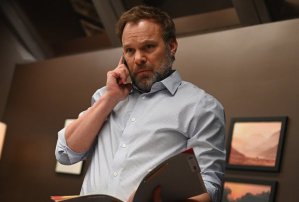 TVLINE | I was going to ask you how you would describe the dynamic between Bryan and Maddox.
He’s a father figure to him, and I start to learn quite a bit about Maddox that doesn’t align with what I had originally thought. And as I’m trying to investigate that and compartmentalize it, or justify it, the world becomes significantly more complex.

TVLINE | Bryan is now keeping a secret from Finola, that her father apparently is alive. Will the tables be turned, and she will at times have to keep things from Bryan?
Right off the bat. And that’s where I think the story gets really unique, because I was not in the place where I wanted to get into a procedural show, and Debris is not procedural. It’s unequivocally not procedural, but there is something that is wrapped up every week, and as the season goes on, all of a sudden I think you’ll look back and go, God, they added so much meat to this, because of the background of these characters, the dynamic between them, the influx story line, the different governmental rivalries, what the debris is capable of…. You’ll look at the first season as an origin story.

TVLINE | The famous Fringe story, of course, is that J.J. Abrams didn’t tell Fox that it would be a show about alternate universes when he first did the pitch — because no network is going to buy that show.
They wouldn’t have bought it, right. I think things have changed, obviously, since then. I think Joel has been able to prove that he can turn people around a bit on these sorts of things, audiences, so that’s the benefit, really, of getting to work with a showrunner of that caliber and that experience. There’s a lot more freedom that’s offered, and that certainly has been the case in our conversations in the process with Legendary and with NBC.