With nine queens remaining after just as many episodes, Season 13 is starting to feel like the longest one in herstory. But as Kandy Muse is quick to remind TVLine, “Baby, you can never have too much Drag Race.”

Ahead of tonight’s highly anticipated Snatch Game (VH1, 8/7c), we caught up with two of this season’s standout queens — New York City’s Kandy and Rosé — to discuss their recent triumphs over drag-versity:

TVLINE | Since you’re both New York queens, what was your relationship with one another before the show started?
ROSE | Kandy and I had worked together once or twice, but we weren’t super close. We’ve become really close friends since the show aired.
KANDY | Rosé’s drag sister [Jan] and my drag sister [Dahlia Sin] were on Season 12 together, so we had that in common. The city is big, but the drag community is small, so I heard a little rumor before we started filming that Rosé was going to be on Season 13 with me. I reached out and was like, “Bitch, let’s have a good time!” And now we’re really good friends.

TVLINE | I feel like everyone’s closeness was really apparent in last week’s COVID special. Orange you glad we got to see that side of you?
ROSE | [Laughs] Actually, it was yellow — but yes, absolutely.
KANDY | We do fight and argue, like sisters do, but we’re a really close cast. We filmed this show during COVID, as you saw in that special, so we were the only people each other had.

TVLINE | You’re both coming off an extremely eventful episode. Kandy, I’m just going to say it — I thought you won that lip sync.
ROSE | Oh, s–t!
KANDY | What made that lip sync so good was the different styles that Symone and I brought. That’s what makes any lip sync amazing, when two different artists are doing their own thing. Symone’s an incredible performer, but I went off!

TVLINE | Have you gone back and watched it a million times like the rest of us have?
KANDY | There are parts of the show I’ll go back and watch, but I remember watching that the night it aired. I was like, “I lived through this, so I know what’s going to happen.” But nothing could have prepared me for the emotions I was going to feel watching it back. It was like watching myself lose my dreams on TV. I’m narcissistic and self-centered, so yes, I watch all the time. [Laughs] 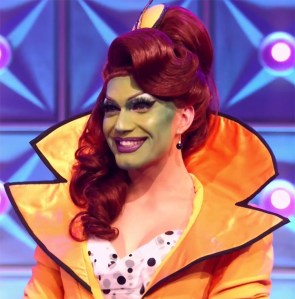 TVLINE | And Rosé, condragulations on your win. I was really hoping they’d sing “the winner is Rosé!”
ROSE | Right? I thought I really put that into motion, but it didn’t end up happening. It’s all good, because the fans keep singing it to me anyway.

TVLINE | I gasped when you hit the runway in that Mask outfit. And with all due respect to Michelle Visage, that dress was yellow!
ROSE | Listen, I don’t give a f–k if it was yellow. I won, and that’s all that matters. I could have been wearing red, I don’t care. [Laughs] The real tea is that it was a borderline mandarin color. But it just so happened that when you looked at all the girls on stage, everybody else was wearing a beautiful, bright canary yellow — expect me. So of course I stuck out. Had the girls ventured out a little like me, maybe I wouldn’t have looked so orange.

TVLINE | You also got to “meet” Anne Hathaway last week. Which other celebrities have you been excited to hear are fans?
KANDY | When you come on Drag Race, you know that people watch, but like… Ariana Grande and Miley Cyrus just followed me on Instagram and sent me DMs. And to me, that’s so gaggy. These are queens in the gay community — divas! — and you never expect them to reach out. You just go on TV, show your art and you hope that people like it.

TVLINE | And now we have Snatch Game! It always bugs me when a queen comes on not knowing who she’s going to play. Did you already have characters in mind?
ROSE | When you audition for Drag Race, you include a little Snatch Game section in your piece with a few different characters. And Kandy and I have both auditioned more than once, so we’re no strangers to trying out different things. We’re also both longtime fans of the show, so we’ve seen people fight over wanting to play the same character. You bring a few options, just in case.
KANDY | I’m definitely not one who normally does celebrity impersonations. But when it comes to Drag Race, you know you’re going to play it.

TVLINE | And how did the expectations compare to the actual experience?
KANDY | Obviously when you’re watching from home, you’re like, “I would have done this and this…” but being there in person is a whole other ball game. It’s a hard one, but it’s special, and I can’t wait for everyone to see our Snatch Game. I will say, it’s going to be a good one.

TVLINE | This show has been a gift to us during quarantine. What have you been watching?
ROSE | Over the past year, even with a whisper of me potentially being on the show, I went back and watched all of Drag Race. I had to brush up on my Shakespeare. Some of my favorite [Snatch Game performances] are the obvious ones, like BenDeLaCreme as Maggie Smith. But I also love the surprise sneak attacks like Aquaria and Gigi Goode.
KANDY | I’ve been watching a lot of Drag Race UK Season 2. Before the show, I also brushed up on my Snatch Game characters. I think the most iconic was Kennedy Davenport as Little Richard. It was so odd and bizarre and good.

TVLINE | Well, Kandy, I know you haven’t been watching WandaVision, because you literally tweeted the other day “What’s WandaVision?”
KANDY | [Laughs] The WandaVision fans are nuts, and I love it. I thought our fans were really passionate. I tweeted “What is WandaVision?” because I was genuinely curious. I don’t know when it comes on, but I feel like I see it on my timeline on one specific night when everybody watches it together. I tweeted that, and the fans were dragging me. I don’t even know what they thought.

TVLINE | If you ever do watch, please let us know.
KANDY | [Laughs] I will.