After two long weeks of peace in the queendom, another contestant was finally sent packing on Friday’s episode of RuPaul’s Drag Race, which featured the long-awaited Snatch Game of Season 13.

Let’s start with the few good performances, some of which could potentially go down in the annals of herstory alongside the all-time greats:

* Gottmik as Paris Hilton was frighteningly spot-on, easily the best of the bunch. From the fake voice to the facial contouring to the Ibiza shoutout, it was just *chef’s kiss* perfection from start to finish. I wish the jokes had been a little stronger, but I’ll settle for pretty funny and disturbingly accurate.

* Symone as Harriet Tubman was definitely among the night’s riskier choices; even Symone admitted, “I understand how it could be offensive, but I don’t want to let that stop me from doing it.” And she didn’t let it stop her, turning out one of the more hysterical performances. In fact, I really thought it could be a winner… that is, until she got Jenifer Lewis and Jennifer Lawrence mixed up. That definitely knocked her down a peg.

* Denali as Jonathan Van Ness finally earned this forgotten queen some proper critiques from the judges, and they had nothing but good things to say about her overall performance. The energy, the hair flips, the collective vocabulary of a Lisa Frank sticker book… it was shockingly entertaining.

* Rosé as Mary Queen of Scots definitely looked the part. Was she funny? The judges seemed to think so! Honestly, I could barely understand a word she was saying, which is part of what Ru & Co. seemed to enjoy. Overall, I thought this was always in danger of veering into the “too intellectual” category, but Rosé managed to keep it on track. And it was all worth it for that Kandy Muse confessional moment: “Baby, I don’t know who the f–k Mary Queen of Scots is, but Rosé has this funny ass Ireland accent.” How many times can a person go wrong in one sentence?

Now for what I call the “blah” category, the inoffensive-but-uninspired performances that I didn’t hate… but also won’t remember for much longer:

* Tina Burner as Richard Simmons had a lot of potential, but I don’t think it ever quite made it out of the gate. The energy was definitely there, but the jokes simply were not.

* Kandy Muse as Patrick Starrr was fine. I’ll admit, I don’t know a whole lot about the make-up mogul. Does he normally eat bananas without taking the peel off? I did my due diligence and looked up a few of his videos, and I didn’t think Kandy really bothered trying to sound like him, either. It wasn’t good, but it wasn’t terrible. It just… was.

Now for the truly awful performances, the ones for which apologies are owed:

* Olivia Lux as Tabitha Brown was really disappointing, especially considering how excited Olivia was to play her. Then again, I should have predicted it would go down in flames after Olivia spoke so highly of her work in the last improv challenge. You know, the one where she was literally a mime with no dialogue? She may have perfected Brown’s look, but a few jokes would have also been a plus.

* Utica Queen as Bob Ross was a damn nightmare from the moment we got a look at that wig made out of squirrels. (As Utica explained, she didn’t think it was appropriate to wear an afro in 2021… which even Ru found completely insane.) And did she really eat that green paint? I don’t care if it was non-toxic, it was weird as hell. And not in a good way. Her whole performance gave me major serial killer vibes.

* Elliott With 2 Ts as Rue McClanahan made me want to reach my hands into the TV and shake some sense (or at least a few jokes) into her. Why would you choose to play one of the Golden Girls — a show RuPaul had admittedly watched 25 times all the way through — unless you were confident you could absolutely nail Blanche Deveraux? [Pause to give Sophia time to make a joke.] The only good thing about Elliott’s flat performance was that it actually gave me more appreciation for how nuanced and complex McClanahan’s character really is.

I can’t fully argue that Gottmik shouldn’t have won this challenge; her Hilton impression was spot-on, and her runway look — complete with Swarovski blood dripping from the giant safety pin stuck through her head — was phenomenal. 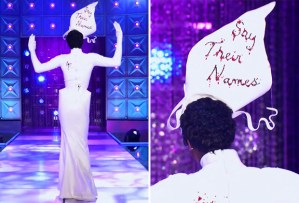 But in what universe was Symone merely “safe”? Not only was she hysterical in the Snatch Game (save for that Lewis/Lawrence snafu), but her runway look was a moment. Dressed in all white, with gunshots in her back and “Say their names” printed on her fascinator, she used her platform to make a powerful statement. I’m glad Ru acknowledged that before sending Symone to safety, but I would have preferred that she remain on the stage like the top contender that she was. End rant.

This week’s bottoms, meanwhile, were no surprise. The judges may have enjoyed Utica and Elliott’s runway looks — which were inspired by picnics and flamingos, respectively — but they failed too hard at the Snatch Game to avoid a punishment. Utica knew she’d need to give this her all in order to stand a chance against proven-assassin Elliott… and that’s exactly what she did. The queens watching from the back of the stage seemed to be living for Utica’s every quirk and kick. Whereas Elliott took a slightly sexier approach to Company B’s “Fascinated,” Utica opted for a more comedic performance. And it paid off.

When the music finished, Elliott and every single last one of her Ts were sent packing. Would you have sent her home? And who delivered your favorite Snatch Game performance(s)? Weigh in via our poll below, then drop a comment with more of your thoughts.