Disney Channel’s new sci-fi drama Secrets of Sulphur Springs (Fridays, 8/7c) often draws comparisons to Stranger Things. The titles even rhyme. But in this week’s installment, Sulphur Springs will tackle something the Netflix hit has not — racism.

The trouble starts when Griffin (Preston Oliver) and Harper (Kyliegh Curran) travel back in time to 1962 to find Savannah (Swamp Thing‘s Elle Graham) at the then-bustling Tremont Hotel in New Orleans. It’s, of course, the same hotel that Griffin’s family purchased in the present to refurbish and return to its former glory. As you’ll see in TVLine’s exclusive sneak peek from Friday’s episode, titled “No Time Like the Present,” a bellhop stops the tweens from entering and says Griffin (who is white) can come in, but Harper (who is Black) cannot. 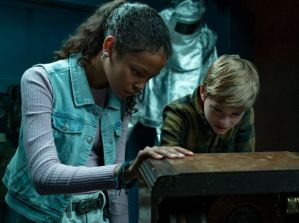 While shows such as Timeless have tackled the bigotry Black and brown time travelers would experience, this is heady stuff for a show aimed at kids. But series creator and executive producer Tracey Thomson says she chose not to shy away from the subject, despite the age of her show’s average viewer.

“Since the beginning, Griffin and Harper have been on the same adventure — sharing the wonder, confusion and excitement of time travel,” Thomson tells TVLine. “Sending them to 1962 allowed us to explore the realities of the era through two completely different perspectives. While Griffin is blindsided by the overt discrimination, Harper is bracing for it from the moment they go back in time. This shift in their dynamic carries through to the present.”

Much like Griffin, EP Charles Pratt Jr. is saddened that racial discrimination ever happened, much less six decades ago.

“It’s shocking to see what was accepted behavior,” Pratt says. “Through our show, we saw an opportunity to look at the injustices through the eyes of contemporary young [people] and posit the question: How far have we really come?”

Press PLAY below for a sneak peek at this week’s Secrets of Sulphur Springs: