With WandaVision coming to an end this week, plenty of questions remain about how the Disney+ series will close this chapter of the titular hero’s story.

Episode 9, which arrives Friday, March 5, will hopefully offer some much-needed answers to our many burning questions, like what is Hayward’s endgame, who is Monica’s aerospace engineer friend, and what’s the deal with Agatha, who is Scarlet Witch’s mentor in the comics?

Matt Shakman, who directed all nine episodes of the season, says he’s grateful for the overwhelmingly positive response so far and understands that not everyone will be happy with how it ends.

“We build this show with so much love and passion and care and attention to detail, and you just cannot understand how appreciative we are that the fans have embraced it with that much love and passion and attention to detail and theories, which are incredible,” he tells TVLine. “And I know there will be a lot of disappointed people with some theories and some who will feel very smart, but you can’t please everybody, obviously. But I hope folks enjoy the ride.”

The series serves up a standalone story that novices and eagle-eyed fans alike can understand while also setting up the Marvel sequel Doctor Strange in the Multiverse of Madness, due to be released in theaters in March 2022. Per Shakman, the finale will pull double duty in delivering a gratifying ending to Wanda’s emotional journey while also leaving things open for the witchy Avenger’s story to continue on in other forms.

“We were trying to tell a complete story in terms of the narrative around Westview, N.J., and we hope that there’s some resolution to that story, and that it is satisfying and also surprising for the fans,” he explains. “But Wanda will continue into Doctor Strange [in the Multiverse of Madness], and there’s a lot more to her story to be told, so this is only one part of a very complicated and very rich life.” 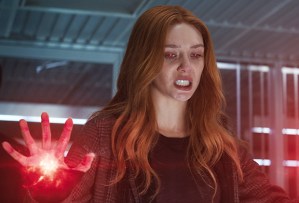 Wanda’s story so far has been one of overwhelming grief and trauma after losing her parents, her twin brother Pietro, and the love of her life, Vision. Her pain informs the entire series, which is centered around the idyllic fictional world she created — hijacking the town of Westview in the process — as a super-charged coping mechanism.

“Wanda has suffered more loss than anybody in the MCU. She’s gone through so much and that was always the emotional core of WandaVision, exploring loss and how we come back from [it],” Shakman says.

But Wanda isn’t the only one dealt more than their fair share of loss. The series also explores Monica Rambeau’s experience with grief, having returned from the blip to a world in which her mother is dead and everything has changed. “You have these two parallel stories of people dealing with grief,” Shakman notes.

“Episode 8 allowed us to really pull back the curtain on it,” he continues. “It’s been there throughout, but we were able to spend a lot of time with Wanda in these key moments where she experienced loss, but also great love. I think they’re connected, and that’s one reason why the scene of [Wanda and Vision] coming together as a couple in the Avengers compound, sitting on the bed together talking about losing Pietro and Vision saying, ‘Grief is love persevering’ is the core of the whole show. [It’s] one thing they offer each other, how Wanda tries to find solace for this this unbelievable pain.”

Wanda and Vision’s love will likely be tested in Episode 9 following the reveal that S.W.O.R.D. has rebuilt Vision using a sample of Wanda’s energy syphoned from the drone that pierced through Wanda’s alternate reality bubble. With two versions of the synthezoid now in existence — White Vision and Wanda’s Vision — Shakman hints at a major question looming over the finale: “Who is the real Vision?”

There’s also the question of what’s next for Agatha and Wanda, who ended Episode 8 on the cusp of a major showdown since Agatha had been holding Wanda’s children hostage. Although they’ve been cued up as opposing forces, it’s clear they share a few commonalities: namely, being skilled witches too powerful for their own good.

“I think both Agatha and Wanda can learn from each other. Certainly, at the very end of Episode 8, Wanda is learning a very big piece of information about herself from Agatha, and Agatha is trying to figure out the secret of what Wanda has so that whole episode is an exploration of who is Wanda Maximoff is,” Shakman concludes. “We look at her past because we want to figure out what her future is.”