SpongeBob Movie: Sponge on the Run stages the franchise’s most epic run-in yet when the film’s porous and absorbent lead finds much-needed spiritual guidance from a magical tumbleweed named Sage (played by Keanu Reeves), bringing two larger-than-life characters together on screen.

According to writer and director Tim Hill, who also penned the first SpongeBob Movie and served as a writer on the animated series, no one but Keanu was suited for the ethereal guest appearance.

“When I wrote the character, I kept having Keanu in my head so I never really had another person that we were thinking about. It was so lucky that he was like, ‘Sure, I’ll do that,’” Hill shares. “We made little Keanu drawings so long before he actually agreed, he was kind of in the movie. We had temp voices doing him and the momentum was too much.” 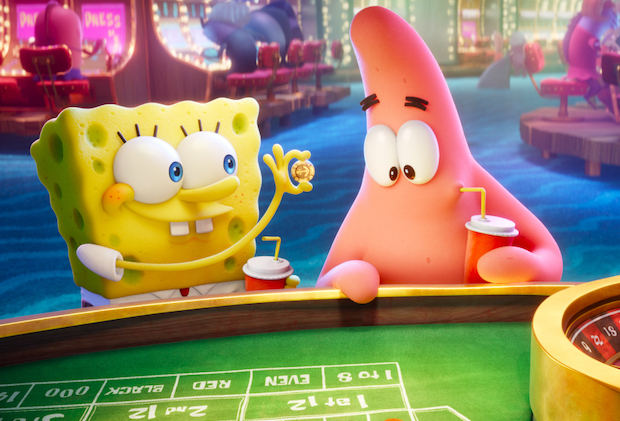 Sponge on the Run — which premieres Thursday, March 4 on Paramount+ (currently known as CBS All Access) — follows our titular hero and his best friend Patrick on a wild journey to Atlantic City to save Gary, who’s been snail-napped by the mighty King Poseidon. Their quest puts them in the path of many other colorful characters, including the Chancellor, who is voiced by actor and comedian Reggie Watts. This was a unique experience for the Late Show With James Corden house band leader, who is excited to see his character come alive on film. 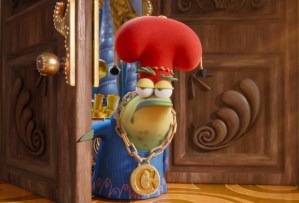 “It’s just crazy,” says Watts. “The thing about animation is you do the voice and you see maybe a picture of a character and then you just go away. It was cool to see what I did and how it contributes to the story. I wasn’t expecting it to be as wild as it was, actually.”

SpongeBob and Patrick’s adventure also includes a flashback to the Bikini Bottom bunch’s younger years, setting up the forthcoming series Kamp Koral: SpongeBob’s Under Years (also set to stream on March 4). The 3D-animated series will follow the adolescent gang as they “build underwater campfires, catch wild jellyfish and swim in Lake Yuckymuck at the craziest camp in the kelp forest, Kamp Koral,” per the official description.

Hill reveals that the film began as an early idea for Kamp Koral before being consolidated into a flashback and then spun off into its own series. “It was never intended to launch a series,” he explains. “It was just something Nickelodeon picked up on and decided to do a whole thing on.” 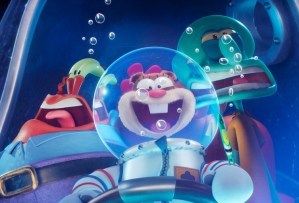 The SpongeBob Movie: Sponge on the Run

With Kamp Koral set to explore the gang’s younger years, fans will get to see these familiar faces in a new light, while for the cast, it’s an opportunity to uncover interesting new tidbits about their characters. Just look at Carolyn Lawrence, who was intrigued to find out “that Sandy wasn’t always the smartest in the room” since that’s how the underwater squirrel usually views herself. Meanwhile Clancy Brown, who voices Mr. Krabs, joked that he was surprised to learn that “my daughter Pearl was once smaller than I was.”

Rodger Bumpass, who voices Squidward, is looking forward to the teal-tinted octopus flexing a bit more power in the prequel series. “I have my little room in the back and when I hear the insanity, I get to storm out like R. Lee Ermey in Full Metal Jacket. I get a little bit more authority than at the Krusty Krab, so that’s fun to do,” he says.

Meanwhile Bill Fagerbakke, who plays Patrick, is excited for fans to see the franchise’s signature earnestness shine through in Kamp Koral “because I think that’s important, especially for young children. I am always very appreciative of that kind of narrative when it manages to find its way into a story.” 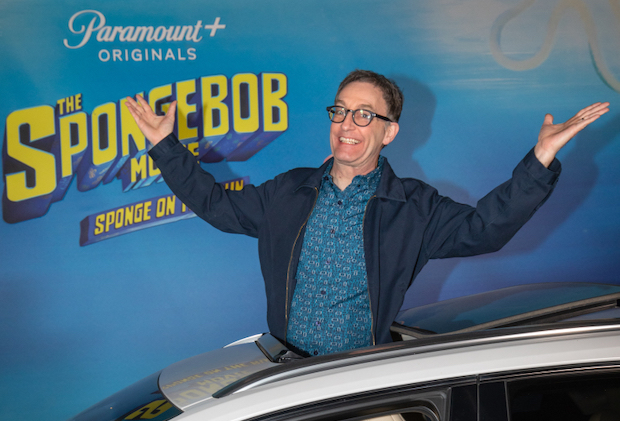 Tom Kenny at Sponge on the Run premiere

It’s been nearly 22 years since SpongeBob SquarePants (created by the late Stephen Hillenburg) premiered on Nickelodeon, arriving at the turn of the millennium when dial-up internet was standard and rewatching episodes meant either waiting for the rerun to air or recording it on VHS. Tom Kenny, who voices the title character, reflects on the show’s two-decade history and how the process has changed amid a global pandemic.

“SpongeBob arrived just before the Internet became such a giant component. There was no streaming 20 years ago,” Kenny explains. “We [recorded] the same way where you go into a studio and we’re all standing around our microphones. We always record together, which is really fun, and obviously we can’t do that now. But  you try to be as real and do it as sincerely as you can, because I think people would smell it if we were phoning it in after 20 years.”

While he enjoys the “eight-second commute” to work, Bumpass says making the new film and series while apart from his costars has been difficult: “Us not being able to be together, to me, it does affect us a bit. We’re professional enough to do the characters, but not being there with people and interacting with my fellow actors in the same room is a little bit isolating — literally and figuratively.”

“You gotta push yourself a little harder to get that cojones-to-the-wall energy that just comes naturally when you’re standing in a room with everybody,” Kenny adds. “It’s more of an act of will to make it happen. It’s a different process, for sure.”