New Amsterdam‘s Season 3 premiere put one of the hospital’s own in serious jeopardy, revealing that Dr. Vijay Kapoor contracted COVID and is still not out of the woods. With the muscles around the doc’s heart ravaged by the virus, Max called upon on the best cardiovascular surgeon he knows for help: Dr. Floyd Reynolds, who had moved on to a new job in San Francisco last season.

TVLINE | Were you concerned about the fact that the show was coming back in March, after most of the other broadcast dramas had already returned and tackled COVID?
PETER HORTON | Yes, in a word. [Laughs] No one wants to have their show be off the air for a year. Then again, this year is so jangled and turned upside down that this abnormalcy is something people, I think, are expecting and not reading too much into or being thrown too much by. But no, we’d much rather have been able to come on sooner. It’s just there was really no way to do it.
DAVID SCHULNER | One of the reasons why is we filmed in real hospitals at Bellevue in New York and Kings County in New York, which were 70 percent of our stages that we used. Our sets were in these hospitals. When it was clear that we couldn’t film in these hospitals anymore, we had to build an entire hospital from scratch, and that’s one of the reasons that we started shooting much later than everyone else.
HORTON | As far as the subject matter goes with the pandemic, it’s sadly continued, so it’s not like we’re coming on after it’s over. It’s just as relevant today as it would’ve been in the fall, when we normally would come on. 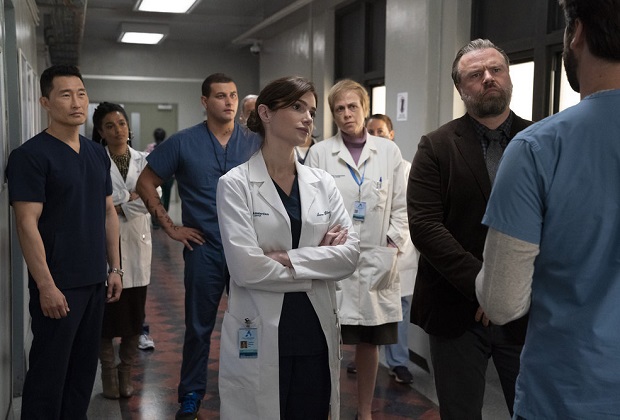 TVLINE | How did that impact your approach to the storylines this season in tackling the pandemic, while trying to be aware of the fact that maybe viewers are fatigued by COVID storylines, but also wanting to be reflective of what’s going on in the world right now?
SCHULNER | We didn’t have that luxury. Unfortunately, we started writing this season in June of last year, and we had to predict what the world would look like six [to] eight months from then, whenever we would air. So for us, when we wrote this season, we were very much living through it. We both needed to honor that, because the show is about first responders in New York City in a public hospital, which was the hardest hit and the epicenter of the pandemic back in April, May and June when we started writing this season. So we knew we had to do justice and honor those people that we were portraying. And then, yes, we also had to tell the stories that we always wanted to tell that had nothing to do with the pandemic, but would irrevocably be influenced by it. And then the dumpster fire of 2020 being what it was, all of a sudden, there was this social justice reckoning the country went through in the middle of the pandemic, in the middle of us writing this season, that we knew we had to deal with also, that we knew we couldn’t ignore. So, really, we were dealing with two major crises as they were happening and didn’t have the luxury of saying to ourselves, “We hope people aren’t tired of the pandemic or the social justice movement that swept through America by the time we air.” We just had to deal with it.
HORTON | The good news, on top of that, is the nature of our show is about healing, just innately. This year, really, is about healing from all of that. It’s about acknowledging [those issues], bringing them forward, because we have to. We can’t ignore it. We have to bring it forward and find ways to heal, find our way through them, not just dwell in them and feel the suffering that we’ve all felt. It’s acknowledging the suffering, and then the change to, “How do we heal? How do we each do it?”

TVLINE | The premiere opens with a montage of the worst days of COVID in New York, but then we see the staff getting vaccinated. How much does COVID play into the storylines moving forward?
SCHULNER | What we’ve tried to do [is take the] stories [that] aren’t being told and focus on those. What’s the psychological toll on kids who are cut off from their friends and socialization? Those issues weren’t being talked about at the beginning of the pandemic, because we were all just fighting for our lives. But we knew that those stories were going to be told, eventually, and we wanted to be the ones to tell them. So one of our earliest episodes is about the effects on kids, just from being isolated from each other. Everyone knows the story of the first wave, the second wave, the third wave, the ICUs, the ventilators, and we’re trying to go beyond those to tell more human stories and stories that maybe the mainstream news isn’t reporting, but [that] are just as important, nonetheless. 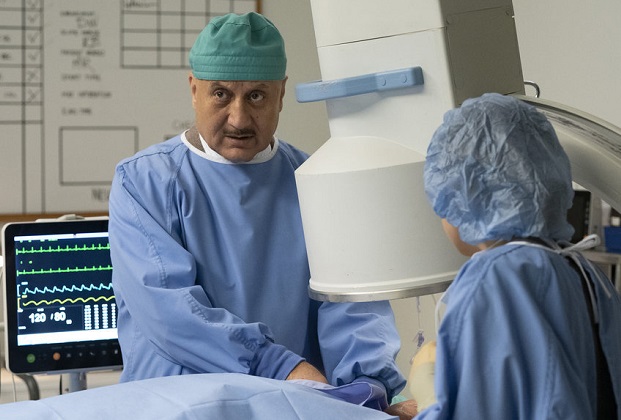 TVLINE | It’s obviously a big deal when it comes to Vijay and his condition. Why did you decide to have him be the character within the hospital who would contract COVID?
SCHULNER | We are using footage from our pandemic episode from Season 2. In that episode, Kapoor caught the influenza virus, and it gave us an opportunity to use this footage that we shot, some of it in our large Bellevue atrium that we obviously can’t shoot at anymore. So it worked on a lot of levels to have Kapoor be the one to contract the virus, and as the oldest physician in our cast, he was obviously the one most vulnerable to it and the most susceptible to dying from it. He was obviously the most dramatic choice.
HORTON | And beloved. That’s always good when a beloved character’s in jeopardy. [Laughs]

TVLINE | What can you say about his condition after Episode 1?
HORTON | We’re definitely honoring the seriousness of this. That was part of the plot, as well. You can’t really have a show that takes place at ground zero for this pandemic and not have the impact of that be demonstrated through one of your main characters. So it’s serious, what he’s going through, and it’s a real challenge for him. We’re not pulling any punches with that.

TVLINE | At the end of Episode 1, because of the seriousness of Vijay’s condition, Max calls upon Reynolds for his help. First of all, how much was the Reynolds storyline arc affected by the last season getting shortened? And what can you tease about his return to the hospital?
SCHULNER | Well, he’s only returning to do Vijay’s surgery, and it gave us a great opportunity to bring Reynolds back for at least one episode to do this surgery. He was going to be living in San Francisco, practicing at another hospital as of last year, and again, none of this was planned. Season 2 didn’t end with any of this or set up any of this, because we didn’t know it was going to happen. Like everyone else’s lives [which] got interrupted and went down a road no one anticipated, it’s true for the characters on our show. All their stories from last year are interrupted and put on hold or diverted or completely upended, and we’re following through on that. 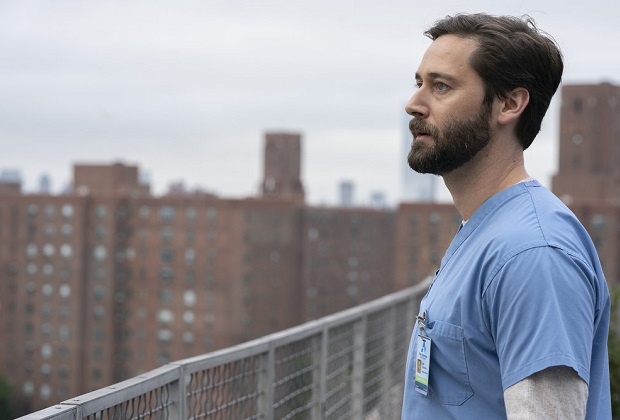 TVLINE | We have Max, as the head of the hospital, with all of this on his shoulders, and he’s also been separated from Luna for a very long time. What can you preview about his arc this year?
HORTON | Max’s first two years, he was a hero. He was going in, solving all these problems in the hospital, and [he was] very capable. He’d have his struggles, but these are hills he could climb and get over. One of the things that this pandemic has done has made these hills into mountains, and what you’ll see is how much harder it is for him to try and make this system work, to make anything work, and it’s like he says in the first episode: “I don’t really even want to fix it anymore. I want to tear it down.” It’s revealed such steep climbs to these problems, that he’s going to struggle a lot more and to be humbled a lot more this year than he has been in the past.
SCHULNER | Yeah, there are no quick fixes this year.

New Amsterdam fans, what did you think of the season opener? Grade it below, and stay tuned to TVLine for more scoop on Season 3!