After solving the “incredible puzzle” that is filming amid a pandemic, The Flash wound up starting Season 7 even stronger than originally planned.

What is now The CW’s most senior Arrowverse series had to cut Season 6 short by three episodes, when production was halted almost a year ago. A  version of those leftover episodes will now launch Season 7 on Tuesday, March 2, and soon enough close the book on Graphic Novel No. 3 (which saw Efrat Dor’s Eva McCulloch trap Candice Patton’s Iris West inside the Mirrorverse). 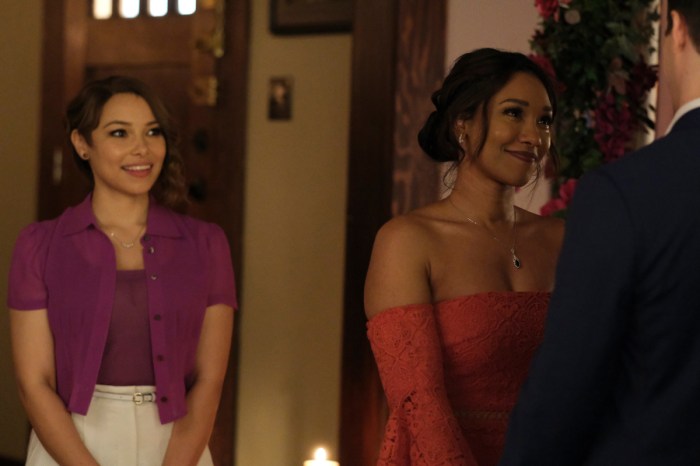 TVLine spoke with showrunner Eric Wallace about how the conclusion of the Mirrorverse arc changed over the course of the supersized hiatus, how a depleted Team Flash will resort to “extreme measures” to shatter Eva’s devious dreams, the uniquely interesting journey ahead for one character, and much more.

TVLINE | You ended last season with three unfinished episodes. Did it in fact wind up taking all three to finish the Eva McCulloch arc?
I don’t know if it’s a spoiler or not, if I can say that, but with the early part of the season we do address last year’s cliffhanger. In the first few episodes we’ll be getting Iris out of the Mirrorverse, all those good things, and we will be wrapping up the Eva McCulloch storyline — before launching into a brand-new Graphic Novel. 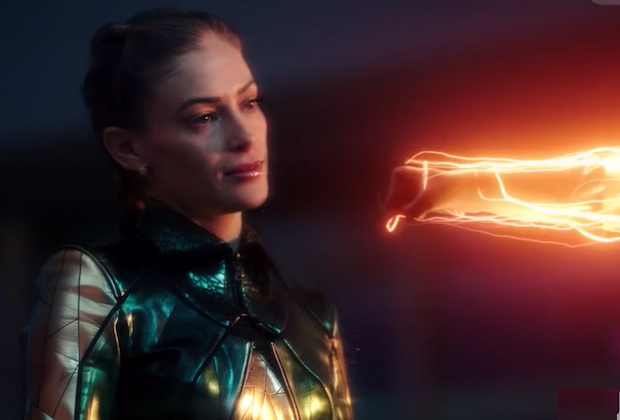 TVLINE | You had a long summer and then some to noodle with those leftover episodes. Outside of the whole Ralph thing (cast member Hartley Sawyer was fired in June), did you end up making any changes?
Yes, the first and the third episodes of the season changed. The first changed about 20 percent, let’s say. Our premiere was not intended to be a premiere, so we had to give it an entirely new opening that had more Flash-y action, because people want to see Flash (played by Grant Gustin), and Eva McCulloch in her Mirror costume. We had to re-engineer the entire first third of the premiere, which was a really fun challenge, but I think it made the episode much stronger.

In order to then wrap up Eva’s story, there was an episode early in the season that literally we had to change almost half of it. That was also due to COVID, too. Usually to wrap up a storyline we have hundreds of extras and all of these things going on in downtown Vancouver, we blow up cars…. We have a sense of scale and spectacle to end the Big Bad, and we couldn’t do that because of COVID, but we still had to have spectacle — so how do you do that? And we had to deal with the loss of a cast member in the Elongated Man, who was very wrapped up in that story, because we have to exonerate Sue [of Joseph Carver’s murder]….

It was an incredible puzzle to finish Eva’s story, but you make lemonade out of lemons and the episode is stronger as a result. We found clever ways to bring in scale by relying a bit more on visual effects, and we had to rely more on character emotions and the actors themselves, and how things were introduced, and how twists were presented. When we wrap up Eva’s story, there are some real surprises for the audience that would not have existed in the same manner if there hadn’t been this COVID interruption. 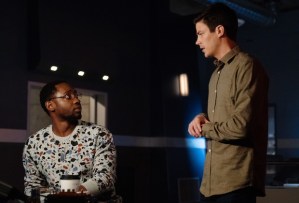 TVLINE | What was it like looking at that first episode back, where Iris is somewhere else, Cisco (Carlos Valdes) is off the map, Caitlin (Danielle Panabaker) is off the map, Ralph is off the map…? Talk about the challenges and opportunities that presented.
It was an opportunity because Barry also is losing all of his speed at this point. Team Flash is at their lowest point, which means they can’t fight, so whatever happens will push them to extreme measures — and that is the plot of the season premiere. What extreme measures do they adopt, and what are the consequences of that? Barry without all of his usual Team Flash helpers needs his speed back in order to fight Eva, so you’ll see that happen… but maybe not in the way you thought. 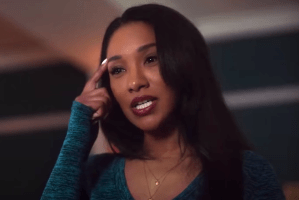 TVLINE | Still trapped and at risk of going mad inside the Mirrorverse, will Iris need to shift into a new gear in order to help save herself?
Well, that’d be a spoiler…. Let’s just say you can’t get out of the Mirrorverse and not be unaffected when you return to real life. And what does that mean for Barry and Iris as a couple? Without spoilers, it is very fair to say that once Iris gets out of the Mirrorverse, yes, she will rejoin Team Flash as an active member and help bring down the McCullochs once and for all.

TVLINE | Without spoiling it at all, the premiere features one of the funniest sequences in the show’s history. Was that always in that episode, or did it get added in?
That sequence — which I also think is one of the funniest things we’ve done in a long time — was always there. There would have been a little more of it, though. Unfortunately, we didn’t get to go as deeply into it.

TVLINE | Regardless, it’s this great little burst of lightness amid an incredibly intense arc.
And that was on purpose. We were like, it’s getting really intense here, we need to have some laughs. This season premiere — not only with that sequence but one later on that is related to it — involves some of Grant Gustin’s best acting ever. It’s Grant at his finest. 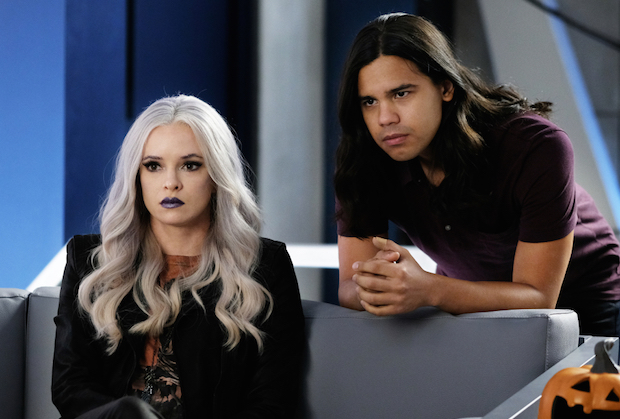 TVLINE | Give me a little something about when Cisco (who went to visit Atlantis) and Caitlin/Frost (who went with their mom to recuperate from an injury) eventually return.
Caitlin, because of COVID, came back sooner than expected [since Panabaker’s maternity leave ended during the pandemic]; that was a real blessing. You won’t have to wait long at all for Caitlin and Frost to return, and we actually added scenes to bring Frost in at least two to three episodes sooner than originally planned.

Same thing with Cisco. Let’s just say that he comes back wiser and with the skills and talents to help them defeat Eva.

TVLINE | After Eva, we’re heading into Graphic Novel 3. In addition to No. 4, might there also be a 5 this season?
There will be Graphic Novels No. 3 and 4, two just like last year. After Eva, look for two new Big Bads in their own Graphic Novels. 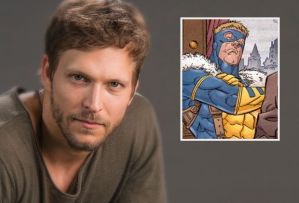 TVLINE | Might there be any overlap between Chillblaine and the Graphic Novel No. 4 villain?
It’s funny, we have finished our first couple of Chillblaine episodes, and I’m happy to report that they’re so great and so much fun that we may be adding more Chillblaine than we even anticipated. He may leak over into the fourth Graphic Novel, which was not one of the plans. He was just supposed to be a part of Graphic Novel No. 3, but I’m happy to report that Jon Cor (pictured) is doing an amazing job, and I think the fans are going to fall in love with him — a villain I hope they love to hate.

TVLINE | What are you plans for David Ramsey’s announced next visit, as Arrow‘s John Diggle?
[Laughs] Oh boy, that’s a spoiler. When we last saw Diggle, he had a situation at the end of Arrow he needed to deal with, so he arrives to help Team Flash in the back half of the season carrying the weight of that “problem.” The question is, how can he help Team Flash when he has got something even bigger on his mind? And that’s what the story is. 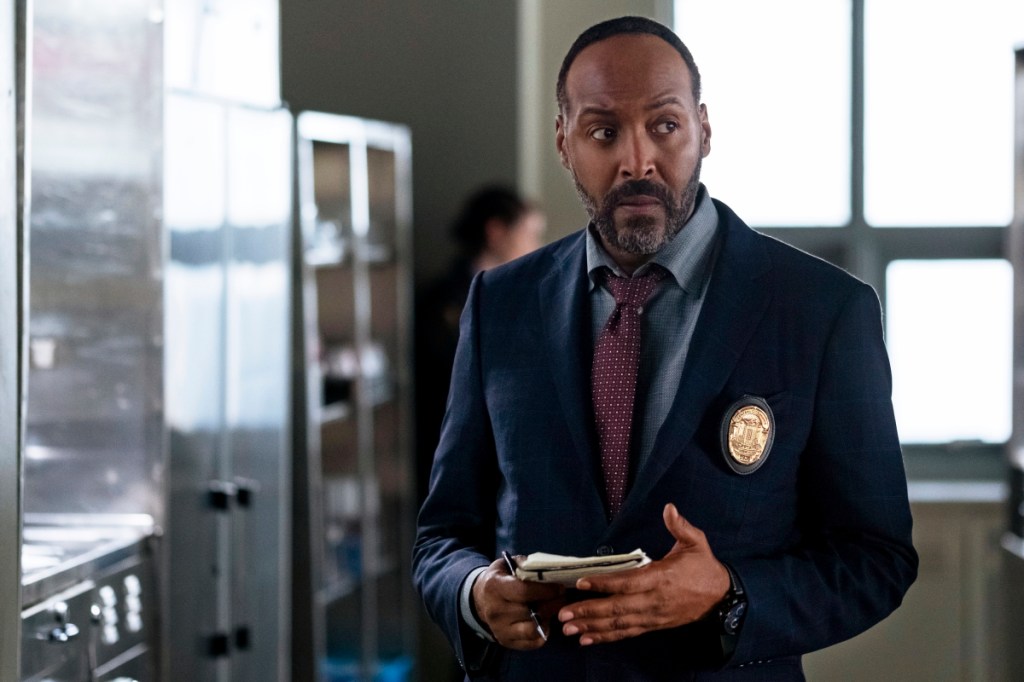 TVLINE | I saw your quotes over the hiatus about Joe West’s upcoming storyline inspired by recent “societal changes.” How tricky is it bringing a real-life topic like that into a show like The Flash?
It’s tricky. You have to walk a fine line between being honest with the audience about social justice issues while also remembering that this is family-oriented entertainment, so you can’t get too heavy. It has been tricky, but I think we found a good balance, and it helped us find what I think for Joe is his most interesting character journey yet. It’s going to take him to some very unexpected places, and Jesse [L. Martin] has risen to the challenge and is knocking it outta the park.