While Hollywood was handing out Golden Globes on Sunday, the American Idol judges were handing out golden tickets to Hollywood.

And if we’re talking about gold, no one glittered quite like the final singer of the night, 19-year-old Ronda Felton. After sharing her life story, a difficult upbringing of poverty and strife, she wiped away her tears of joy to deliver an unforgettable rendition of “One Night Only” from the musical Dreamgirls.

“I was doing really well until you came in and did something that no one has done tonight, which is touch me to the point of making me cry,” Lionel Richie told her. “Every once in a while, life happens and you figure, ‘How do I get out of this situation?’ God provides a crack in the wall, just a crack. That crack is just enough for you to get through … and my dear, you just found that crack.” (I will neither confirm nor deny that I giggled a little bit every time Richie said the word “crack.”)

Felton was so excited, she rushed to bring her mother into the room so they could hear the good news together. And at mom’s request, the whole gang celebrated with a special performance of The Commodores’ “Zoom,” a song I now know exists.

Read on for other memorable (and successful) auditions from Week 3… 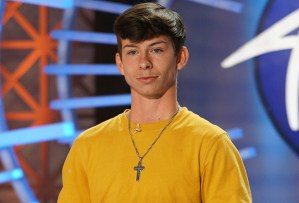 CECIL RAY, 20 | The constant hair-flipping drove me insane, and I could definitely go the rest of my life without ever hearing another Morgan Wallen song again, but it was impossible to hate on the night’s first audition. And I actually appreciated this new dad’s refreshingly unpolished vibe, something the judges were quick to correct.

SAMANTHA SHARPE, 25 | Before auditioning on her own, Sharpe performed “Into the Unknown” from Frozen with her musical family (aka The Sharpe Singers). I was fully prepared to cringe, but I can admit when I’m wrong — they were incredible. La Roux’s “Bulletproof” was also an excellent choice for Sharpe’s solo performance, and not just because I’ll take any excuse to revisit that gloriously simple era known as 2009.

GRAHAM DEFRANCO, 27 | Speaking of excellent song choices, DeFranco — the first person on his family to earn a black belt in the recorder — treated us to a lovely rendition of “Part One” by Band of Horses. The judges’ only critique was that he should be pursuing his musical dreams rather than flying planes for a living. (And am I the only one who sensed a John Mayer-ish quality in his voice?)

MARY JO YOUNG, 19 | Outside of videos for TikTok and Twitter, Young said she’s never performed before, but you’d never know it once she opened her mouth. Her delivery of Tate McRae’s “You Broke Me First” was so good, the judges made her bring her mom into the room so she could finally experience her daughter sing live.

CHRISTIAN MCCGUCKIAN, 20 | Maybe I’m channeling Simon Cowell’s residual energy, but I don’t think I would have sent this nice young woman through to the next round. Her backstory about a near-fatal car accident was touching, but that performance was flat. I think I would have given her the old “You’re almost there, you just need some time to grow” speech. Let’s see if she proves me wrong in Hollywood.

ALANIS SOPHIA, 19 | With her childhood American Idol toy microphone in hand, this powerhouse belter did her namesake (Alanis Morissette) proud, blowing the judges away with a killer performance of Demi Lovato’s “Anyone.” This was a slam dunk from the start, and not just because Luke Bryan sat through the entire audition with his jaw on the table.

ERIKA PERRY, 26 | No lie, I was not expecting this audition to have a happy ending. From the moment Perry appeared on screen — rocking those lucite heels and throwing herself at Ryan Seacrest (aka her “soulmate”) — I was sure she was just another time-filling wackadoodle. Her slinky take on Katy Perry’s “ET” was enjoyable, albeit weird, so the judges gave her a second chance. “No gimmicks” was her only instruction, which she successfully took to heart. Here’s hoping she also took those “anxiety poops” she mentioned.

HUNTER METTS, 22 | Would you quit your job at Disney so your brother could audition for American Idol without a conflict of interest? Because that’s exactly what Metts’ sister did, and it paid off with a golden ticket. On the surface, Metts totally fits the guitar-dude aesthetic that has served previous Idol contestants well, but as he performed Kaleo’s “All the Pretty Girls,” I couldn’t help but sense that there’s more to him than meets the eye. We’ll find out in Hollywood!

A few other singers were also sent through to Hollywood — Xavier Washington, a 22-year-old college senior with gorgeous runs and a stunning falsetto; Celeste Butler, 23, who was singing on a cruise ship right before the pandemic hit; a 20-year-old guitar strummer known simply as Dzaki; and, of course, 25-year-old Timmy Skelly, who performed a duet with his mom — but we didn’t get to spend as much time with them as the other contestants.

Which of this week’s Hollywood-bound contestants have your attention? Vote in our poll below (choose as many as you’d like!), then drop a comment with your thoughts.