Warning: The following contains spoilers for Ginny & Georgia Episode 8. Proceed at your own risk!

It’s not very often that you see two biracial characters of different ethnicities on a TV series, arguing about which one of them has it worst. But on Netflix’s new dramedy Ginny & Georgia, that scenario is explored when half-Black Ginny (played by Raising Dion‘s Antonia Gentry) and her half-Taiwanese boyfriend Hunter (Mason Temple) have a powerful and explosive argument in Episode 8. During the fight, which Hunter dubs “the Oppression Olympics,” the two lob hurtful racial stereotypes at each other and argue that the other is closer to white than oppressed. And many of the painful remarks during that specific scene were crafted by their portrayers, alongside the show’s executive producers. (The full episode is credited to staff writers Mike Gauyo and Briana Belser.)

Once production on the series began, Gentry and Temple (who is half-Taiwanese like his character) were invited to contribute their thoughts and share their own real-life experiences. “We sat with them for two separate sessions and just talked with them. They really wrote that scene,” creator Sarah Lampert tells TVLine. Then while shooting the argument, “we all felt on that day how powerful that was. We were all crying in video village. Toni was crying. Mason was crying. Everyone just felt like it was something really important happening. I think it was really important to let Toni and Mason craft it.”

Below, Gentry talks about exploring Ginny’s racial identity, and how she and Temple wrote each other’s dialogue. 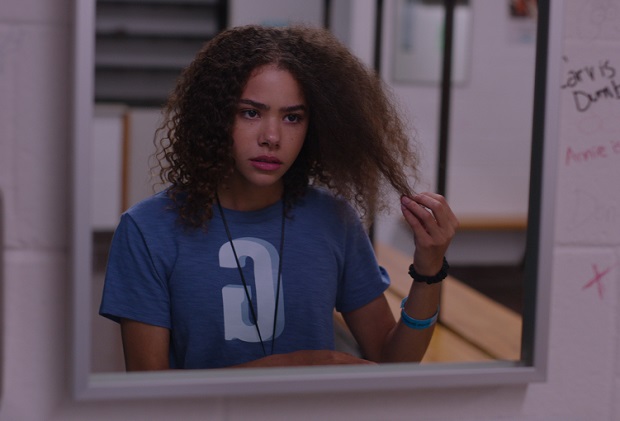 TVLINE | Sarah told me that Ginny was always written as a biracial character. What did it mean to you to see that in the script when you first got it, and as you were filming the season, to see that aspect of the character explored so thoughtfully and deeply?
I felt like, for the first time, I had a voice that was actually being heard. It was really cathartic for me to come back to playing this age and sort of reliving a lot of similar scenarios that I had grown up experiencing… Anya Adams is also a biracial woman, [and] she’s the director of Episodes 1 and 2. For the showrunners and the show creator, Deb [J. Fisher] and Sarah, to really give me the floor and ask me [and Mason], genuinely, “What was it like growing up, and what have you experienced?” it was honestly jaw-dropping. I really did not understand what was happening. [Laughs] I was like, “I can’t believe you’re actually asking me what it was like to grow up this way, and it’s about to be in a TV show on Netflix, and millions of other people can watch it.” Like, it didn’t make any sense. I’m so used to not having, really, a voice, just because there aren’t that many… I mean, we’re seeing it more and more now, of course, as the world is changing. It’s more diverse, it’s getting smaller and smaller. But there wasn’t really a precedent set for, especially the biracial experience and particularly for me, being half-Black, half-white in America. It’s not uncommon, but we never really have a platform to speak from, because it’s such a unique experience. To be given that platform was an amazing thing that I’ll always cherish [and] never take for granted.

TVLINE | One of the moments that stood out the most for me was the “Oppression Olympics” fight between Hunter and Ginny. Sarah and Deb mentioned that you and Mason actually helped write that scene. Can you talk about that process and what you wanted to add to it?
First of all, neither of us could really believe it. [Laughs] Mason and I were invited to dinner with Sarah, and we just sat on her couch and talked about our experiences. Even though he’s male and he’s half-Taiwanese, half-Canadian, there are a lot of things that we bonded over in terms of things that we experienced growing up and being in school. And also, new things that we relayed to each other. Me being Black and female, and him being Asian and male, have their own separate host of stereotypes and labelings. So we really learned a lot from each other’s experiences, and immediately, we just trusted each other so much.

I remember that day on set, it was just so quiet, and the director of Episode 8, Aleysa [Young], she is also Asian, and she related really strongly to it, too. Us doing that scene and having to say things to each other that were hurtful, but were words that we’d heard growing up all our lives, from different people, strangers and friends alike, family members, it was so emotional. We got through the scene, and at the end, we just hugged each other for a solid minute, just to say, “It’s OK, I’m here for you. I see you.” That was, genuinely, a scene straight from our experiences. 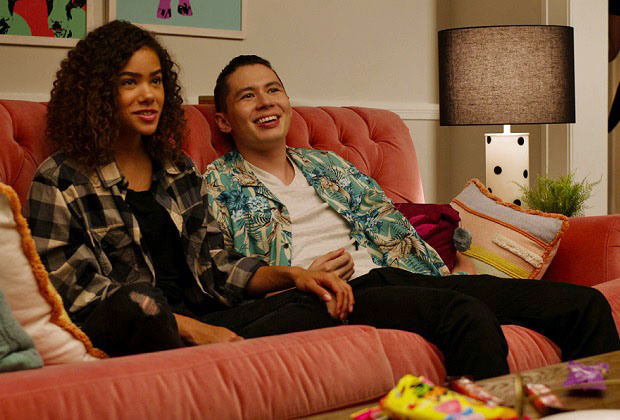 “Oppression Olympics,” that was Mason’s term for it, and I think it accurately describes [how] when you’re frustrated and you’ve gone through so much, there can be this kind of competitiveness of, “Well, I’ve gone through this, and so you don’t understand. But you’ve also gone through something, and I don’t understand,” and that can be really frustrating. It’s heartbreaking for these two characters to go through that, because you know that they’re there for each other and that they love each other, but sometimes, these things are just such difficult conversations. So I feel like it’s really valuable [for that] to be in the show.

TVLINE | Were there specific lines of dialogue that you remember contributing? Or was it just that you shared your experiences and ideas with Sarah?
It was actually interesting, because Hunter points out to Ginny, “Oh, I haven’t seen you throw back jerk chicken,” for example. My mother was born and raised in Jamaica, but I don’t have strong connections to my Jamaican heritage. I have Jamaican family, and I’m always around them, but I never really felt like I could really identify as a part of that culture, even though it’s a part of my heritage. So that line, for example, was something that was directed toward me in a way that, yeah, these are things that people have brought up to me before in the past, kind of bizarre, where white people would tell me, “You’re not actually Black, you’re Jamaican,” as though that makes any sense at all. So, somehow, my mother being from the Caribbean and not being from America is, in their intonation, better or worse, whichever way it fits for them, than being a Black American.

Those kinds of lines that were stereotypes that Hunter throws back at Ginny were direct lines that we contributed in terms of our own experiences. The whole thing about him [not] speaking Mandarin and his spiel about Taiwanese culture and what it’s like being part-Taiwanese, that was all [Mason]. It was really collaborative in that regard in terms of experience.

TVLINE | So you basically wrote each other’s dialogue, then, not your own?
Yeah, that’s what I’m trying to say. It was weird. The things that I say to him, I wouldn’t know to say to him because I hadn’t experienced that. So he had to give me the material to throw at him, and then I had to give him the material to throw at me, and that’s part of what made it so emotional for us.