Dickinson‘s Season 2 finale is titled “You Cannot Put a Fire Out”… and we’re still feeling the heat.

The town’s church burned down in Friday’s finale, and that wasn’t even the hottest thing we saw in the pivotal half-hour, because after a season of estrangement, Emily and Sue came back together in a volatile, emotionally raw scene. A furious Emily ordered Sue out of her life, and when she accused Sue of not having feelings anymore, Sue admitted she’s right: “The only time I feel things is when I’m with you.” She tried to tell Emily she loves her, but Emily wouldn’t hear it, calling Sue a liar and even shoving her up against the door by her neck. But Sue insisted that she never felt anything for Sam: “The only true thing I will ever feel is my love for you.” The two finally collapsed into each other, kissing passionately and later undressing each other during an intimate dinner for two and taking a sensual bath together.

“Acting that scene with Hailee [Steinfeld] was one of the best days of my life,” Ella Hunt, who plays Sue on the Apple TV+ dramedy, tells TVLine, adding that series creator Alena Smith “wrote such an extraordinary climax for our relationship.” But “love doesn’t end in a happy ending,” she warns. “Yes, Emily and Sue sort of have a happy ending at the end of Season 2, but then they’re going to have to start dealing with the complexities of having committed themselves to each other.” (To start with: What about Sue’s husband — and Emily’s brother — Austin?)

In a later scene, a post-coital Emily and Sue shared a cuddle, and Sue vowed: “I will never let go of you again.” In those final scenes, “you’re seeing the real Sue come back,” Smith says, and “once she comes back, she’s not leaving again… She will remain committed to Emily for the rest of her life.” The chaos of Season 2 was “so intense that it almost causes Emily to push Sue out of her life forever,” she notes. “And I think if that had happened for Sue, she would’ve died. I don’t think that she could’ve survived without Emily. So once she is brought to that brink and then brought back, I don’t think Sue is ever going to let Emily go again.” (We’ll get to find out, too: Dickinson has already been renewed for Season 3 by Apple TV+.) 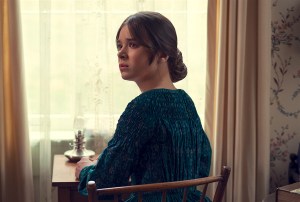 Emily also confessed to Sue that she only writes her poems for Sue, and all she ever wanted was to have Sue’s love. (She doesn’t even feel like dying, for once!) As star Hailee Steinfeld (Emily) puts it, “she’s become so consumed by this idea of fame and attention when she realizes, ‘I was content to begin with. And in that state, I was sharing my poems with the one person that loves them and loves me, and is honest with me about them.'” After her misadventure with Sam Bowles, “Emily learns to appreciate the people that are honest with her. And once she realizes that Sue is only looking out for her, it’s really a beautiful moment when we see them come back together. They really always do find each other, don’t they?”

Alright, Dickinson fans, grab your pen and inkwell and chime in: Give the finale a grade in our poll, and hit the comments to share your thoughts (and Season 3 predictions).