The Amazon Prime limited series, which is based on Colton Whitehead’s Pulitzer Prize-winning novel of the same name, will premiere Friday, May 14, the streamer has announced. The highly anticipated adaptation follows Cora (played by South African newcomer Thuso Mbedu), an enslaved young Black woman who is an outcast on the Georgia cotton plantation where she lives. When she hears about an escape network that could free her from the forced bondage she has endured for far too long, Cora decides to risk her life and break free — only to discover it is not a symbolic metaphor. Instead, this Underground Railroad is an actual railroad full of conductors and engineers, operating a secret network of tunnels and tracks just below the soil under her feet. 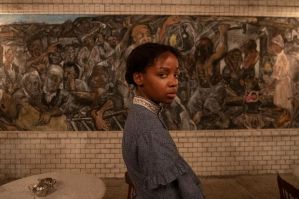 During her journey to emancipation, Cora is doggedly chased by Ridgeway (Joel Edgerton, The Great Gatsby), a slave catcher obsessed with bringing her back to the plantation she escaped. Ridgeway’s fixation with Cora is heightened because her mother Mabel (Sheila Atim) is the only enslaved escapee he never detained. As Cora deals with Mabel’s legacy as well as her own fight for freedom, she must steer clear of the dangers that surround her, including the ever-approaching Ridgeway.

Jenkins (Moonlight) wrote, directed and showruns all 10 episodes of The Underground Railroad, and recently teased the series with a reverse-motion trailer. Amazon Prime, meanwhile, recently released a less trippy take (embedded below).

“Going back to The Intuitionist, Colson’s writing has always defied convention, and The Underground Railroad is no different,” Jenkins said in a statement years ago. “It’s a groundbreaking work that pays respect to our nation’s history while using the form to explore it in a thoughtful and original way. Preserving the sweep and grandeur of a story like this requires bold, innovative thinking, and in Amazon, we’ve found a partner whose reverence for storytelling and freeness of form is wholly in line with our vision.”