Different colored Chucks, a pair of overalls and a bandana or two is all the beloved title character in Peacock’s Punky Brewster revival needed to get back in touch with the rainbow-tinted-sunshine kind of girl she used to be.

That’s because this Punky (reprised by Soleil Moon Frye) is all grown up as a divorced mother of three who put so much into her marriage to onetime husband Travis (Freddie Prinze Jr.) that she lost touch with the playfulness that made her so gosh darn winsome. While that’s a little hard to believe, because her eldest Hannah (No Good Nick‘s Lauren Lindsey Donzis) goes above and beyond to be the surrogate adult/default babysitter in her mom and dad’s lives, being an immature adult and being a fun one aren’t technically the same thing.

Besides, as shown in the pilot, Punky is a former photojournalist who owns her own photography studio (just as her late foster father Henry did), and she has to take care of Hannah and sons Diego (Noah Cottrell) and Daniel (Oliver De Los Santos) more often than not because she’s their mom, and that’s what good moms do. She also walks the family dog (shouldn’t the kids do that?), a cute Golden Retriever named Brandy in honor of Punky’s childhood dog, Brandon. Punky still has feelings for Travis and he still has feelings for her, and that’s fun to watch in large part because Frye and Prinze Jr., have tangible chemistry. And Travis makes chocolate chip pancakes, which is always hard to resist.

There’s also the sweet bestie energy Punky and Cherie (an ageless Cherie Johnson) share, with the latter overseeing a foster child placement service. While it would’ve been great to hear Cherie talk about Betty, the deceased grandmother who raised her — hey writers, give this woman some cultural roots, please — it’s fun to see Punky and Cherie give hugs of support and kick back and drink together. And it is a thoughtful character layer to make Cherie a lesbian with a wonderful girlfriend named Lauren (Fringe‘s Jasika Nicole). (Audiences will meet her in future episodes, with Episode 6 serving as the show’s strongest and most thoughtful installment in the way it addresses sexuality and gender. So, there’s also that.) 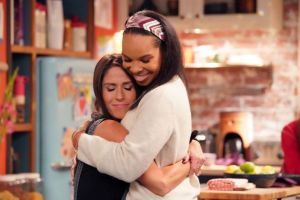 Being the awesome best friend that she is, Cherie indirectly introduces Punky to Izzy (Quinn Copeland), a ridiculously adorable urchin who acts a lot like Punky did as a kid and whose mom also abandoned her. After a series of sitcom mishaps and missteps, Punky of course realizes that she wants to adopt Izzy. And Travis, Hannah, Diego and Daniel also realize they love little Izzy, too, and want her to stick around as well.

Is the new Punky Brewster sometimes a little too bubbly for its own multi-camera, studio audience laugh-track good? You bet your sweet “holy macanoli” it is, and the kids are Disney-level snarky, which grates on the nerves a bit. But in a cynical world where this pandemic has parents spending an unnatural amount of time with their offspring, it’s nice to know that moms and dads can watch this family comedy, as well, a family.

Oh, and the possibility of Punky meeting her biological mother, who reached out to her at the end of the installment, is an exciting touch if only to see which actress could play her.

What do you think of grown-up Punky Brewster?