It’s not a great sign when watching a new show just makes you think about other, better shows. That’s the case with Netflix’s Ginny & Georgia — premiering Wednesday, Feb. 24 on the streamer; I’ve seen five of the ten episodes — a mildly cute, kind of boring new dramedy that wears its pop-culture inspirations proudly on its sleeve. Maybe a little too proudly: It feels like a show created by an algorithm, or conjured up from a TV writer’s vision board. It borrows liberally from past shows, primarily Gilmore Girls and Dead to Me, but the influences don’t all blend together. We can see the seams.

The story follows 15-year-old Ginny (Raising Dion‘s Antonia Gentry), a brainy introvert often outshined by her vivacious 30-year-old mom Georgia (Batwoman‘s Brianne Howey), who shamelessly uses her ample sex appeal to get what she wants. After Ginny’s stepfather dies in a suspicious “accident,” Georgia snatches the inheritance away from his fuming relatives and moves her kids to a quaint Massachusetts town for a fresh start. (Ginny’s tired of fresh starts, though: To her, the town “looks like Paul Revere boned a pumpkin spice latte.”) And if this setup all sounds a bit Gilmore Girls to you, you’re not alone. In fact, Georgia comes right out and says it: “We’re like the Gilmore Girls, but with bigger boobs.” 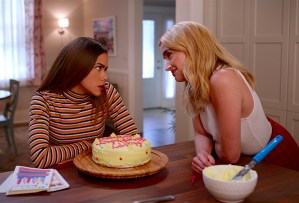 But the connection is only superficial: The writing from first-time creator Sarah Lampert and showrunner Debra J. Fisher doesn’t approach Amy Sherman-Palladino’s caliber. Too often, they settle for a witty pop-culture reference where meaningful dialogue should be. (The first episode alone name-checks everything from John Hughes and Pretty Woman to Harry Potter and Vanderpump Rules.) A pastiche of pop-culture touchstones doesn’t add up to a compelling TV series, though, and the more I watched Ginny & Georgia, the more hollow it felt.

There’s a layer of crime-drama intrigue here, too, surrounding Georgia’s checkered past and the circumstances of her late husband’s demise. (Both mother and daughter tense up when they see a cop approaching.) Like Dead to Me, another Netflix mystery set amid suburban bliss, Ginny & Georgia reveals another small piece of the puzzle each week to keep you interested. At least that’s the idea, but the flashbacks are a bit Crime Drama 101 and aren’t nearly as gripping as the show thinks they are.

The end result is a little too adult for teens, and a little too teen-y for adults. Gentry and Howey are both quite good here, and they quickly establish a combative but affectionate rapport, but they’re almost on two separate shows. (For a mother-daughter show, Ginny and Georgia don’t actually share many scenes together.) The teen side is decidedly the more successful of the two, poignantly capturing the crushing heartbreak of an unreturned text or a rude comment from a stranger online. Ginny’s new BFF Max (Sara Waisglass) is an over-caffeinated font of #TeenLife slang — hundo P! — but Ginny’s new crush Marcus (Felix Mallard), the bad-boy stoner next door, is a walking cliché. (Does he have a motorcycle? Of course he does!) 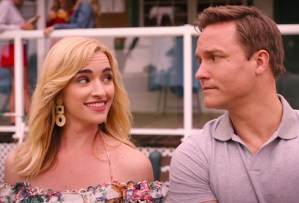 Ginny & Georgia seems to have something interesting to say about female beauty standards and the suffocating constrictions of the patriarchy — Ginny calls out the AP English curriculum for being too white and too male — but it gets jumbled among all the other things the show is trying to be. Ginny and her mom both end up in lukewarm love triangles, with Georgia eyeing the town’s mayor (played by Friday Night Lights‘ Scott Porter) as well as bearded coffee shop owner Joe (Shadowhunters‘ Raymond Ablack). It all makes for an uncomfortable mix of gentle small-town shenanigans and gritty crime twists, and neither of the two are sharp enough to really hook you. Ultimately, Ginny & Georgia feels like it was made to fill a space in the “Because You Watched” row on Netflix… and for a streamer intent on keeping you binge-watching no matter what, maybe that’s enough.

THE TVLINE BOTTOM LINE: Netflix’s Ginny & Georgia is mildly cute, but it tries to do too much and mostly reminds you of other, better shows.