Kevin and Beth aren’t the only potential pairing being teased by The Crew.

In the Season 1 finale of Kevin James’ Netflix sitcom, NASCAR speedster Jake (played by Bridgerton‘s Freddie Stroma) shared a kiss with his new boss Catherine (Jillian Mueller), who had spent the previous nine episodes determined to ditch Bobby Spencer’s oafish driver. Suffice it to say, the passionate embrace came as something of a shock — even to the actors.

“Jillian and I had no idea [the kiss was coming],” Stroma tells TVLine. “We were shooting [Season 1], then COVID happened. We had a long break, then we came back to shoot during COVID. 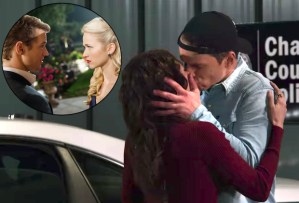 “Doing a kiss in the middle of [a pandemic] is pretty difficult,” he explains, so the Powers That Be came up with a creative solution. “They got my wife [UnREAL costar Johanna Braddy], who was with me because we were quarantined together. They put a wig on her and we ended up kissing. So that’s how that happened. And story-wise, I think [the potential romance] is fun because Catherine and Jake are just so different. I hope there will be a storyline of just her insane embarrassment of what she’s done.”

Mueller was also surprised. “I didn’t know until two, maybe three weeks before we got to the finale,” she says. “But I liked that they did that, because when you go back to Episode 1, you don’t think that’s where things are going. And as far as going into another season, I think it’s just going to be Catherine in a spiral.”

Asked if a potential Jake and Catherine relationship may expose a different, less hardened version of Catherine, Mueller says, “Absolutely, there would be a whole other side to Catherine that we would explore, making her less of a stick in the mud.”

What did you think of The Crew‘s finale — and Season 1 overall? Can you get behind a potential Jake/Catherine romance? Weigh in via the following polls, then drop a comment with your full review.