The search for that elusive Jack Napier painting — which could be the key to finding Kate Kane — continues this week, with Batwoman‘s eponymous hero teaming up with an unlikely source to pull off a tricky heist.

“Gore on Canvas” kicks off in a seedy alleyway as Jacob Kane meets with a promising lead on that mysterious painting Safiyah doesn’t want him to get ahold of. The source tells him the painting is being held by a group known as The Collective, which includes some of the Crows’ biggest clients. Before Jacob can press further, one of Safiyah’s assassins murders the informant, but is then quickly captured by Batwoman.

Jacob should have known better than to demand that Batwoman turn him over — she promptly refuses and points him to the graffiti on the wall, which encapsulates her feelings about him and his organization: ACAB, which stands for All Crows Are Bastards. They may have worked together last week to save a missing boy from the Candy Lady, but these two are definitely not friends. 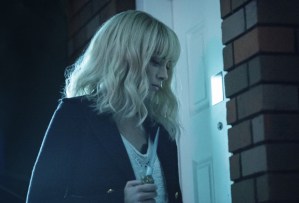 The next morning finds Ryan and Angelique enjoying breakfast together after finally reconnecting. Angelique offers matching gold bracelets as her way of paying Ryan back for the 18 months she spent in jail for trying to protect her by taking her drug stash. She then calls attention to Ryan’s kryptonite wound, which Ryan brushes off as not a big deal before going to Mary for antibiotics. Afraid of her secret getting out, Ryan asks Mary not to tell Luke since he already questions everything she does. Cut to the next scene, where Luke is doing exactly that. He’s not sold on Ryan’s plan to keep the assassin captive until he breaks, since time is running out and they need to find Coriana before Alice gets to Ocean — the man Safiyah wants dead in exchange for Kate Kane.

Meanwhile, Jacob isn’t too worried about Batwoman holding Safiyah’s assassin captive since he has his own lead in Evan Blake, an old friend of Kate’s who is a fixture in the Gotham arts scene and a likely member of The Collective. When Evan refuses to help them, Sophie suggests they enlist Batwoman’s help. In a secret meeting, Sophie tries to convince Batwoman that not all Crows are bad, that some are just trying to make a difference. However, Batwoman doesn’t see it that way, so Sophie’s forced to make a deal: She’ll give the caped hero everything the Crows have on Safiyah and Coriana if Batwoman gives her access to the assassin. Unbeknownst to them, a villain by the name of Wolf Spider has been listening in on their conversation.

Ryan relays Sophie’s offer to the Bat Team, remaining fully opposed to working with the Crows. When Mary suggests that it wouldn’t be so bad if they’re working with Sophie, Ryan reminds her that Sophie is the one constantly pulling her in for questioning for any which reason. With tensions rising, Ryan goes to blow off steam outside, and Luke follows her. In a sweet moment, Luke tries to bond with Ryan over their Crows horror stories. 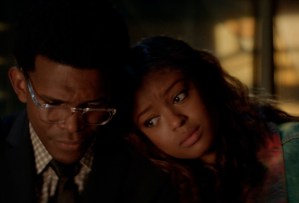 Ryan reveals the awful details of the night she was arrested: Angelique was having a bad trip, and Ryan took her drugs in the hopes that it would straighten her out. Upset and crying while walking outside, she passed two officers, and one of them told her to smile. Despite her efforts to walk away, the officers persisted with the harassment until she pushed back. They then arrested her, found the drugs and the rest is history. Luke admits that he despises the Crows because they murdered his father, making the point that the Bat Team needs the Crows’ help regardless of their feelings. Ryan agrees, and they team up with Sophie and Jacob to interrogate Safiyah’s assassin.

It’s a good move, since the trained killer lets it slip that the painting and Coriana are linked — the painting may actually be a map to the mysterious island. But before they can glean more information, the assassin kills himself with a cyanide capsule. Not a big deal, since Sophie learns that The Collective is hosting a special exhibition to auction off the infamous Napier painting. Batwoman goes along with the plan and, with help from Mary, dresses up for the occasion. She’s almost thrown out of the event by Evan until Angelique vets her. It turns out that Angelique has been providing party drugs for The Collective, but doesn’t partake and has been four months sober.

Elsewhere, Alice is still confused about her sudden memories of Ocean since she’s never met him before. She tracks him down at a bar and gets him to open up about the “magical” place he comes from, also known as Coriana. After confirming they’ve never met, she goes through with her plan to kill him, but Ocean is one step ahead of her. He knocks her out, and she wakes up tied to a chair. Ocean, who reveals that he used to call Safiyah “sister” (no blood relation), is baffled as to why Alice would get drunk with him before trying to kill him since she had ample opportunity to get the job done a different way.  But Alice needed to talk to him to find more answers. It’s not long before they realize they were both in Coriana five years ago and Safiyah may have erased their memories. Despite not trusting her, Ocean works with Alice to kill the trio of assassins outside the motel room, and they escape together.

At the auction, Ryan finds the painting and changes into the bat suit to steal it. Before she can nab the Napier piece, however, it’s stolen by Wolf Spider, who masterfully evades both Batwoman and the Crows. Batwoman attempts to swing from a chain to go after the mysterious villain, but is weakened by her wound and falls to the ground. On foot, Wolf Spider continues running from the Crows, who chase him down via an SUV. The Crows hit him with their car, take the painting and leave an injured Wolf Spider to die. However, Batwoman finds him (uncovering his mask to reveal Evan underneath) and takes him to Mary’s clinic, which saves his life. 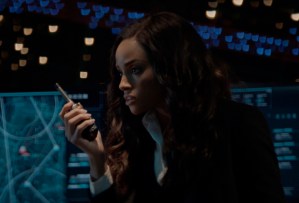 Ryan is upset that she listened to Luke about working with the Crows, especially after this latest incident, and puts her foot down. She will no longer ignore the bad feeling in her gut, and the other two better fall in line. In an attempt to repair their temporary partnership, Sophie brings Ryan the badges of the Crows responsible for the hit-and-run. That’s not enough for Batwoman, who wants to burn the whole institution down. Sophie insists she’s fighting to change the culture of the Crows, and Batwoman refuses to partner with her again until she’s no long a part of the corrupt organization.

Back at the clinic, Mary reveals to a recovering Evan that the stolen Napier painting was a fake. The real one, which could be the key to finding Kate, is somewhere out there. Meanwhile, Alice and Ocean make their getaway, and Alice recalls another memory: They were once lovers.  Before she can process, Ocean drops one final surprise: He has the original Napier painting.

Holy reveals, Batwoman! What did you all think of this week’s episode? Sound off in the comments below.