Kicking off the Modern Family-esque episode “Breaking the Fourth Wall,” Wanda shrugs to an off-camera interviewer, the morning after Halloween, “We’ve all been there, expanding the borders of a false world we created.” But more is amiss than she knows, because as twins Billy and Tommy scamper upstairs to reveal, their world is kind of glitching out. Solid matter (e.g. video game controllers, lamps) is rewriting itself for fleeting instances. Wanda tells the interview it’s “just a case of the Mondays,” before the Office/Happy Endings-like opening credits roll.

Outside the no-longer-expanding Hex, S.W.O.R.D. boss Hayward and Agent Rodriguez realize they are lucky Wanda “pumped the brakes,” though their “WandaVision” signal has been lost. Regardless, Hayward declares, “We launch today” whatever insidious plan he has on tap. Meanwhile, Jimmy, riding with Monica safe outside the Hex, processes the email/docs Darcy had sent, about how Project CATARACT is about bringing Vision back online, as a sentient weapon. They meet up with Dr. Goodner, who unveils the heavily armored rover they have outfitted to bust through the Hex. Monica notes that her mother would have appreciated Goodner’s loyalty, to which the scientist says, “She’s not the only one we’re loyal to” — referencing Captain Marvel? —  triggering another of those conflicted looks from Monica. 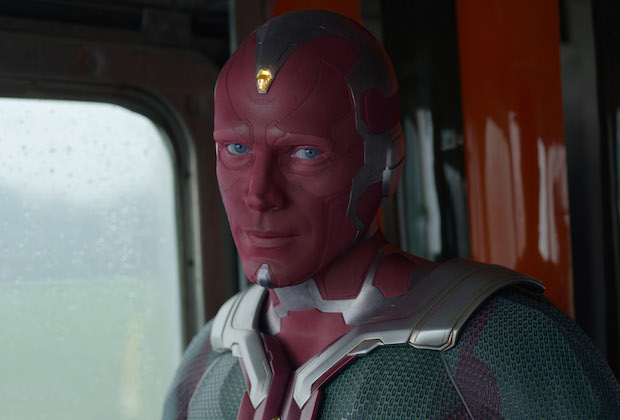 Over at the Hex-created Westview circus, Vision is mistaken for a new clown, and told to meet up with the “escape artist” — meaning Darcy, whose handcuffs have transformed into chains that she wriggles out of. Darcy is unaware of her true self until an impatient Vision “unlocks” her personality, and they flee in an appropriated funnel cake truck. During their drive, Darcy gives Vision the Reader’s Digest version of his origin story, and how he died, twice, in an attempt to save the world (or half of it). Their drive, alas, is waylaid again and again by a red light, construction work, and then a line of schoolkids. As Vision observes to the off-camera interviewer, someone keeps throwing impediments in the way of him getting home. Eventually, at episode’s end, Vision realizes he is wasting time with his “interviews,” and flies off, leaving Darcy behind in the blocked truck.

Back at Wanda’s home, Billy and Tommy ask their mom about Uncle Pietro’s comment about “rekilling Dad,” and she urges the moppets not to believe a word Pietro says, adding, “he’s not your uncle.” Wanda admits to the twins that she doesn’t have all of the answers, and in fact she is starting to believe that “everything is meaningless.” Following that heavy confession, she tells the interviewer the kids will be fine; after all, “they inherited tough skin.” Agnes shows up “in the nick of time” to spirit the boys away and give their Mom some “me time.” As Wanda is left alone to observe more and more glitching throughout the house, we cut to a commercial for Nexus, an antidepressant that will help “anchor you back to reality, or the reality of your choice.” But don’t take the drug, it warns, “unless a doctor has cleared you to move on with your life.” (Note: Wiki tells me that in Marvel lore, the nexus is “a cross-dimensional gateway which provides a pathway to any and all possible realities.”)

Hanging out at Agnes’ house with her rabbit Senor Scratchy, Billy remarks that he likes it there, because it’s quiet. Because Agnes is quiet, “on the inside.” And that triggers an uneasy look from their host. 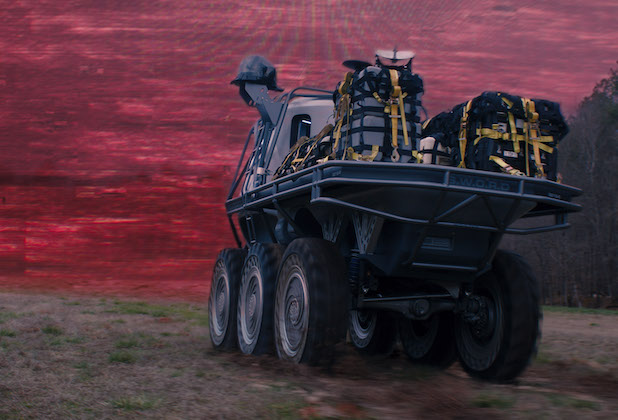 Meanwhile outside the hex, Monica dons a protective suit that lightly evokes her comic book/Photon/Captain Marvel look, and then climbs inside the rover to charge the Hex. But while Goodner assures Jimmy that the rover is up to the task, it hits the Hex with a clank, and then struggles to make a dent. Its density is being matched by the Hex, Goodner observes. Its integrity is being rewritten. The rover is about to flip –and possibly worse, the Hex is about to rewrite Monica’s DNA some more — when Jimmy urges Rambeu to get out. Monica does so, after which the Hex spits out the vehicle, whose front half is now a regular pickup truck. But Monica then shocks the others by shedding her helmet and making a run for the Hex by herself. As she hits and painfully squeezes herself through the barrier, we get a montage of dialogue from Captain Marvel, mainly about Young Monica giving her mom the OK to help Aunt Carol in outer space, saying she will be fine staying with grandma and Pop-Pop. We even hear from Nick Fury and Carol herself, the latter remarking on how when they were handing out little kids, Maria got the “toughest one.”

Once Monica breaks through, she is still in her supersuit, and her eyes are flickering a weird blue color, giving her a sort of x-ray vision of the artificial town, though she quickly shakes it off. Monica hoofs it to Wanda’s house and tries to explain to Wanda what Hayward’s mission/agenda for Vision is, but Wanda says she doesn’t want to hear these “lies” and levitates Monica up into the air. Monica breaks free of her “grasp” and makes a hero’s landing on the ground, then insists the only lies she ever told, “you put into my mouth.” Monica reiterates that Hayward will “burn everything to the ground to get what he wants,” adding, “Don’t let him make you the villain!” “Maybe I already am,” Wanda wonders. Monica explains how she too lost the person dearest to her, but she decided to not control that pain but accept it as part of her truth. Agnes shows up to interrupt and lead Wanda away, telling Monica that Wanda has “been through enough.”

Inside Agnes’ house, Wanda takes note of the half-eaten PBJs and the kiddie show on the TV, then asks where the twins are. Agnes says, “Probably playing in the basement.” Wanda ventures down to said cellar, where she finds sinister overgrowth and then a dungeon chamber outlined with symbols, and what looks to be a book of spells at its center.

“Wanda, Wanda, Wanda…,” Agnes tsk-tsks, entering the room with decidedly witchier hair. “Did you think you were the only magical girl in town?” She introduces herself as Agatha Harkness, who after snapping Wanda into some sort of trance, cues up her own “Agatha All Along” theme song and credits.

Who’s been messing with everything?
Who’s been pulling every evil string?
It’s been Agatha all along!

During said opening theme, we see how Agatha has been working her magic all along in moments from all of the preceding episodes, including at the talent show and when Pietro showed up with the wrong face. Oh, and she was also this episode’s off-camera interviewer.

“And I killed Sparky, too!” she gloats.

Luckily, as we see in a mid-credits bonus scene, Monica has quickly found and opened the cellar’s bulkhead door, and is about to go in… when Pietro comes up behind her. “Snoopers gonna snoop,” he ominously quips, before we resume the closing credits.

What did you think of Episode 7 of 9 and its big reveals?