Ginny & Georgia‘s central twosome are not Lorelai and Rory Gilmore. On the surface level, the new Netflix dramedy (premiering next Wednesday, Feb. 24) is bound to inspire comparisons to the WB/CW series Gilmore Girls, what with its central relationship being between a young thirtysomething mother and her teenage daughter. The show’s trailer even features a scene of Georgia (played by Batwoman‘s Brianne Howey) comparing herself and 15-year-old Ginny (Raising Dion‘s Antonia Gentry) to the beloved Gilmore duo. But that’s where the similarities between the two series begin and end, according to G&G‘s creative team.

While creator Sarah Lampert says she and showrunner Debra J. Fisher both “absolutely love” Gilmore Girls, they didn’t set out to craft a remake. “It was definitely an inspiration, but no more so than My So-Called Life, Buffy, Veronica Mars,” Lampert tells TVLine, adding that any stories that had “strong, dynamic, smart, funny, witty, powerful female characters just inspired what I wanted to write about.”

“I think that a relationship between a mother and a daughter, especially a teenage daughter, is one of the most complicated, nuanced, messy, push-and-pull relationships that you have in your life,” Lampert continues, “and I think there’s room for, honestly, hundreds of shows about them. Mother-and-daughter relationships are so interesting to me, and every Mother’s Day, I just send my mom an apology card for the high school years.” 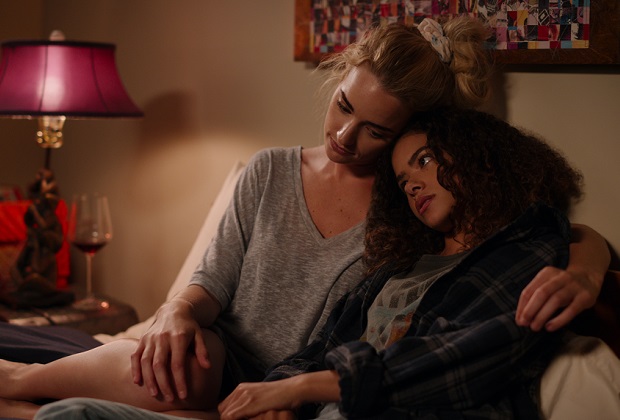 For those tuning in, expecting a Gilmore-esque show, Fisher believes they will discover that “Ginny & Georgia is its very own thing and stands on its own.”

For one, the series — which picks up with Georgia relocating her family to an idyllic New England town after the death of her husband — carries a dark and emotional undercurrent beneath its sunny surface, much like the effervescent and beautiful Georgia does. Some of Howey’s reference points for her character included “Fiona from Shameless, Nancy Botwin in Weeds, obviously Lorelai, and I think some of Georgia’s darkest moments, there’s maybe a little bit of Cersei [from Game of Thrones] in her,” the actress says. “Georgia is a force to be reckoned with. You don’t want to get on her bad side. It’s really fun to get to sort of straddle the lines between scary and charming.”

Georgia’s daughter Ginny, meanwhile, is a “really funny,” “vulnerable” and “awkward” high schooler who is “trying to figure out who she is, not only as a young woman, but as a young biracial woman,” Gentry says.

Questions of racial identity play heavy throughout the first season for the teen, who was always written to be biracial, Lampert notes. “There are three main relationships in the show: There’s Ginny, there’s Georgia, and then there’s the relationship between Ginny and Georgia,” Lampert explains. “By making Ginny biracial, there’s just a part of her lived experience that Georgia will never be able to understand, and that just further complicates their relationship.”

That mother-daughter bond is also tested by what Georgia and Ginny don’t tell one another. “Man, the secrets they keep from each other are so… It’s like the definition of complicated!” Gentry teases with a laugh.