After nearly two months of voice-modulated clues, Craig Robinson’s puns and the same snippet of Cameo’s “Word Up” played on a loop, The Masked Dancer has reached its first finale.

Heading into Wednesday’s conclusion, only Tulip, Cotton Candy and Sloth remained in the competition — and the dozens of clues offered to viewers since December have had me convinced it’s TikTok star Mackenzie Ziegler, Olympic gymnast Gabby Douglas and Dancing With the Stars alum Maks Chmerkovskiy under those respective costumes. But are those guesses accurate? And which judge ultimately racked up the season’s most correct predictions? Read on to find out:

TULIP | Ahead of Tulip’s final performance, we get a few more clues: the letter “E” with an angry face on it; makeup palettes; and a barrel labeled “X Ale,” which only further convinces judge Ken Jeong that Tulip is Lucy Hale. But after Tulip’s excellent, energetic routine set to Ava Max’s “Kings & Queens” — a true bop among bops — and her Word Up clue of “followers,” Ashley Tisdale doubles down on Ziegler, whom she guessed for the first time last week.

SLOTH | In his final clue package, Sloth shows up wearing a cowboy hat while dollar bills fall around him, and later he’s standing next to a street sign that reads “Jump Street.” But listen more closely, and you’ll hear the most devastating voiceover of the season: As Sloth tells us how lovely it’s been to remain anonymous under his costume, he adds, “People can’t dislike you if they can’t see you, right?” Aw, Sloth! Someone give this furry man a hug!

Sloth pulls off another technically perfect and highly funny performance — a jive this time — and he gives a Word Up clue of “magical.” But even though Chmerkovskiy was suggested by the judges last week, none of them seem to notice Sloth saying, “Let’s maximize the dancing and win this thing” in his package. (It would have been more impressive if he worked “Chmerkovskiy” into a sentence, but I’ll settle for “Maks.”) 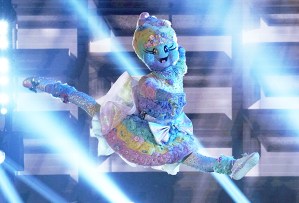 COTTON CANDY | Prior to Cotton Candy taking the stage, her clue package includes Cotton Candy’s hands clasped in prayer and a constellation repeating in the sky four times; later, her Word Up hint is “foundation.” But the biggest clue of ’em all is right there in the choreography, set to Kesha’s cover of “This Is Me” from The Greatest Showman: Cotton Candy does all sorts of impressive gymnastics across the stage, almost as if she’s screaming at the judges, “Stop! Guessing! Tara! Lipinski!” (But Brian Austin Green still remains convinced she’s a figure skater, so there’s no hope there.)

And now, the results! Tulip finishes in third place after the audience’s vote, and though the other judges make last-minute guesses of Liza Koshy, Lucy Hale and Sabrina Carpenter, it’s Tisdale who’s right in the end: Tulip is indeed Ziegler.

Sloth is then announced as the runner-up, and Green piggybacks on Abdul’s final guess of Chmerkovskiy, while Jeong predicts it’s Channing Tatum and Tisdale goes for Hugh Jackman. Green actually wants to guess the other Chmerkovskiy brother, Val, then realizes Val doesn’t have a child like Sloth does — and riding Abdul’s coattails pays off, as Sloth is revealed to be Maks Chmerkovskiy after all.

That makes Cotton Candy the first Masked Dancer winner — and despite Green and Jeong’s episode-long insistence that Cotton Candy is a figure skater (namely Lipinski and Michelle Kwan), Abdul makes her second correct guess of the finale (and fourth of the season!): Cotton Candy is Douglas, who now adds the Diamond Mask trophy to her already-impressive list of accomplishments.

Your turn! Were you glad to see Cotton Candy win it all? And whose identities did you guess correctly? Tell us in the comments below!