Before he was The Rock, he was just Dwayne Johnson… or, as the wrestler-turned-movie star’s autobiographical NBC sitcom Young Rock tells us, just “Dewey.”

Young Rock hops across decades to tell The Rock’s colorful life story, and Tuesday’s series premiere kicks off in the year 2032, with Johnson (playing himself) on the campaign trail running for president (!). In an interview with Randall Park — who’s ditched acting for journalism, it seems — The Rock hits back at claims he’s a Hollywood elitist, insisting that he’s had to work hard for everything he’s ever gotten in life. We flash back to him as a kid in Hawaii in 1982, known to his family as “Dewey” and cheering on his dad Rocky Johnson in the wrestling ring. His dad was a popular pro wrestler and drove a fancy car… but the family still lived out of cheap motel rooms. Rocky preached the value of “working the gimmick,” or putting on a confident front: “You work the gimmick hard enough, it’ll become real.” 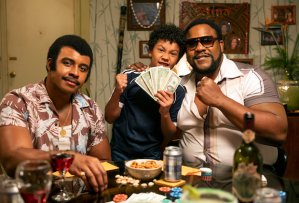 Young Dwayne (Adrian Groulx) grew up around famous wrestlers like the Junkyard Dog, the Iron Sheik and Andre the Giant, who brings a case of wine with him to a friendly card game. (When Dwayne dares to say that wrestling is “all fake anyway,” Andre picks him up like a rag doll and informs him: “You never use the F-word.”) Dad’s lesson of “working the gimmick” carried over to Dwayne’s teen years in 1987, when he shoplifted cool clothes — a Woody Woodpecker leather jacket! — to impress girls at school. (A huge blue stain left by an exploding security tag kind of gives the game away, though.) He’s also freakishly mature for a 15-year-old, his friend tells him: “You have a full mustache, and you’re bigger than a dad. You look like you work at an auto parts store.” 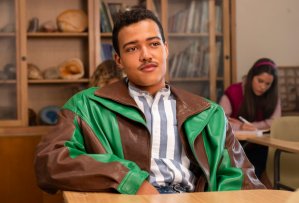 Teen Dwayne (Bradley Constant) really wants to show off for a girl named Karen, so he takes his life savings of $103 and buys a car from a scary customer at the pizzeria where he works. It’s a total beater that barely runs and only plays the opera station on the radio, but Dwayne’s determined to “work the gimmick.” He gets a surprise, though, when a homeless guy named Waffle wakes up in the car’s backseat. Waffle offers to buy beer for a party, and when he sees Dwayne changing into fancy clothes, says he reminds him of himself at that age, “trying to impress people who don’t matter.” What really matters is family and integrity, he adds, and that inspires Dwayne to ditch the party and use the car to pick up his mom at the bus stop. Dwayne promises to buy his mom a red Cadillac one day — and just as Waffle is about to dispense more wisdom, he up and dies in Dwayne’s backseat. (“Every time I pass a Waffle House, I always kiss my fingers and point to the sky,” Future Rock says.)

So Dwayne still works the gimmick, but “I learned to make the gimmick work for me,” he tells Randall. In 1990, he heads to the University of Miami to join their football team, a juggernaut stacked with pro talent. When he gets to the weight room, College Dwayne (Uli Latukefu) learns his dad has already been there to talk him up — and made up a lie about father and son appearing on a Wheaties box together. Dwayne tries and fails to keep the lie afloat, but he wins over his new teammates by pumping serious iron, breaking the freshman bench press record to the tune of Ozzy Osbourne’s “Crazy Train.” From then on, The Rock learned his version of working the gimmick: “Be me, but with the dial turned up to 11.” He promises to tell Randall more stories about his past in future episodes, too… like when he brought Andre the Giant to career day at school. (The premiere ends with a sweet title card in memory of Johnson’s dad Rocky, who died last year: “Thanks for the lessons, and I’ll see you down the road… I love you, Dad.”)

How’d you like what The Rock, um, cooked up on NBC? Give the Young Rock premiere a grade in our poll and tell us if you’ll keep watching, and then hit the comments to share your first impressions.