Sparks are flying on Netflix’s The Crew — and not the kind you see on the Daytona International Speedway.

The first episode of Kevin James’ NASCAR-themed sitcom establishes the potential pairing of Kevin and his longtime coworker Beth, played by Billions‘ Sarah Stiles. The table-setting comes in the very last scene, when a recently dumped Kevin posits that he’ll never meet that special someone as long as he’s dedicated to his job. He then suggests the chances of finding someone who cares as much about the racing circuit are slim to none, at which point Beth chimes in: “I don’t know about that,” she says. The camera then proceeds to stay on her long enough to infer that she may be that “special someone” for Kevin.

For James, whose characters on The King of Queens and Kevin Can Wait were romantically attached from the get-go, the will they/won’t they game is all new territory.

“I’ve always been married in my shows,” he tells TVLine. “It’s a different world for me to be dating, and possibly getting together with someone I work with.”

The relationship, even in its platonic state, is “great,” James says, thanks to his chemistry with Stiles. “They’re great friends, and you want to see them together. But is there more? Is there not more? It feels natural to me. It doesn’t feel forced [like it does on some other shows], where it’s like, ‘These two should be together,’ and you ask, ‘Why are they together at all?'”

So, what makes Kevin and Beth such a great pair?

“They’ve been working together for so long that they know each other as well as they know themselves — maybe even better,” Stiles says. “If they were both single years ago, maybe something would’ve happened. I get the feeling that over the years, they’ve gone back and forth with those sorts of feelings, but because they work together and because they’re such good friends, they wouldn’t want to mess any of that up.” 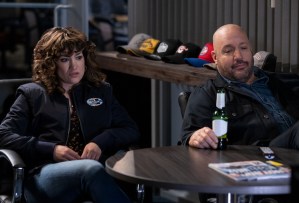 Could circumstances change? “I don’t think [a romantic relationship] is at the forefront of their minds,” Stiles says. “They care so much about this team. That’s what is driving them.”

Tell us: Are you a fan of the will they/won’t they storyline established in the closing minutes of the Netflix sitcom’s series premiere? Or were you hoping the show would be all racing, all the time? Grade the first episode via the following poll, then drop a comment with your full review. (As always, we ask that you refrain from spoiling subsequent episodes.)