It’s judgment day for Michael and his son Adam in the Your Honor finale… but did they come away unscathed?

As Sunday’s finale opens, Michael is looking for Adam and can’t find him. Elizabeth soon arrives to explain: She told Adam about his mom’s affair. (The kid is off alone, staring out at the water and looking at old photos of his mom.) Michael blows up at Elizabeth for insisting on telling the truth — a shaky concept on this show, we know — while Lee meets with Big Mo and tells her she knows Kofi wasn’t driving the car that killed Rocco. Big Mo doesn’t know who the driver actually was… but she does know Kofi picked up the car the day after the accident.

When Adam confronts Michael about the affair, Michael emphasizes how wonderful Adam’s mother was; she just made one mistake, he says… just like Adam did. Michael remembers that on their wedding day, his wife told him she was pregnant with Adam, and he hugged her so hard, he cracked one of her ribs. She didn’t say anything, though, because she didn’t want to spoil the day. “Was that a lie,” he asks, “or was that love?” (Hmmm.) 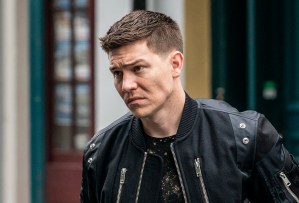 Back in the courtroom, Carlo testifies that he was devastated by the death of his brother Rocco and recounts how Kofi came into his prison cell and shut the door “with murder in his eyes.” He says Kofi punched him repeatedly, and he only fought back in self-defense, with Kofi eventually leaving the cell under his own power. But Lee heads down to the prison and checks one of the cells, closing the door behind her, which locks shut. She runs this information up to the prosecutor Fiona, who questions Carlo: If Kofi came into his cell and shut the door, how did he leave again? Carlo’s lawyer scrambles to explain that his client may have been confused, while Carlo calls Fiona “a stupid c—t” from the witness stand. (Yeah, not the smartest move, buddy.) Fiona hammers the point home by showing surveillance video of Kofi entering the cell — and the door never closing.

Speaking of stories unraveling: Nancy goes to the graveyard where Michael’s wife is buried, and a homeless Marine distinctly remembers seeing Michael and Adam there… but on October 10, a day after they said they were there. (He remembers the date because it’s the anniversary of a bloody firefight he survived in Vietnam.) She confronts Michael and can smell the lies on him, and Charlie pulls him aside, too, sharing that he knows Adam killed Rocco. Michael confesses to his friend that it looks like Carlo will be found guilty, and “I need it to be not guilty.” So Charlie goes to Nancy with an offer: He pledges to clean up all the police corruption once he’s elected mayor… if she’ll cover up for Michael. 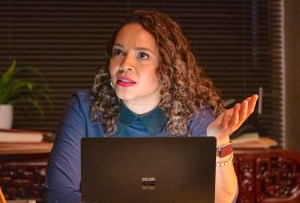 Lee tells Michael that Kofi’s brother Eugene is ready to testify that Kofi went to Carlo’s cell to tell him he didn’t kill Rocco. She knows Kofi didn’t do it, and she wants his case reopened. When Michael balks, she gets angry and starts thinking Michael was the driver — until Eugene remembers him jogging up to their house that day. Lee pieces it together: It was Adam. Michael looks resigned, but turns venomous when Lee is ready to bring in Adam, telling her to “kill Adam, cleanse your soul.” It’s Michael’s soul that needs cleansing, Lee fires back, in disbelief that he lied to her so much. (When he tries to touch her, she jerks away in disgust.) He tears up, offering to go to the cops and say it was him behind the wheel. He says he’s ashamed and still wants to be with her, and she slaps him square across the face: “Stop talking about yourself!” There’s only one way to solve this, she says: Put Eugene on the stand, exonerate Kofi, put Carlo away “and your soul gets a second chance.”

Michael doesn’t take that chance, though: When he sees Adam and Fia holding hands, and then Fia sitting with the Baxters, he orders the prosecution’s case closed and bars Eugene from testifying. A bitter Lee tells Eugene that Michael “is not the man I thought he was.” (She also gives him cash from Michael in exchange for that baseball.) In a clandestine meeting with Jimmy, Michael insists Lee won’t be a problem, while Jimmy wonders if the judge has any moves left. He has one, it turns out: He goes into the courtroom alone and fakes a note from a juror, which allows him to play the 911 call in court while blaming Rocco’s death again on Kofi. While listening to Rocco’s final breaths, Adam tenses up and runs outside… where Jimmy and Gina see him using his asthma inhaler. 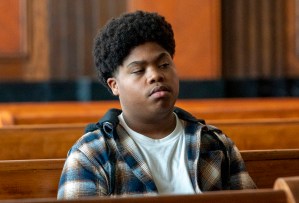 The verdict comes in — and Carlo is found not guilty. The Baxters celebrate, but Eugene is left fuming. While Fia invites Adam to her family’s celebration party, Eugene hands over his cash to a shady dealer. During the party, Jimmy calls Michael and casually mentions the inhaler before inviting Michael to come by if “you want to see what I do to your son.” A panicked Michael runs to his car, but it’s blocked in by a parked car, so he has to sprint to the hotel, where bouncers stop him at the door. Fia wants Adam to take a road trip with her to Alaska, and she wants to leave right now, but Jimmy comes over first and gives Adam an ominous hug. Michael tries again to get past the bouncers, and in the chaos, Eugene slips past them inside — and pulls out a newly purchased handgun. He has Carlo in his sights, but when he fires, the bullet hits Adam in the neck instead. As Eugene drops the gun and runs, Fia screams over Adam’s bleeding body, and Michael rushes inside just in time to cradle his son’s body as he dies. The tragic justice that Michael worked so hard to prevent… it happened anyway.

Give the Your Honor finale a grade in our poll, and then hit the comments and share your thoughts. (Plus: It’s still officially a limited series, but would you watch a Season 2?)