The following contains major spoilers from the Feb. 14 episode of ABC’s The Rookie.

This week on The Rookie, Officer Jackson West (played by Titus Makin) went “all in” in his quest to take down his TO, Doug Stanton (Brandon Routh). Alas, just as he set out to do so — by first apologizing to Stanton for his slip-up that got him a blue page, and then begging to keep riding at his side — the precinct was shut down due to a bomb threat. Meaning, if West and Stanton took a potentially problematic call, anyone who might respond to offer backup was locked down inside the station.

Cruising the streets, Stanton was spoiling for a fight, claiming that every “thug, lowlife and banger” would be aiming to take advantage of the neutered police station. Jackson diffused one unwarranted confrontation, leading to a blowup with Stanton, who threatened to get him fired; Jackson in turn threatened to sic his dad on Stanton’s “racist ass.” After a detente of sorts, they followed a suspicious SUV into a sketchy apartment complex, and then set out on foot to find its owner, the officers got split up. Jackson ran into a small but aggressive group, and got jumped and beat on. Stanton came around a corner and spotted the beating from afar, but, with his body camera off, kept his distance instead of offering help. He started to double back when he ran into an arriving Bradford and Chen, and claimed he and West got separated. Returning around the corner, the officers found Jackson seemingly lifeless on the pavement, his attackers gone.

When Stanton knelt at his rookie’s side, feigning distress, a bruised, bloodied Jackson mustered enough strength to reach up and switch back on his TO’s body cam — meaning, the preceding and damning two minutes of Stanton’s actions had been recorded. After accessing the video on site, Sgt. Grey asked for Stanton’s gun and badge, putting him on administrative leave. Later, at the hospital, Grey stood in awe of West’s honor and bravery, and thanked him for reminding what their job could be.

TVLine spoke with Jackson’s portrayer, Titus Makin, about the harrowing takedown of Stanton — and what about the storyline was hardest for him, personally, to portray. 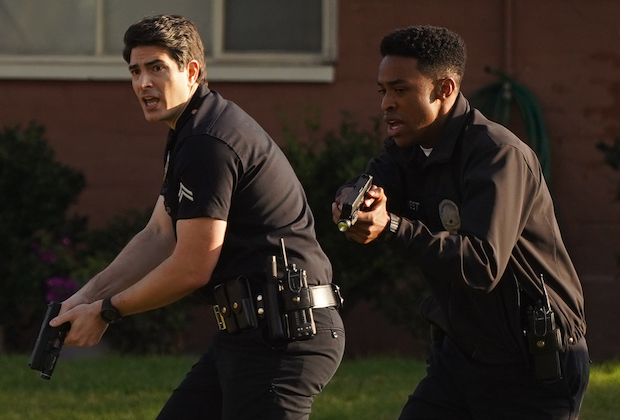 TVLINE | Sgt. Grey (Richard T. Jones) had totally given Jackson an out, after Stanton got wise to everyone’s suspicions. What did you think of Jackson‘s decision to nonetheless go for it, saying, “I want to do this”?
I loved it. It was full of integrity and faith and courage. Honestly, this has been one of my favorite seasons, seeing Jackson coming into his own and using his voice and being as strong as we’ve known he could be this whole time. We really get to see him pull through on his strength.

TVLINE | That exchange that he had with Stanton outside their shop, where he played the “My dad isn’t part of Internal Affairs, he runs it” card — do you think he knew it would be an ace in the hole, or could have kind of gone either way?
I think it very well could have gone either way. I mean, he comes from the [family] tree that he does, and his dad’s going to do what’s right as well, but it’s not something that he can just use as a blanket statement any time. Jackson knows that this is a situation where it actually will take full effect, like, “Oh, you think this, but I’ve always had a one-up on you. I’ve just chosen to stay in my place until now. Don’t try to low blow me because I guarantee you, you will be not happy.” 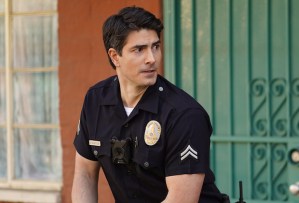 TVLINE | When they responded to that call in the projects and both went running in, do you think Jackson’s mind proactively thought, “There might be an opportunity here at some point to get the goods on Doug”? Or was it only when he was on the ground getting beaten?
Personally, I don’t think that there was anything [on his mind] until after the fight. I don’t think there was anything that Jackson was trying to do other than report to a call and do the call correctly. It wasn’t until Jackson, in the midst of getting beat up, saw that Doug was nowhere to be found but knew that there’d always be evidence. So it’s like, “OK, if this is happening to me and he didn’t come to my call, to everybody else it will look like he was looking for me, but I know that he wasn’t that far.” [Turning his body cam back on] is a perfect way to run that back a few minutes and see where he really was, and what was really going on during that time.

TVLINE | I like how they laid the foundation for that twist earlier in the episode. So even if a body cam is off, when you turn it back on it’s actually been recording the last two minutes?
I don’t know the industry standard, how far it goes back, but yeah, somewhere around that two-minute mark. No matter what cop it is, if you turn your camera on it can go back as far as two minutes prior to you turning it on. That feature is on their camera  o protect themselves but also for the protection of citizens as well.

TVLINE | What did you think of the Doug Stanton character as the show’s example of a bad cop?
Unfortunately it was extremely accurate. It is the worst version, of course — depicting the unfortunate reality of “the worst truthful cop,” if that makes sense — but they’re out there. There are cops like that. We’ve seen them, and we unfortunately have seen the repercussions of what they do when ego’s involved and racism’s involved. I commend Brandon [Routh] for being strong enough and willing enough to play that character even though it goes against everything he stands for as an actual person. 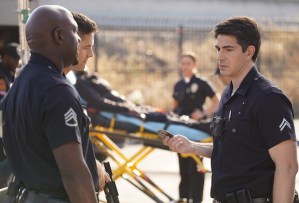 TVLINE | A nice little bond forms between Jackson and Grey at the end there, in the hospital room. Is that something that’ll last?
I loved that moment. That’s literally one of my favorite scenes that we’ve ever done on the show, that exchange between Jackson and Grey — and that is something that I hope they do continue to kind of play out, because I think it’s really cool that they show two Black cops having that conversation. It’s a really beautiful bond, seeing two cops wanting to do what’s right, along with the rest of the cops on the show.

TVLINE | It was just a couple episodes ago where Grey, with his wife, was questioning what all he could accomplish, reconciling his very reasonable expectations. But in that hospital room, he was like, “You showed me, Jackson West, that change can be made.”
And I think that’s a beautiful commentary on, like, the generations and what we’re seeing today. From the back end of Millennials to Gen Z, these kids are really stepping up and stepping out and using their voices and really being confident. I’m not in Gen Z and it has inspired me. Grey comes from a generation where it was better to sit back and be quiet and make change by example, but this generation is like, “OK, we need to make change vocally and right now.” This was a really beautiful depiction of those two worlds colliding and seeing how they could really behoove each other.

TVLINE | I know that Michael Beach (who plays Commander Percy West) is on, like, half the TV shows in the world, but are we going to get a scene with Jackson and his father in the aftermath of this?
Oh, yeah, there’s tons of good old Mr. West. He’s back and forth quite often, so that’s exciting.

TVLINE | And have we seen the last of Doug?
You know what? I don’t know. I genuinely don’t. We’re still filming, and pop people in and stories come up left and right, so I wouldn’t be surprised if there’s more Doug.

TVLINE | The police unions and their lawyers are really tough on this stuff, they will fight it tooth and nail — that’s why it’s hard to get bad cops off the street — so I could see him resurfacing as part of any litigation.
Right, and if we’re staying as accurate with the reality of all that as we have been trying to, then I’m quite positive that Doug will make some type of comeback somehow.

TVLINE | Lastly, what was hardest about this storyline for you, personally?
Just the reality of it all, being in those scenes, in those moments and telling such unfortunately truthful stories. These things haven’t directly happened to me, but just imagining being wrongfully arrested or attacked or having a gun held in your face, just because you’re viewed as a threat, was devastating. I was genuinely with Jackson in some of those moments when it’s like, “Do I try to do what I’ve been taught, or listen to the organic me who wants to defend myself against Doug?” That wear and tear, I definitely felt, and that was hard for me as not Jackson West to not intervene myself and call Doug out.