A TikToker with political connections, a speedo-clad model with a Zoolander complex and a reality competition veteran with a grudge against Meghan Trainor were among the standout auditions (for better or worse) as American Idol returned to ABC for its 19th season on Sunday.

Let’s get that first one out of the way: No conversation about the premiere’s most memorable moments would be complete without discussing Claudia Conway, the daughter of former Donald Trump senior advisor Kellyanne Conway. Joined for in-person support by her father (and virtually by her mother), the 16-year-old presented her best attempt at Rihanna’s “Love on the Brain” for the judges. Like most of us, Katy Perry was probably hoping for better, so she let Conway try again.

For her second, shoeless attempt, Conway went with Adele’s “When We Were Young.” Putting on her therapist hat, Perry encouraged Conway to channel her real-life pain into the performance. (“You lost your youth because you weren’t able to experience it on your own without all this noise,” Perry told her.) It was a lot.

The second song wasn’t much better, but with two out of three judges on her side, Conway was still sent through to Hollywood. Luke Bryan was the only judge to give her a no, acknowledging that she’s “a little ways away on the singing aspect.” Let’s be real, any other contestant who received a critique like that would probably get three no’s. Lionel Richie appreciated that Conway was “stepping forward and announcing who [she is],” which is apparently more important than actually having the vocal chops to compete in the competition. It’s auditions like Conway’s that make me wish someone with Simon Cowell’s honesty was sitting on that judges’ panel.

Read on for more golden ticket recipients highlighted in the premiere… 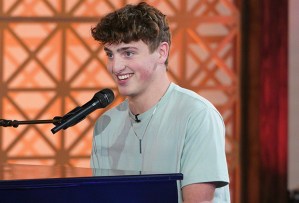 BENSON BOONE, 18 | True TikTokers don’t need to tell you they’re on TikTok. You just know it. Usually from their hair. Anyway, that was exactly the case for this Energizer Bunny, who showed off his backflip skills before surprising the judges with a lovely rendition of “Punchline” by Aidan Martin. He may be anti-thirst trap, but Perry brings up a valid point — Boone’s does rhyme with swoon. So now I don’t know what to think.

ALEX MILLER, 17 | When this unassuming youngster sauntered into the room, the last thing I expected was for him to sing an original song about his clingy ex-girlfriend. Yet that’s exactly what he did (“I got over you, so get over me!”), and his voice answered all my questions. That thing has dirt on it. In fact, Bryan was so delighted by Miller’s pipes that he requested a duet of “Big City.” Needless to say, this guy is about to become the most famous person in Lancaster, a town so small they “have to count the cows and chickens to get a census report.”

JASON WARRIOR, 25 | Remember Fox’s short-lived singing competition The Four? Warrior remembers. It’s where Trainor gave him the “no” that derailed his budding career in the music industry. Or was it the fact that he lashed out at her for rejecting him? Either way, Warrior no longer thinks of himself as being “all that and a bag of chips with hot sauce.” A much humbler version appeared before the Idol judges this week, absolutely destroying Marvin Gaye’s “What’s Going On.” After sending Warrior through to Hollywood, Perry told him, “It sounds like you were on the wrong show.” (That that, ghost of The Four!) 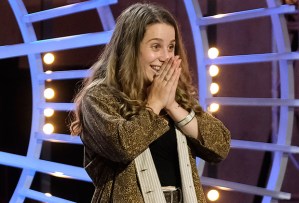 ANILEE LIST, 20 | Diagnosed with Tourette syndrome at a young age, this talented songstress cites former Idol contestant James Durbin as her personal inspiration. (He even sent her a video message, which was pretty adorable.) Yet List was the one who did the inspiring this week, wowing the judges with a beautiful performance of Aaron Taylor’s “Blue.” Perry called it “one of the most technically perfect vocals” they’ve seen on ABC’s Idol, while Bryan added, “No one needs to critique your voice.”

DJ JOHNSON, 18 | The sixth child in her family (of 10!), Johnson broke the judges’ hearts with an original song about the mother who walked out on her. It was already a hopelessly emotional situation, but with Johnson’s father standing in the room listening to her perform, the emotions were cranked up beyond reason. I don’t blame Perry for sobbing at the table, either. That said, I didn’t necessarily love the performance. And I can’t help but wonder how the judges would have responded without Johnson’s entire backstory at their disposal. Here’s hoping she proves me wrong in Hollywood.

NIA RENEE, 17 | None of the judges were ready for what this vocal machine had in store for them. The power in Renee’s voice blew Perry back in her seat, and her strong runs left the boys visibly impressed. She brought an infectious energy to her performance of Aretha Franklin’s “Chain of Fools,” prompting to Bryan to wonder if she’s the new Idol‘s “best soul singer ever. Richie concurred, “We’ve never had anything like that.” 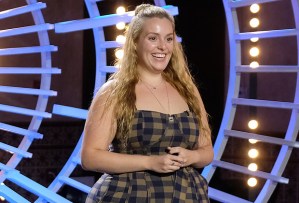 GRACE KINSTLER, 20 | With the spirit of her late father surely watching over her, Kinstler demolished “Midnight Train to Georgia,” but her audition didn’t end there. Curious to see more of what she could do, Perry asked Kinstler for another song. She settled on “Natural Woman,” under the strict instruction that she sing it at a level befitting the legends who wrote (Carole King) and recorded it (Franklin). Gee, no pressure there, right? Fortunately, Kinstler was fully up to the challenge, delivering a rendition unlike any Perry had heard before.

Of course, it wasn’t just the good singers we’ll remember after tonight. I enjoyed watching Perry purchase the jacket off of Ryan Romano’s back, a decent consolation prize after not making it through to Hollywood; I cringed as poor Danice Steakley’s singing was thrown off by her pushy father’s questionable guitar playing; and I loved every minute of screen time spent with Mario Adrion, a speedo-clad model who bravely inspired other models to be more than just beautiful. In all seriousness, while the human Zoolander was a little over the top, at least his segment was fun. That’s something this show has been sorely missing in recent seasons.

Did any of Sunday’s auditions speak to you? Vote for the contestants you’re already rooting for in our poll below, then drop a comment with more of your thoughts.