This week on WandaVision, Halloween set the stage for some spot-on costumes and more than a few scares.

Episode 6, titled “All-New Halloween Spooktacular,” kicked off with opening credits that mimicked the style of Malcolm in the Middle and lyrics that warned, “Don’t try to fight the chaos” and asked “What if it’s all an illusion?”

The Maximoff home scenes were for the first time shot as a single-camera comedy versus a standard sitcom, and we learned that Tommy fancies himself “the cool twin,” while Billy (whose purple/red costume is akin to his Wiccan alter ego in the comics) is a “Dorksasurus.” The lads are trying to make sense of their manchild uncle, Pietro, who is asleep on the sofa until he chases them around the house at superspeed, pretending to be the “vampire” they think he is. Wanda comes downstairs in a Scarlet Witch-ian costume, though she claims she is a “Sokovian fortune teller.” That causes Pietro to reference/quick-cut to the lousy costumes their mom made for them back when they had typhus, though Wanda can’t quite echo the memory. (“You’ve probably suppressed a lot of trauma,” Pietro suggests). Vision comes downstairs in a version of the character’s classic yellow/green outfit, though he passes himself off as a Mexican wrestler. Vision says he has Neighborhood Watch duty, so Pietro offers to take the kids trick-or-treating with Wanda, quickly changing both himself and Tommy into Quicksilver-y costumes (though with Wolverine hair?).

Meanwhile at SWORD, everyone is just returning from the scene where Wanda delivered their damaged drone, with Monica and Jimmy chiding Hayward for his ill-advised plan to start a war he cannot win. Hayward declares Monica to be an “impediment” to their mission, given her established affinity for powered peeps such as Carol Danvers, and further says she doesn’t have the stomach for this job — so he orders her, Jimmy and Darcy removed from the base. But on the way out, Monica and Jimmy KO their escort, and change, with Darcy, into SWORD slickers. 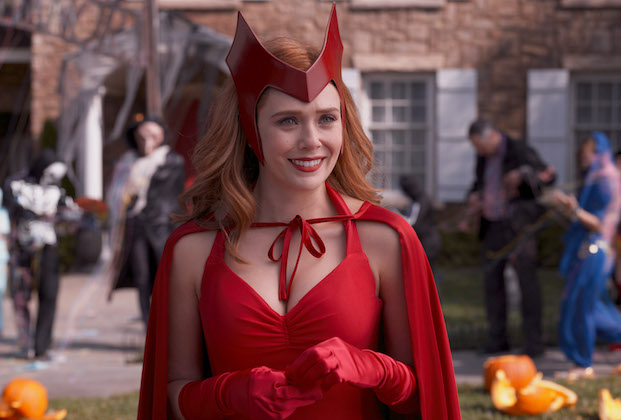 Whilst trick-or-treating, Wanda asks Pietro to share a memory about their orphanage days (and wonders aloud why he looks different), and he suspects she is “testing” him. Elsewhere in town, Vision sees a lady hanging decorations but clearly “stuck” in a loop, a single tear inching down her cheek. We then cut to a Claymation-type commercial for Yo-Magic yogurt, which a “helpful” shark offers to a hungry boy stuck on a desert island — except the kid then ages into a skeleton when unable to get the lid open.

Wanda and Pietro are passing by the local moviehouse (showing The Incredibles and The Parent Trap) when he reveals that he has just been “playing a part” since arriving. “Isn’t that what you wanted?” When Wanda asks what happened to his Sokovian accent, he rightly counters, “What happened to yours?” Pietro says his recent past is a bit “fuzzy,” that he had just been “shot like a chump” (by Ultron) when the next thing he knew, Wanda was calling/needing him. When it becomes clear that young Tommy has superspeed like his uncle, Wanda warns him to take things slow, and to take his brother with him for more trick-or-treating — as long as they dont go past Ellis Avenue.

Sneaking back into a SWORD tent, Monica, Darcy and Jimmy catch a bit of Wanda’s feed, with Darcy noting that Pietro “brought the wrong face.” Hacking into Hayward’s devices, Darcy gleans that he is tracking Vision’s vibranium signature — but why? She also notices that the people near the edge of the Hex are barely moving. Vision is approaching that same area and finds everyone indeed frozen. (Clearly the creator of the Hex doesn’t have enough energy to animate everyone at all times.) Vision transforms into his real self and floats up to observe SWORD’s spotlights along the perimeter. He flies over to an intersection — Ellis Avenue — just inside the perimeter, where he finds Agnes frozen inside her car. When Vis zaps her out of her fugue state, Ages remarks, “You’re one of the Avengers! Are you here to help us?!” But Vision seems unfamiliar with his Avengers past. Agnes worries she is dead, since after all, he is “dead, dead, dead!” Vision shares his intent to reach the people outside, but Agnes laments, “No one leaves… Wanda won’t even let us think about it.” Vision interrupts her cackle that follows by zapping her back to her other self, and then walks off toward the perimeter wall.

Monica gets word that her Hex-busting ride will be ready within the hour, and she and Jimmy head out to meet her “guy,” while Darcy stays behind to crack Hayward’s final firewall. But Darcy first warns Monica about breaching the energy field again, since the past two times have rewritten her cells on a molecular level: “It’s changing you.”

Sitting down at the Town Square Scare, Pietro asks Wanda, “Where were you hiding all these kids until now?” He suggests she had them asleep in their beds; after all, “No need to traumatize them beyond the occasional holiday-episode cameo, right?” He then commends Wanda for how well she handled creating Westview, keeping families and couples together, and keeping personalities pretty close to what’s beneath. “You don’t think it’s wrong?” asks a surprised Wanda. No, Pietro says he is impressed! “How’d you even do all this?” he curiously asks. “You can talk to me.” Wanda searches herself, and admits, “I don’t know how I did it. I only remember feeling completely alone. Empty….” Grazing Pietro’s hand, she has a jump scare when for a moment she sees his bullet-ridden self!

Monitoring SWORD’s scans, Darcy sees that Vision is nearing the energy field, and he indeed slowwwwwly and quite agonizingly forces himself through it, as Hayward and his agents rush out to simply watch. As Vision struggles, he begins to deteriorate, pieces of him getting sucked back into Westview. Billy meanwhile “hears” Vision’s cries, and tells Mom that Dad is in trouble. When Pietro quips, “Don’t sweat it, sis! It’s not like your dead husband can die twice,” she blasts him aside. Billy says that he “sees” soldiers, and that Dad is dying. Wanda quickly freezes everyone in town, then unleashes a pulse that gets the perimeter wall moving outward. As it moves farther and farther out, it transforms Vision back into his healthy self…. SWORD tents, agents and vehicles become carnival tents, clowns/entertainers and funnel cake trucks… And Darcy, who got nabbed/handcuffed to a truck, well, we don’t know her fate just yet. Hayward and a few agents manage to outpace the expanding wall in a speeding truck, but realize they are unable to hail anyone else.