The Blacklist had an unenviable task ahead of it with Friday’s episode: Memorialize actor Clark Middleton, who passed away in 2020, and write out his recurring character, Glen, in an effective way.

The resulting hour, titled “The Wellstone Agency,” managed to do both of those things with a moving farewell to both Middleton and his alter ego. Though the episode also furthered Red’s pursuit of Liz, its more poignant focus was the loss of Middleton’s DMV regional manager, who died from West Nile virus as his portrayer did in real life.

But sprinkled among the episode’s somber moments — like Red’s heartfelt eulogy for Glen, delivered at the Statue of Liberty — was some levity, including the strange and amusing plot twist that Glen had claimed to have a years-long friendship with singer Huey Lewis. The two men had no such relationship in reality, but in the spirit of preserving the lie and not leaving his mother devastated, Glen had posthumously tasked Red with tracking Lewis down and persuading him to attend Glen’s memorial. (Against all odds, Red pulled it off, and Lewis guest-starred as himself in multiple scenes.)

Below, Blacklist EPs Jon Bokenkamp and John Eisendrath explain how Lewis’ appearance came to be, among other details of the sweet tribute episode.

TVLINE | In a previous interview, we spoke briefly about how you’d address Clark’s death on the show, and it sounded like having Glen pass away was the best fit. Why did Glen’s death feel most suitable, as opposed to writing him out in another way?
BOKENKAMP | We always kick around every idea — good and bad — so yes, we did explore ideas where maybe Glen got fired, or went on a vacation, or maybe we just don’t see Glen again. But Clark was such an important part of The Blacklist that it didn’t take long for us to embrace the idea of recognizing his death within the narrative framework of the show. In fact, it would be weird for us to not acknowledge it. Once we embraced that idea, we felt like we had an opportunity, not only to talk about Glen — who he was, and what he meant to the show — but we had an opportunity to pay tribute to Clark Middleton.
EISENDRATH | We loved Clark. Acknowledging his passing on the show gave us the chance to eulogize both the character he played on the show and, to a certain extent, the man himself.

TVLINE | On a similar note, Glen’s cause of death is noted as West Nile virus — the same as Clark’s cause of death in real life. Was there ever any thought of changing Glen’s cause of death, or did it feel most appropriate to honor what really happened to Clark?
BOKENKAMP | Honestly, during this time of COVID, with so many people dying tragically, it was a total shock when we learned that Clark died from West Nile. It was just so random, strange and unexpected. We thought, “Well, that is what happened. It caught us by surprise, and maybe it should catch the characters on our show by surprise.” 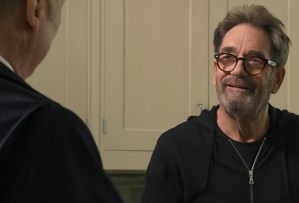 TVLINE | How did Huey Lewis’ appearance come together? Was he always the celebrity named in the script, or did you have to tweak that based on who you could get on the show?
BOKENKAMP | First off, I’m a huge Huey Lewis fan. I’ve always loved his music. My kids now love his music. And we were desperate to get him into the show. But the truth is, one of my dear friends, Kurt Kuenne, is a frequent director on The Blacklist and also happens to be working on a new documentary about Huey, and he’s gotten to know him quite well. So when the show made the offer to Huey, I called Kurt and begged him to please reach out directly and explain that this isn’t just another episode of television, this is a tribute to a guy that the show, and fans of the show, absolutely loved. Huey totally got it. He was a great sport, a total pro and he’s absolutely really fantastic in the episode.

TVLINE | And I loved Red’s eulogy for Glen, just a really lovely scene to end the episode. In writing that monologue, did you feel any sense of responsibility, or pressure, to be eulogizing Clark at the same time? Was it a difficult monologue to get just right?
BOKENKAMP | What James [Spader] does in that monologue is just astounding. It really is one of my favorite moments of the series. The time he takes and the emotion he brings to the scene is just beautiful. As far as the words — this is probably no secret, but that speech isn’t so much about Glen Carter as it is about Clark Middleton and how much we are going to miss him. He wasn’t just a great actor, he was a really sweet and smart guy, and I feel blessed for the time we got to spend together.
EISENDRATH | [There wasn’t] pressure, so much as a desire to honor how we felt about him. He overcame some significant hurdles in his life. There’s a fearlessness in that, and that fearlessness was fundamental to his connection to Reddington. Spader spoke to that on the show as a way to honor Glen. We hope, in some small way, it honored Clark, as well.