When it came to casting Search Party‘s eccentric, glamorous and often talked about Lylah, the show’s EPs knew they needed a stunner.

“Early on, we were like, ‘Whoever plays Lylah has to be the most exciting and incredible casting you can imagine,'” co-creator Charles Rogers told TVLine.

Stage and screen veteran Susan Sarandon was more than game to dive into Search Party‘s special brand of kooky comedy. For two episodes of its fourth season, Sarandon plays stalker Chip’s extravagant aunt, who’s called upon to track down her nephew once Dory’s abduction becomes a liability for her family. Always dressed to impress, Lylah eventually discovers Chip had been hiding Dory in the basement of her Massachusetts home, and actively attempts to cover his tracks, all while harboring a scandalous — and super gross! — secret of her own.

Sarandon, whose recent TV credits include Ray Donovan and Feud: Bette and Joan, says she was happy to return to the small screen and step into Lylah’s shoes… along with her dazzling wigs and luscious fur coats. Here, the actress talks to TVLine about why Search Party was so enticing, her character’s super-dark family history and her recent TV binges — including which powerhouse performance made her feel “like a p-ssy.”

TVLINE | Your character was by far my favorite part of Season 4. What were your first impressions of Lylah, and what made you want to play her?
Honestly, I didn’t know what they were going to come up with, I just loved the show and Charles [Rogers]. Cole [Escola, who plays Chip] I know because of Amy Sedaris and Todd Oldham, and I thought they were a talent. So even before I knew what the script would be, I thought, “Oh my god, this will be fun and kind of scary.” I just wanted to work with them and was up for the fun of it. John [Early, who plays Elliott], too. I thought the whole cast was so talented and kind of unexpected.

It was a little bit like when I went into Rocky Horror, and everyone was like, “What are you doing?” and I was like “Oh, I don’t know, I think it’ll be fun!” I sound like Helen Hayes or something, but we have to really encourage people who are coming up with something that’s fresh and daring. Also, I felt like the show, even though it’s so outrageous, hits upon some interesting avenues of exploration and self-analysis. It gives you a chance [to explore] loneliness, peer pressure, honesty and identity. I love the way their minds work. When I got there, I was really happy I’d made the choice. We slid it in right before everything got locked down. That was lucky. And I get to wear a wig… you can’t say no to that! And fur coats all the time!

TVLINE | Oh, I definitely wanted to ask you about Lylah’s fashion! Did you get to keep anything from set? That flashy gold chain and coat were particularly fabulous.
Look, I gave them back hoping that they were going to keep them for the next time I’m on the show. I felt if I was generous and said, “You just hold on to that, honey, so you’ll have me back!” I’m hoping they find a way to keep Lylah in there if they do another season. [Editor’s note: Search Party was recently renewed for Season 5.] So no, I didn’t keep anything. I just kept Cole, John, Alia and Charles as friends that I can text and DM, so that was better than any gold necklace.

TVLINE | You checked off another question on my list… whether you’d play the character again.
Oh, yeah. Definitely. I don’t know what the plot would be, but Charles said, “You’ll come back if we come back.” They work really well together, and they were so, so welcoming to me and couldn’t have been nicer. I think of it fondly ,and I’m happy you enjoyed it. I would love to do her again. Absolutely.

Of course, Griffin [Dunne, who plays Richard Wreck, Chip’s father] and I go way back, so it was a shame we didn’t actually see each other. But I look forward to maybe having work with him if they figure something out for us in the future. We had formed an improv group a long time ago that would meet with a bunch of others like Madeline Khan, Paul Dooley, Peter Boyle and Carol Kane. So, I know Griffin from the early days, and I love the fact that at least over the phone we’re connected.

TVLINE | Did [co-creators] Charles and Sarah-Violet [Bliss] pitch this character to you, and if so, how did they explain her?
He just said it was a small, but pivotal part. I don’t mind if something isn’t big, but the character has to have a reason for being there. Because my experience has been that sometimes I’ll do something to help people get their money, and then when the thing comes out, it’s practically cut out because it’s not really necessary. But Charles said, “You’re definitely a plot twist. We need you in there.”

Then, I met with the wardrobe people who were fabulous… these outrageous fur coats every single time! You’re probably too young, but in the early days of music videos, everybody’s clothing would change like 17 times in a video. I always thought that would be really fun, with absolutely no bow to anything real. Every time we see her, it’s something different. [Laughs] 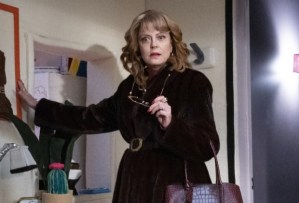 TVLINE | That totally would’ve fit the character!
And I couldn’t believe when I got to the set and that room was all done. The room that [Chip] recreates for her apartment is all squishy and felt. I was just like, “Wow, this is genius.”

TVLINE | So you didn’t know about Lylah’s incestuous storyline with her brother then? What was your first reaction to that?
I loved it! That scene was a little bit longer and delved even more sexually. Then, they put that little piece in where I say, “Find a penny, pick it up, kiss your brother ’til he’s all grown up,” which I guess hints at it, but it was more obvious in the original script. I thought that was wild. If someone is clever and creates outrageous characters with really fun storylines, you can play it so straight. You don’t have to push at all. And that’s really so much fun to be able to say those lines, and say them sincerely and straight as if it’s not a big deal you just saw a room full of chains. [Laughs] I love Lylah and her moral bottom line. What she finds offensive and her whole bubble she’s been in for how long, and her whole classism thing is really funny, too. Her entitlement gene is pretty enormous, especially for a woman.

TVLINE | Did you have a favorite scene from your time on set?
I loved working with Cole any time we got to do more than a few screaming lines at each other. They are so talented and so sweet, and that was very special. I wish I had more things with all the kids because I really admired all of them. I found them so professional, really on it all the time.

I’ve got to say the whole idea of the car going around in circles in this never-ending roundabout [in Episode 7’s “The Infinite Loop”]… just reading that made me laugh! I hope it worked well for other people, too, because it was stupid, but really fun to do. When I saw it, it did not seem as nauseating as it felt when we were driving. It seemed faster and made me dizzy! It didn’t seem like it when we saw the final [episode], but trust me, it was really uncomfortable after a while! It was like an actor’s nightmare.

TVLINE | Lylah seems completely unbothered by the dead body in her freezer and chains in her basement. Despite seeming warm in certain scenes, she’s completely OK with burning Dory alive. Do you view her as a villain?
I think she’s trying to protect her family, and [other] people are dispensable. She was raised that way. I think ruining her reputation would be more upsetting to her than throwing someone down the stairs. The lives of those lower people are just very cheap for her. She could’ve been a plantation owner. She must have that in her DNA somewhere. To her, the whole world is there to serve her.

If we want to get really dark, you’d think she was probably molested. The whole thing is very depraved. She came of age at a time and in a family where anybody took whatever they wanted. Whoever was in power just took it and that was seen as not only your right, but to be admired. They protect their own. She feels completely protected and above the law and absolutely will not be held accountable. She’s royalty in that sense. 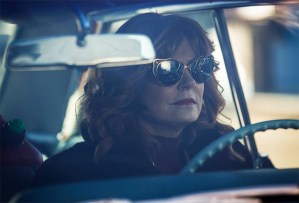 TVLINE | There are so many things off about this family. It makes me wonder what other skeletons are in their closet.
Oh, yeah, definitely! I think they’d have a walk-in closet full of skeletons. I know lesser versions of this family who are beyond the law, and every time somebody gets picked up as a kid for shoplifting or drugs or rowdy behavior of some kind, they’re constantly bailed out. The experiments with how they indulge themselves just get bigger and bigger. That definitely happens.

TVLINE | You’ve done all kinds of characters throughout your career, but when you’re considering a new role, what do you look for? And does that change depending on whether it’s a film or a series?
I think my criteria has always been: if the part is fun, if you’re going to be working with people that excite you, who’s the director, why does the director want to do it. The problem with TV is that you don’t get the script. You don’t know what’s going to happen, which is a very interesting way to shoot. But also trying to keep the standard of the writing up for even eight or nine episodes… you never know what you’re getting into, so you have to make your peace with not knowing.

But also, TV is much more daring these days than film. They don’t have to be selling to such a wide audience. I don’t think Thelma and Louise could be made now. A lot of the things I did, if they had to pass the green light from a board of executives at a studio, would maybe not get made. They just homogenize so much these days in an attempt to appeal to everyone. But then you get Netflix and HBO and Starz — I don’t even know all the platforms, but I’ve learned a lot since I’ve been in lockdown!

TVLINE | Haven’t we all! What have you been catching up on?
I have a projector, so I watched all of Mad Men, which I had never seen the whole thing, and I went back to Twin Peaks, which is also amazing. Talk about something that was daring at its time! I look back on it now and it was insane! So, I’ve knocked off these shows that I really hadn’t had time to see. Peaky Blinders! Helen McCrory… I felt like a p-ssy when I watched what she did. She was unbelievably strong! Oh! I May Destroy You. Un-f–king-believable what [Michaela Coel] did. I can’t praise that enough, in the way that it’s filmed and the way that it’s written. It was so unexpected!