CBS All Access’ adaptation of The Stand got much more than Stephen King’s behind-the-scenes stamp of approval: King also contributed a brand-new ending to the story, which served as the miniseries’ ninth and final episode on Thursday.

As Stand co-creator Benjamin Cavell revealed at the show’s Television Critics Association press tour panel in December, the new coda was born from King wanting to give Frannie (played here by Odessa Young) another ending, one that allowed her to have her own stand against Randall Flagg after she’s unable to do so while pregnant in the book. Thus, Episode 9 finds Frannie in a new and perilous situation, one that brings her face-to-face with Alexander Skarsgard’s villain.

First, let’s check off where The Stand‘s finale does match its source material: At the start of the hour, Frannie gives birth to a girl named Abagail (in the novel, a boy named Peter) who contracts Captain Trips but ultimately recovers — a first for that deadly disease. Later, at a memorial service for Mother Abagail, Stu and Kojak safely return to Boulder, having been rescued by Tom Cullen, who also survived the trek back. And months later, at a Fourth of July barbecue in Boulder, Frannie and Stu agree that the Free Zone is getting a bit crowded (and, unfortunately, crime is beginning to increase), prompting them to take a road trip back to Ogunquit, Maine, so Frannie can see the Atlantic Ocean. 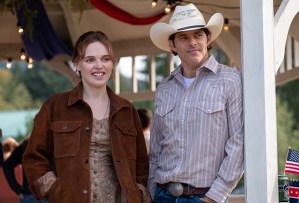 Here, though, we get to see their journey across the United States, whereas the book ends before Frannie and Stu get on the road. After crossing through and making camp in different states, the pair stops for a night in Lorton, Nebraska, where they find a decent house to spend the evening. On the edge of the property is a cornfield, not unlike the one that appeared in the pandemic survivors’ dreams about Mother Abagail — and though Frannie and Stu don’t see it happen, Kojak reaches just inside the cornfield and pulls out a baby doll, the same one that Frannie found in her very first Mother Abagail dream. And when Stu calls Kojak into the house, a thin arm stretches out from the cornstalks and takes back the doll.

That night, while Stu and Frannie sleep, the cornfield resident is revealed to be a young Black girl, who has set up her own camp in the middle of the field. “Now is the needed time,” she sings over and over, then nods to herself when she hears Frannie’s daughter crying. “Baby teethin’,” she says.

The next morning, Stu heads a few towns over to get groceries and supplies; while he’s gone, Frannie stays at the house and investigates an old water pump that’s attached to a boarded-up well in the yard. A stream of water starts to come out, then stops, and as Frannie reaches her hand into the pump to dislodge what might be in there, Randall Flagg suddenly appears by her ear. “Hello, bitch,” Flagg whispers, startling Frannie — and when she turns to see that Flagg isn’t there at all, her finger is bitten by a rat living in the pump. In her panic to shake the rat off, she collapses right through the boards covering the well, falling down into it.

While Frannie’s unconscious at the bottom, she dreams she encounters Flagg in the woods. First, he shows her a tribe of people living nearby, all of whom survived Captain Trips since they don’t have any connection to the world beyond these trees. Then, Flagg brings Frannie to a well, showing her images in the water’s reflection of Stu, whose journey back to Lorton has been interrupted by a flat tire on his truck; baby Abagail, alone and crying on the porch for her mother; and Frannie herself, who, according to Flagg, has some pretty gnarly injuries after her fall. But if Frannie just gives Flagg a kiss, he says, and lets him see the world through her eyes from time to time, he’ll take away Frannie’s injuries and let Stu get home safe. 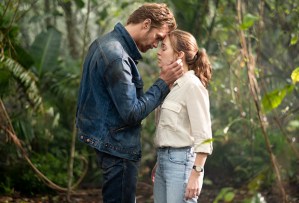 “Not if you were God himself,” Frannie resolutely replies — but she seems to hesitate when Flagg reminds her of her daughter, wailing for her mother who’s at the bottom of a well. So Frannie leans in to kiss Flagg, but instead bites his lip and runs away. “Get thee behind me, you f—king bastard,” she tells him. Then, as she’s running off, Frannie’s surroundings suddenly change, and she’s in a cornfield again; when she reaches a house just outside the field, Mother Abagail is sitting on the front steps.

Mother Abagail assures Frannie that Flagg was merely tempting her, and God will bless her for having resisted his temptation. “The wheel keeps turning. The struggle continues,” Mother Abagail says. “But the command is always the same: Be true. Stand.” Then, she reveals that she’s seen Frannie’s future, which includes Frannie raising five children. “These five will bring forth 20, and that 20 will bring forth 70,” she continues. “And some of those 70, you will live to see. You’re old. Your children will replenish the earth.” And with that, Frannie wakes up.

In the meantime, Stu has safely returned home from his trip, though he’s alarmed to see Kojak waiting for him in the middle of the road — and even more alarmed to see the young girl from the cornfield sitting on the porch steps, quietly feeding baby Abagail. The girl is small but sure of herself, and she instructs Stu to tie the cable from his truck around his waist while she lowers him into the well to retrieve Frannie. He does as he’s told, and the girl manages to bring both Stu and Frannie back up successfully.

“Give me some space, Stuart!” the girl tells Stu as she leans over Frannie’s body. Though Stu doesn’t understand how the girl knows his name, it appears she might be a reincarnated Mother Abagail, seeing as she’s wearing the same silver cross around her neck that Mother Abagail once did. And as she moves her hands along the length of Frannie’s body, Frannie’s broken bones shift back into place, and she appears entirely healed just moments later. “Now stand,” the girl instructs Frannie, and Frannie does, breathlessly telling Stu that “nothing hurts.” The girl, meanwhile, disappears as Frannie and Stu are rejoicing, though her baby doll is left behind in Abagail’s makeshift bassinet. 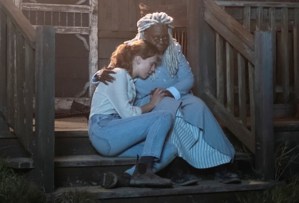 One week later, Frannie, Stu, baby Abagail and Kojak have reached Ogunquit, and they take in the magnificent sight of the Atlantic Ocean. Frannie tells Stu that while she was in the well, she saw both sides of the world: its beauty, and its “deep well of darkness — a pit.” And though she was tempted by the darkness, she came out of the experience with Mother Abagail’s words: “The wheel turns. The struggle continues. And the command is always the same: Be true. Stand.” Stu nods solemnly, and they kiss.

But… Despite Frannie and Stu’s happy ending, it appears Flagg is back. In a slightly tweaked version of the epilogue King wrote for The Stand: Complete and Uncut Edition, reprinted in 1990, Flagg shuffles into the woods where the aforementioned tribe resides, completely naked except for his boots. The tribe members immediately perceive Flagg as a threat, and one of them shoots an arrow at Flagg’s face — but Flagg catches it in midair, pantomimes shooting the man with his fingers, and the man’s face actually gets blown off.

Out of an apparent mix of fear and awe, the rest of the tribe bows down to Flagg as he levitates off the ground. And though, in the novel, Flagg tells the group that he has a mission to teach them how to be civilized, that’s not what he says here. “My name is Russell Faraday,” he announces. “Worship me!“

OK, your turn. What did you think of The Stand‘s new ending? Grade it in our polls below, then hit the comments with your full reviews!