The following contains spoilers from this Wednesday’s episode of For Life.

As the newly appointed special prosecutor, For Life‘s Aaron Wallace is doing everything he can to build a strong case against the white police officers who killed his unarmed Black client. Even if that means breaking the rules and initially making people from his own community angry with him.

The fascinating thing about this Wednesday’s installment of the ABC drama, titled “For the People,” is that because Aaron (played by Nicholas Pinnock) isn’t following the letter of the law, he has to remain tight-lipped. He can’t tell people, such as his client’s widow who angrily slapped him in the face, that he’s both the puppet and the puppeteer. For instance, he proposed a lesser charge in order to clear the path for a change of venue. Then, once the case moved, he upped the charges against the officers. 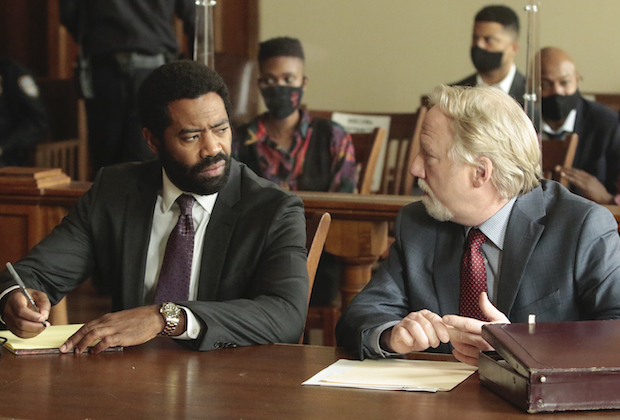 “It’s literally ‘by any means necessary,'” Pinnock tells TVLine. “And that is when the cause as a whole takes effect. Whether there are elements of that that people agree with or don’t, sometimes having to bend things to make them eventually straight is what Aaron is going through. He is taking the knocks, he’s taking the falls, he’s keeping his silence.”

“Aaron is not telling anybody what’s going on because he knows that if he does that, he jeopardizes losing everything — and there’s very little to hold on to in the first place,” Pinnock adds. “He is willing to do whatever it takes, and that just goes to show the power of what is happening and the integrity and the strength he possesses to be able to endure and pursue everything he can to get the case to a point where it’s equal, even, and rightly just.”

This week’s episode was the second in a four-part arc about Aaron taking on the case of Andy Josiah and fighting against police brutality. But, Pinnock says, depicting such injustices takes a toll.

“With that whole four-hour journey, we had tears on set, we had a lot of hushed silences, because the themes of what we’re doing on the show reflected what was going on last summer and what has been going on for a long time and currently still going on now,” he says. “It was emotionally very triggering. It was very mentally quite hard to go through because just being in the skin of Aaron in the moment, having to understand things in a way different than how we did last summer. Whenever these horrific events happen, we are completely dissociated by it because we’re not involved in it.”

“Especially as Black people, it’s something that we feel as a vibration throughout us although we’re not personally attached to it,” the London native continues. “Aaron saw Andy in hospital, handcuffed, and he was there when he got the phone call that he died. He’s got connections to his wife and his son, and he was at his burial. With all these things, you start to understand it from a completely different perspective. I understood it in a completely different way than how I, Nicholas Pinnock, understand it. It was tough but it’s highly relevant because it’s something we didn’t feel could be ignored.” 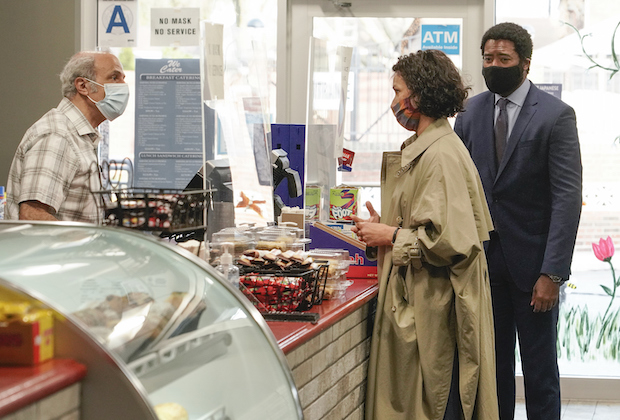 Indira Varma, who plays Safiya Masry, had her own cathartic reaction to the Black Lives Matter movement and police brutality, Pinnock says.

“There was CCTV footage that had been shot by the crew, going through the beats of when the officers shoot Andy,” Pinnock says of the video Aaron and Safiya got from the bodega. “We knew it was part of the production, but it was exactly reminiscent of the stuff you have seen on the Internet — and it was still just as shocking, even though we knew it was make believe.”

Even when art imitates life, Pinnock says, processing the violence can be just as difficult.

“It was the imagery of another Black man being shot illegally and unarmed, in the back, by law enforcement. And an image, regardless of if it’s real life or a depiction, is still going to have an effect on you,” he notes. “When you see Indira jump, that was real. She broke down in tears for about 20 minutes just from looking at the footage. Even though we knew no harm came to the actor (guest star Royce Johnson)… after we watched it the first time, we had go to a blank screen because we couldn’t watch it anymore.”

Want scoop on For Life, or for any other show? Email InsideLine@tvline.com and your question may be answered via Matt’s Inside Line.