Riverdale is growing up fast — seven years in a week, to be exact.

The CW drama kicks off a seven-year time jump with this Wednesday’s episode (8/7c), with Archie and his old high school friends coming back to Riverdale as adults after years apart. “It is really fun to start with a semi-fresh slate,” showrunner Roberto Aguirre-Sacasa admits to TVLine. “Our plotting on the show can, as the fans know, get pretty baroque and intricate, and there is a lot of baggage and history that comes with the stories we told. We thought that there was something really exciting about being able to find all our characters in completely different places and playing different dynamics.”

The writers did consider a few other options first, though, Aguirre-Sacasa reveals, including a smaller time jump that found the main characters still in college. “The other thing that we entertained was doing a huge genre shift, which is to say something like: The show becomes a horror show, or we introduce the supernatural. We did talk about that.” But “ultimately, we felt like there were stories to tell in Riverdale, and the characters were on an emotional journey that felt like it hadn’t finished yet. It feels like once you go full-out horror or zombies or whatever, it’s hard to get back to normal after that.” 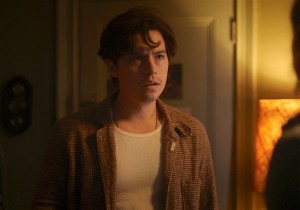 It’s definitely a new normal when the Riverdale gang returns home seven years later — and some of them even look a little different than we remember from high school. Jughead, of course, has parted ways with his signature beanie (“Hopefully, this won’t be like Felicity getting a haircut,” Aguirre-Sacasa quips) and is now struggling with a bad case of writer’s block while living as a young novelist in New York City. When the showrunner suggested to actor Cole Sprouse that Jughead might wear a different kind of hat post-time jump, Sprouse said no, but he came back with: “‘What about if Jughead has glasses and a goatee?'” Aguirre-Sacasa recalls. “And I was like, ‘OK, let’s go for it!'” 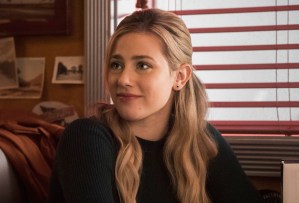 Betty, who’s now training to be an FBI agent, also looks more grown-up after losing her trademark tight ponytail. “I don’t know how many conversations I’ve had with Lili [Reinhart] over the years where she has begged me not to have Betty in a ponytail, which is so iconic from the comic books,” Aguirre-Sacasa says. But “when we did the time jump, actually, Lili said, ‘By the way, we don’t have to be completely done with the ponytail. We can come up with a looser version of it.'” Meanwhile, KJ Apa’s Archie has a shorter haircut, and as for Camila Mendes’ Veronica, the showrunner remembers, “my only thing was, ‘Don’t go too short with your hair.'”

Archie comes back to his hometown after spending years in the Army, and he finds Riverdale run down and nearly abandoned, thanks to the political maneuvering of Veronica’s father Hiram Lodge. This puts Archie and Hiram back on familiar footing as enemies, Aguirre-Sacasa teases: “Archie is fighting to bring the town back, just as Hiram fights to keep it a ghost town for his own personal agenda.” But he adds that “we see a lot of the characters in conflict with Hiram” after the time jump, including Cheryl, Betty, her mom Alice — and Hiram’s own daughter Veronica. 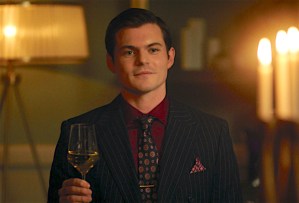 Speaking of Ronnie, she might have made the biggest change of all: She’s now married to a Wall Street trader named Chad, played by new cast addition Chris Mason (Broadchurch). Married life isn’t smooth, though, Aguirre-Sacasa hints: “We sort of thought that the worst thing we could do to Veronica is trap her in a relationship that was following in the footsteps of her mom and her father… and yet, given Veronica’s weird daddy issues, that felt very right to us.” Chad is “definitely an antagonist this season,” he adds, “and he will be a thorn in Veronica’s side, and Archie’s, and many other people’s sides as well.”

Who are you most excited to see post-time jump, Riverdale fans? Drop your thoughts in the comments below — and stay tuned to TVLine after Wednesday’s episode for more scoop from Aguirre-Sacasa on the time jump.