Before she read the script for Prodigal Son‘s Season 1 finale, Halston Sage wasn’t certain how the episode would end — but she certainly wanted it to involve a murderous Ainsley twist, a request she made known to the show’s creative team.

“I was asking for it,” Sage laughs, referencing Ainsley’s shocking transformation into a killer last spring as she repeatedly stabbed Nicholas Endicott. “I didn’t know for sure until the actual script was sent out to us, but I was very excited that was how we were going to end our first season.”

Thus far in Season 2, Ainsley has struggled to remember what happened on the night Endicott died, only recalling the brief flash of a blood-stained living room; for now, at least, she thinks Malcolm was the one to kill Endicott instead of her. And though Sage confesses that “I always want to know more information” from the writers about where Ainsley’s storyline is headed, “a lot of the time, it’s a surprise” when she gets a new episode script.

Still, Sage was able to offer a few teasers after Tuesday’s episode, which found Ainsley and Malcolm ostensibly competing to solve the recent murders of local debutantes. Read on for her insights about Ainsley’s current mental state, and whether she’ll remember more about that night in the weeks ahead.

TVLINE | In this episode, we see a flashback to Ainsley’s childhood, and she’s pleased that Malcolm couldn’t find her during hide-and-seek. And in the present day, she’s risking her safety again to solve this crime before Malcolm. Where is that sense of competition coming from?
Ainsley’s always been really passionate about her job. And now that she has a lead on a story, having gone to the actual etiquette school that the suspect is running, it gives her an in, in a way that she hadn’t previously had for any of the other cases.

She’s also overcome with this enthusiasm because it’s something she can control. There’s a really sweet scene at the end of the episode, between Malcolm and Ainsley, where she confronts him for being so hard on her, and she says, “I just needed to know why this person did it. I’m the daughter of a serial killer, I’m really just trying to understand how a human being could actually commit that kind of crime.” That’s starting to open the floodgate of memories from her trauma, and we’re going to see how that affects her later in the season.

TVLINE | She also tells Malcolm, “I have the right to be messed up, too.” Is there any part of Ainsley that’s jealous of Malcolm — not of his trauma, but of the concern he gets from people around him because they know he’s messed up?
In Season 2, the relationship between Malcolm and Ainsley has flipped. In the first season, she’s the caretaker for the Whitlys, and she’s the strong one, looking after her mom and her brother. And in this season, Malcolm has to take on that role because she’s pretty shaken up about that night from the season finale, and why she isn’t remembering things. It’s made her a little less stable than she had been in Season 1.

TVLINE | Ainsley came up behind Rachel with a small knife at the end of this episode, which of course reminds us of the night she killed Endicott. What do you think would have happened there if Malcolm hadn’t intervened?
Ooh. [Laughs] In that moment, she’s about to defend and protect her brother. That’s something I really can relate to, in terms of having siblings and knowing what it’s like to be close with your family and going to any length to protect them. I think if she thought her brother’s life was truly threatened, she might have done it again! [Laughs] 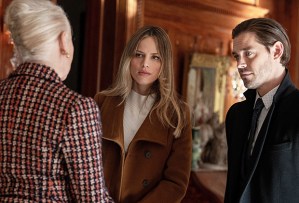 TVLINE | I really thought she might! But it did seem like she was more in control of her actions here than on the night Endicott was murdered.
I would agree with you. We didn’t see it, but it was implied that Endicott had pulled me aside, before Malcolm got to the house, and I’m seated on the couch, and he’s interrogating me and putting me in this very vulnerable position. At that point, Ainsley knew enough from her conversation with Martin that this guy wasn’t going to go away, and it was either going to be him or them. She had reached her breaking point. And like you said, in the scene from this episode, it’s a shorter time period where Ainsley has to think on her feet and figure out how she’s going to get them out of there safely.

TVLINE | What can you say about Ainsley’s memories as the season continues? Will we see her remember more, or at least want to remember what really happened that night?
Definitely. And it’s happening very soon. [Laughs] It’s been a long season waiting to understand Ainsley’s reaction, and I promise it’s coming.

TVLINE | I’m most curious about Ainsley’s relationship with her mother, seeing as Jessica knows what Ainsley did, and Ainsley doesn’t. Will that be a source of friction between them?
The mother-daughter relationship has shifted since Season 1, as the brother-sister relationship has. Jessica never had to worry about Ainsley. She was always worried about Malcolm, and she never had to think twice because Ainsley was so seemingly perfect. And now, she has to take a step back and really nurture her in a new way.